After two relatively empty days to get over jet lag, we finally had a full day tour. Our host at the villa gave us a private tour, and it was really fantastic. He took us through more of the back ways to see more villages, even though it took longer, as opposed to using mostly larger roads. It was definitely more beautiful to see that way. We started out at 7:30.

There are a few nice things about a private tour: 1) you can stop when you want to, 2) it’s pretty inexpensive here for the day. For the car/driver/gas/parking fees it cost less than $50 for a nine hour tour.

It was pouring down rain when we began, but that didn’t dampen (nyuck nyuck) our spirits. We chatted about this and that, driving past the Tegalalang Rice Terrace. The first photo stop we made was to try to take a picture of the Batur volcano. This was the best pic we could get on this rainy morning, but it was still beautiful: 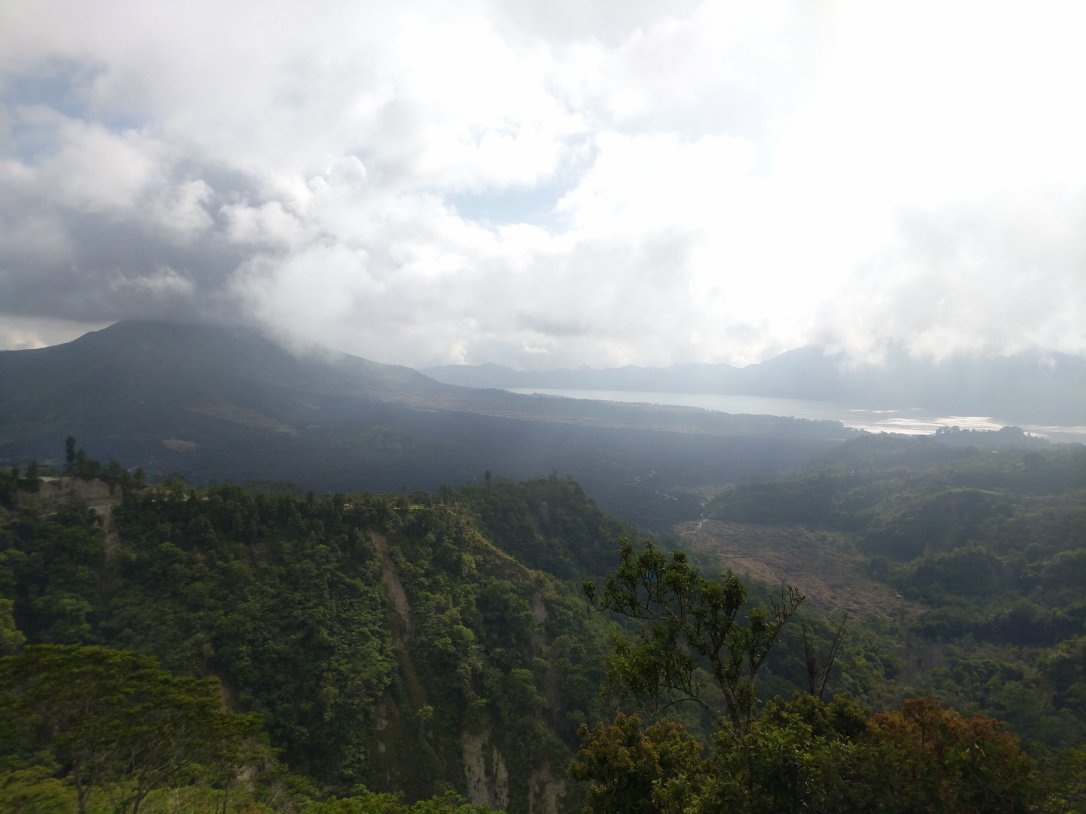 We continued on and stopped at these pretty marigold farms for a quick pic: 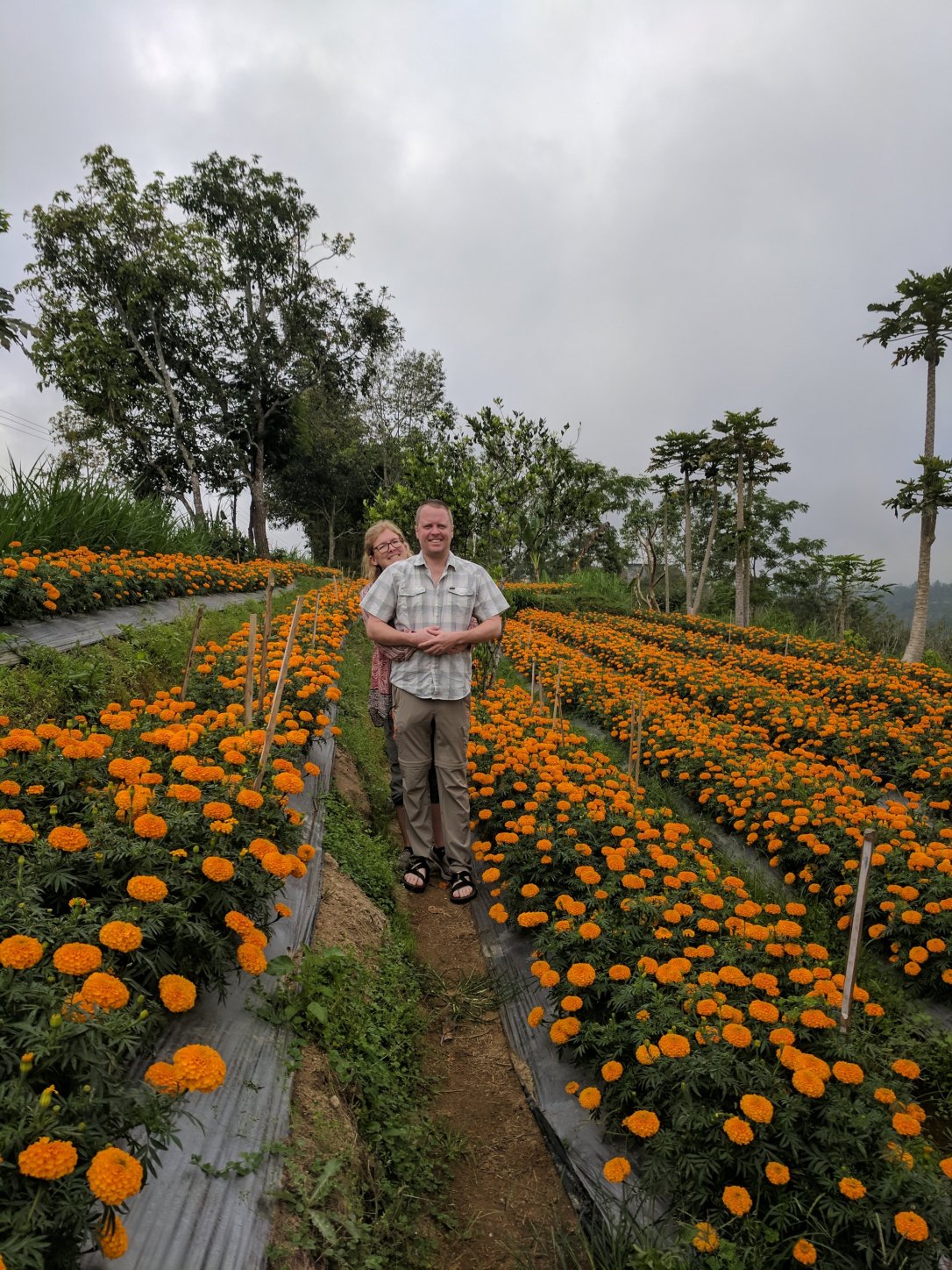 As we continued, as luck (?) would have it, we stumbled upon cockfighting. Our guide had brought it up before, but I was sort of surprised when we ran into it and stopped as I wasn’t sure what the reaction would be to foreigners being there. Nobody cared. We were the only foreigners and I was the only woman. A few of the men asked me to take their pictures, even. They called out, “Pick tsur! Pick tsur!” 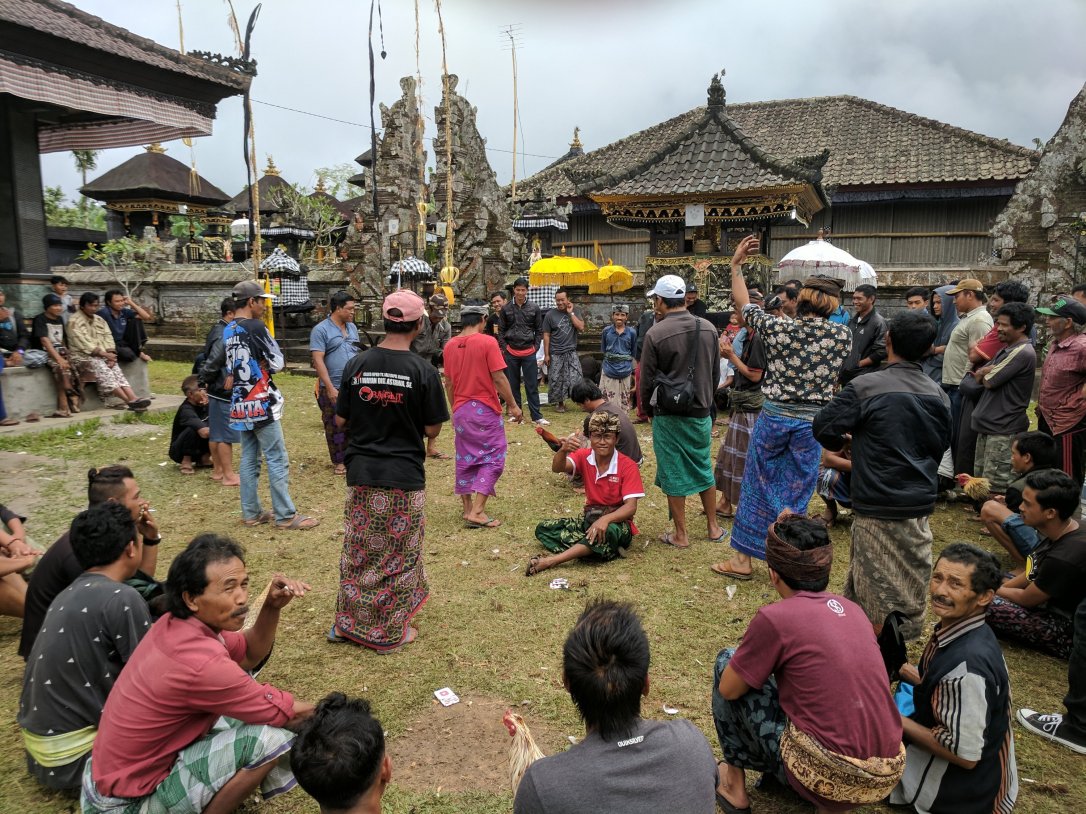 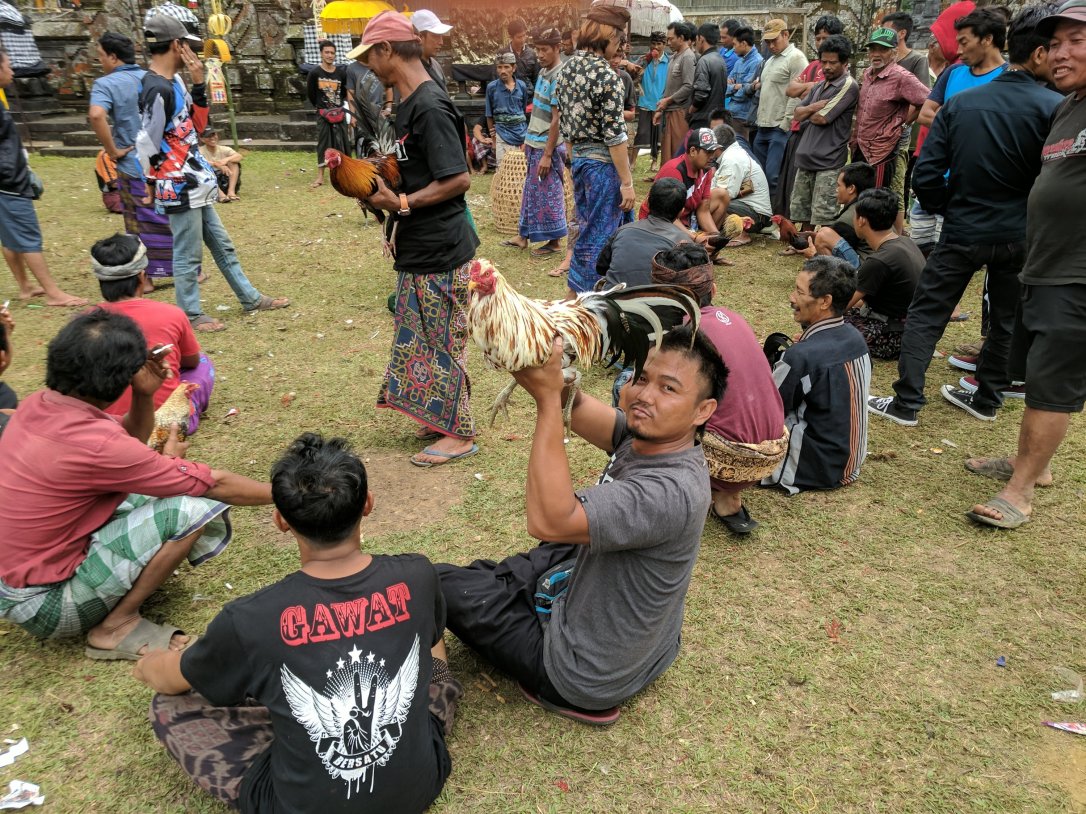 It was sort of funny because right before the fight one man kept nudging another and it definitely related to me. It’s very rude to point with fingers here, so he kept trying to (unsuccessfully) point with his head. The other guy just shrugged at him. I saw you though, sir!

Anyway, I was a little uncomfortable at the beginning, but I got over that pretty quickly. I don’t know what I was nervous about; I’ve seen wild dogs right after they killed, then ate, an impala. Before the fight starts they tie the blades on to the rooster’s foot.

The roosters know what’s up and they don’t move. Then the man in charge starts the betting, which was interesting and got pretty lively. You can see a video of the whole thing here, but keep in mind it includes the cockfight itself. Once it got started it was over pretty quickly. There wasn’t a lot of gore, so even the most squeamish should be fine watching the whole video. The winner got to have the loser’s rooster for dinner, plus a cash prize. Yes, it’s still illegal in Bali. When I asked what would happen if the police came around, our guide shrugged and said, “They’d give him money to forget.”

We hopped back into the car and we were were on our way to Pura Ulun Danu Bratan, the Water Temple on Lake Bratan. Very beautiful.

Since the Botanical Gardens were nearby, we decided to have a look. They were more like a park than a flower garden, but still quite peaceful with people having picnics and children playing. Also, this mammoth tree/root:

And then it was time to see the big daddy of rice terraces in Bali. It did not disappoint! We did the ‘flat’ 30 minute walk after eating lunch at a restaurant there (delicious food) and the views were outstanding. Also, I think the Indonesian version of flat, just means a flat road…because of course there were hills. 22 flights of stairs! It was totally worth it, though. I could share a gazillion pics of these, but I’ll try to limit myself. 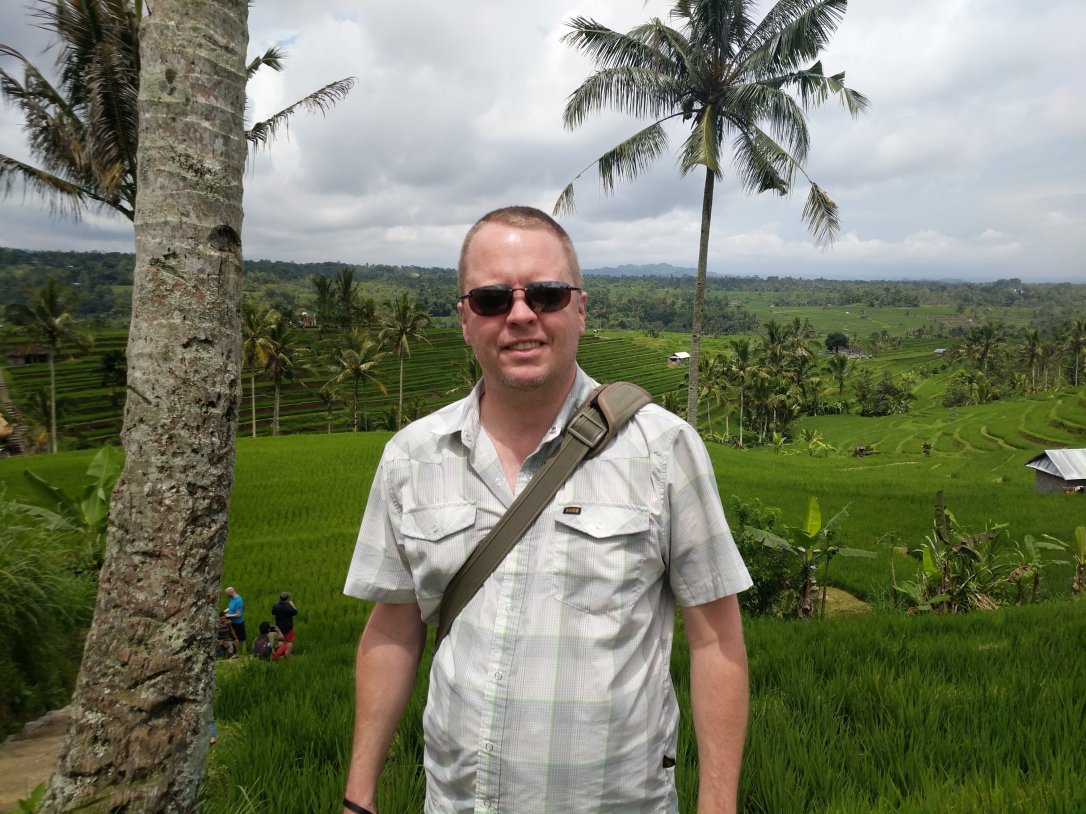 It was getting to be a long day, so we skipped the butterfly park and went to try some Luwak coffee. If you don’t know what that is, it’s this wild cat-like animal that eats coffee beans and they, um, eventually make the coffee from it. It’s supposed to taste fantastic. I felt a bit sorry for the little fellas. They apparently work a week and get three off.

Here is a dumb interview Sal was kind enough to partake in as he taste tested the poo coffee. His overall impression was it was OK, but nothing to write home about.