We rented bikes and rode to the chateau that was said to have inspired the look of Disney’s Sleeping Beauty castle. It seemed the perfect place to put this first stone. We knew right away that putting the stone indoors would be wrong, plus we didn’t want to take a chance of someone finding it and throwing it away.

We wandered the grounds until we found a spot that was hidden away by a brick wall/doorway. The spot overlook the water and a quaint bridge, and was in the front of the castle. Sylvia definitely would have approved. 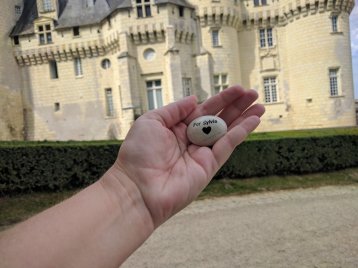 To date, stone 2 is the only one I asked for permission to place. We were on a diving/snorkeling trip and I wanted to make sure it was OK to leave a stone in the ocean and it wouldn’t be considered littering or whatnot. It was interesting trying to explain to my guide what I wanted to do, as English wasn’t his first language (although he spoke it quite well). He eventually understood, and on one snorkel when I said ‘how about next to that purple coral – she loved the color purple’ he explained that the coral would move away. He then suggested putting it in an anemone where fish already lived so it could be in an actual home. He said it wouldn’t hurt the anemone as it was just a rock. I loved the idea, so he dove under and placed it inside. Watching this video puts a smile on my face as I remember those clown fish that live there, too, and now they have a special rock representing a special lady. I think it would be a miracle if human eyes ever saw that one again.

Singapore is the greenest big city I’ve ever been to. It’s spectacularly clean, with gorgeous parks, gardens, and green spaces. We went to the orchid garden and it blew our minds with the sheer volume and variety. I knew this was where the stone belonged. The problem was we didn’t want anyone to mess around with the stone, so we needed to hide it.  It was quite a busy area and because there were so many different turns and twists inside the garden, I doubt I could find this location again. I’m sure that the people who take care of the plants there could very well find this stone, but I’m hoping they leave it. A purple flower for Sylvia.

We were on a private island south of Phuket. No cars, no traffic, private pool, breathtaking views. Bliss. Such a peaceful spot deserved a stone, so we put it with the other stones around the pool, with the amazing water view. A beautiful place to rest. 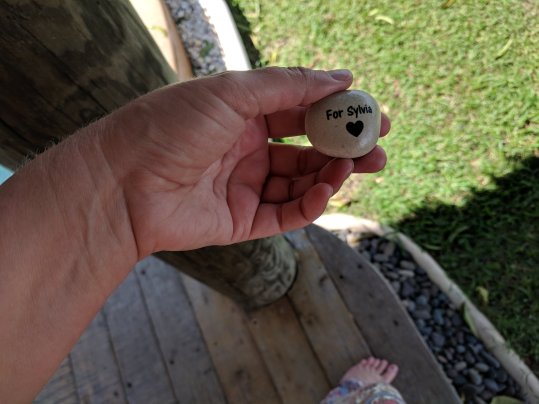 Vietnam was somewhere I didn’t expect to like, but I fell in love with it. The people are kind and welcoming and the food is amazing (and I didn’t have Vietnamese food before the trip, so that was pretty lucky!). There were so many different spots that I could have left a stone, but the rice terraces with the beautiful views and amazing tiny village below was the spot of choice.