I woke up in middle of the night unsure where I was. My stomach not-so-gently reminded me I’m a woman of a certain age who should icks-nay on eating wasabi on an empty stomach.

Today we were going to check out a garden after we cancelled our tea. We went to the front desk to have them cancel, and they told us no problem. We then made our way to the bus stop, which involved walking through the mall connected to the hotel, then up an escalator that brought you to the bus stop. Imagine our surprise when two of the ladies from reception were at the top of the escalator, flagging us down! They must have run and taken some shortcut to beat us. It was sort of funny, until they told us that we could not cancel the tea because they had booked us in the wrong one. Oops. Oh well. Good thing we liked the first tea ceremony!

The bus, which I had read was very easy, was very confusing here. At least for me. I thought that it was worse than the buses in Kyoto, which is really saying something. Right then and there I decided there was no way on God’s green earth I would be taking any public bus in Tokyo.

We got off at Kenroku-en gardens, one of the most popular gardens in the country, and walked a bit. It was extremely hot out. The gardens were really large and very popular. The reason we came to Kanazawa was to visit these gardens. While they were pretty, the crowds and heat took away some of the enjoyment for me. I also expected more flowers, but there weren’t hardly any. I think it’s more about the greenery and water. I still enjoyed it, but it really wasn’t what I expected. After the whole Japan trip I decided my favorite gardens were the small, quiet, intimate ones. Still, Kenroku-en garden was picturesque: 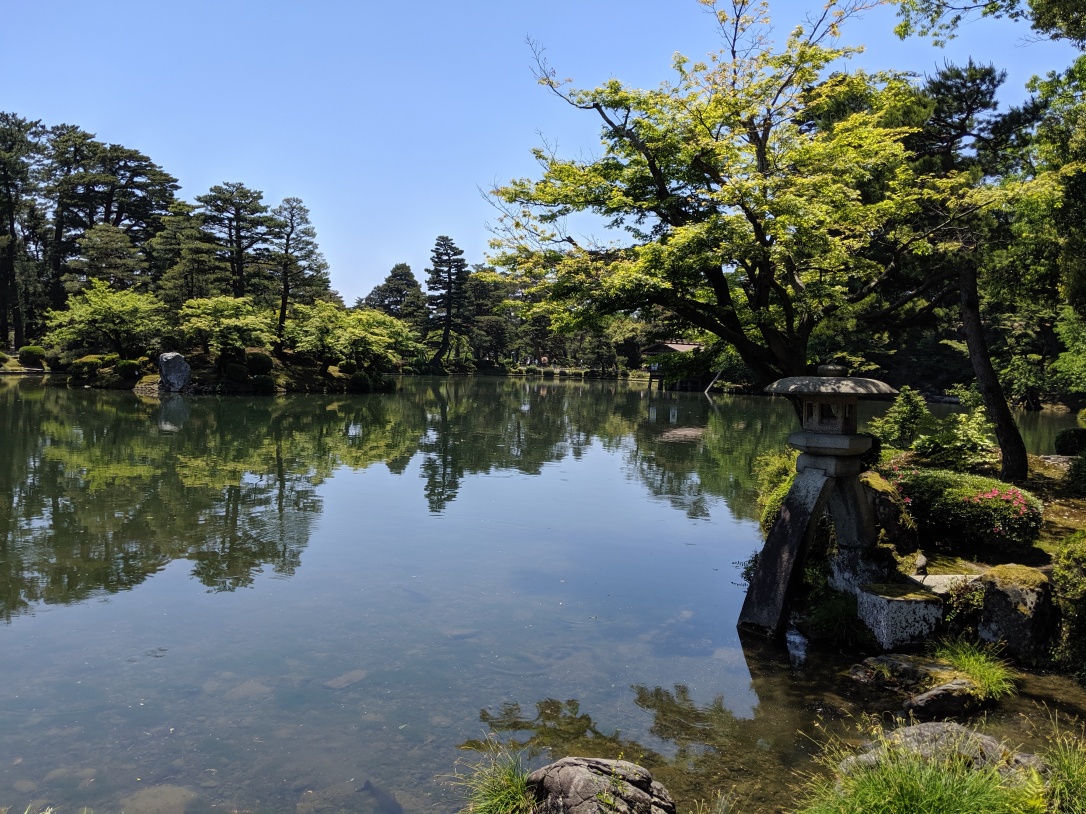 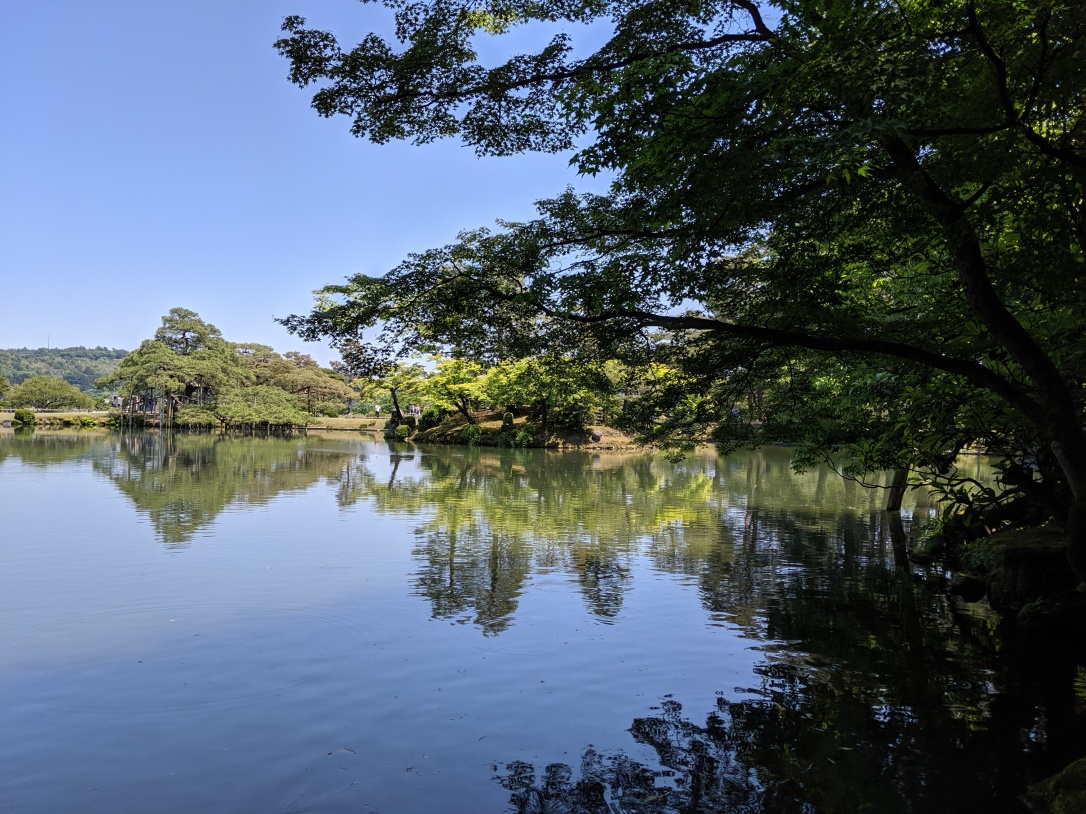 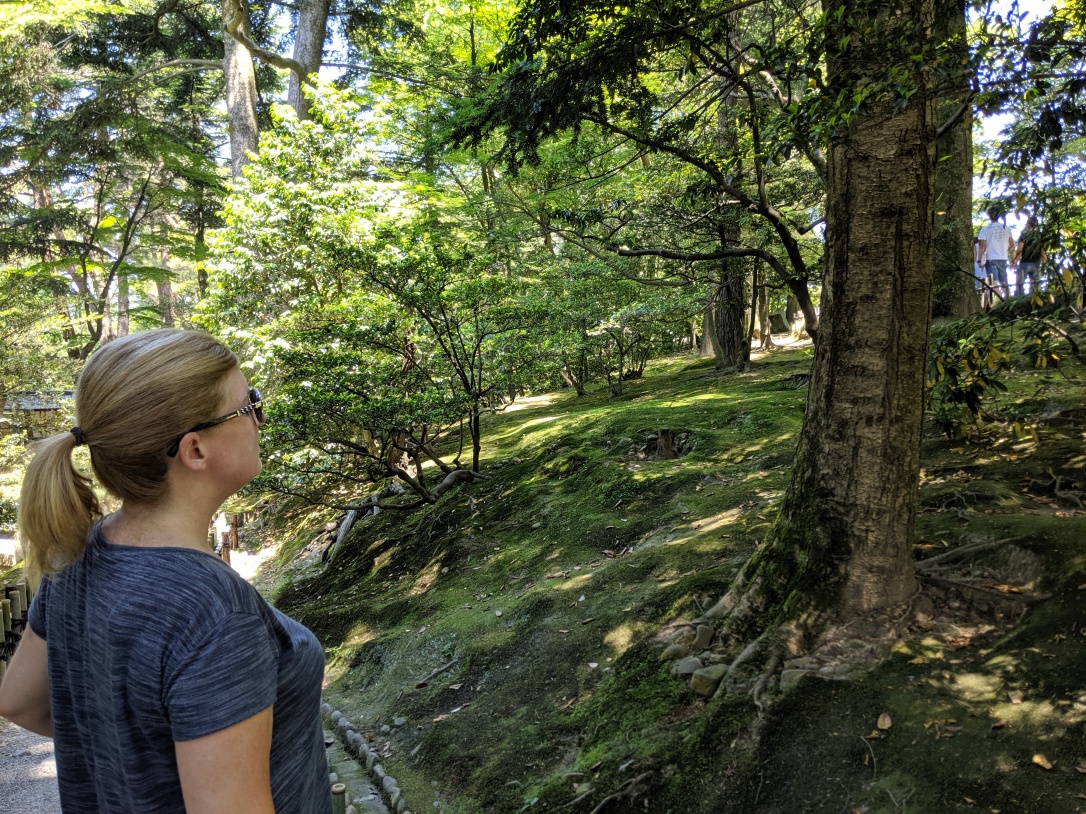 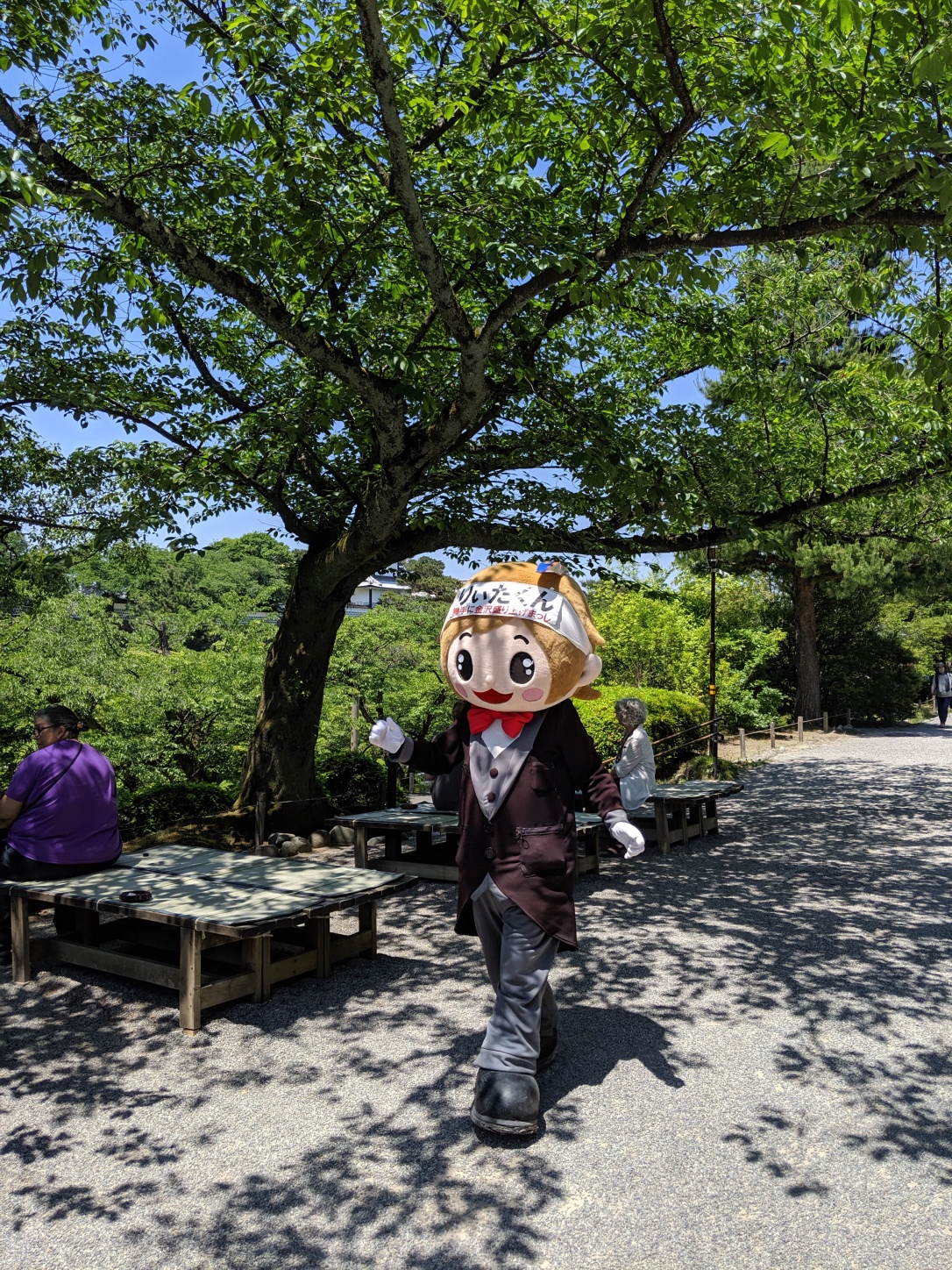 Pretty soon it was time to head to tea. The tea was at a samauri’s house near the gardens, but we had a little trouble finding it. We weren’t having good luck as far as directions. Once we found it we discovered it was a private ceremony and that’s why it couldn’t be cancelled the same day. Thank goodness there was a little bit of a breeze through the tea room, or it would have been miserable. As it was, I felt bad for the ladies dressed in the traditional clothing — it was beautiful, but had to be incredibly hot. We actually really enjoyed this ceremony and were able to take pictures and videos. We learned new things, and the women who ran it were very friendly and professional. 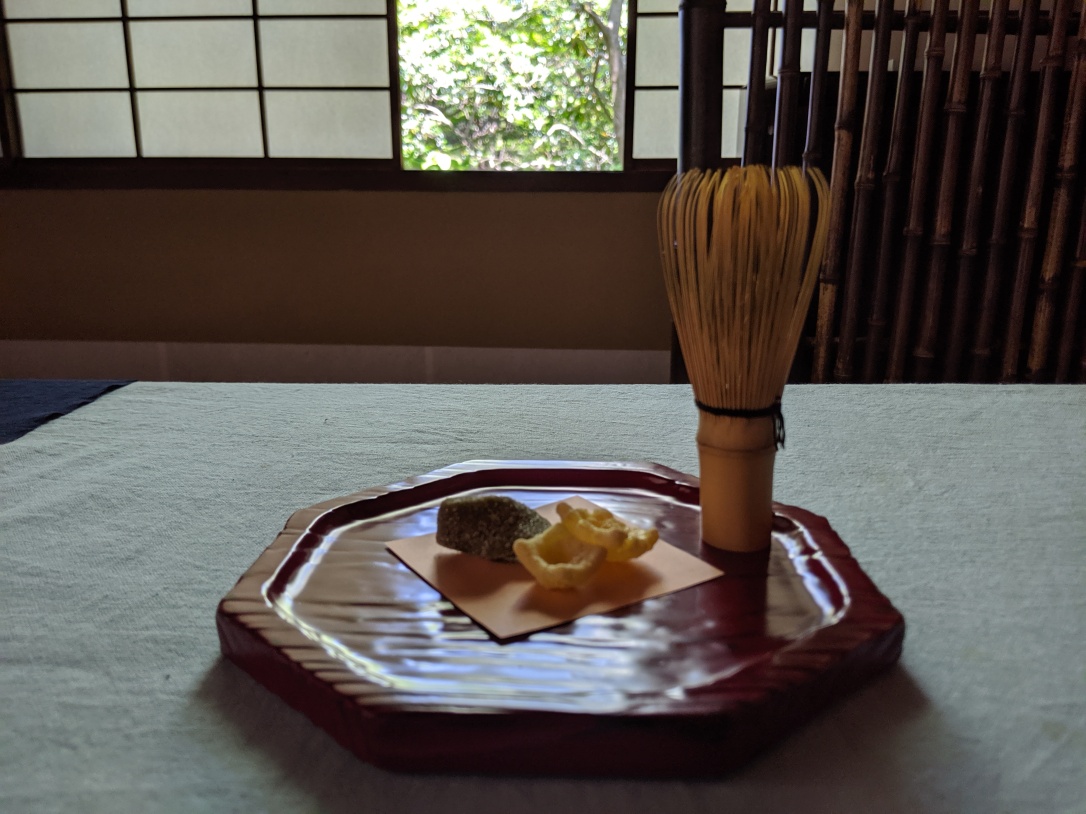 I decided this would be a good spot for Sylvia’s stone, so I did a quick ‘drop and run’ while Sal videoed me. There were two other small buildings on the property and one had business (salary?) men having some sort of small meeting. I was so nervous they would see us, so I dropped the stone in the water and high-tailed it out of there, while Sal took a leisurely video. Typical reactions for both of us :P.

I was so hot and tired of walking, so we decided to use our bus pass (less walking) to get to a museum. We missed two buses that we could have caught. Of course. I told you they were confusing! By this time I was hot, limping, and hangry, so we decided to just get some lunch at a fast food curry place. It was actually quite tasty.

We saw some outdoor festival going on and checked it out. There was an A Capella group singing Bruno Mars. I love Bruno, so of course I had to check them out. They had pretty good voices!

We then walked to the samauri district. We toured a samauri house, which had a small upstairs room to have tea, with a view of the garden from above. My notes say that I finally figured out how to get up off the floor after sitting on the floor for tea. It’s sad that this day was after almost two weeks in Japan and it took me that long to figure out how to get up from the floor, but remember my knee was injured pretty much the whole time. That’s my story yadda yadda. To the six of you that are reading this… don’t hold this against me! We went downstairs and viewed the rooms and then sat outside to enjoy the garden. While this garden wasn’t as quiet as others we had visited this trip, it was still really lovely and interesting. 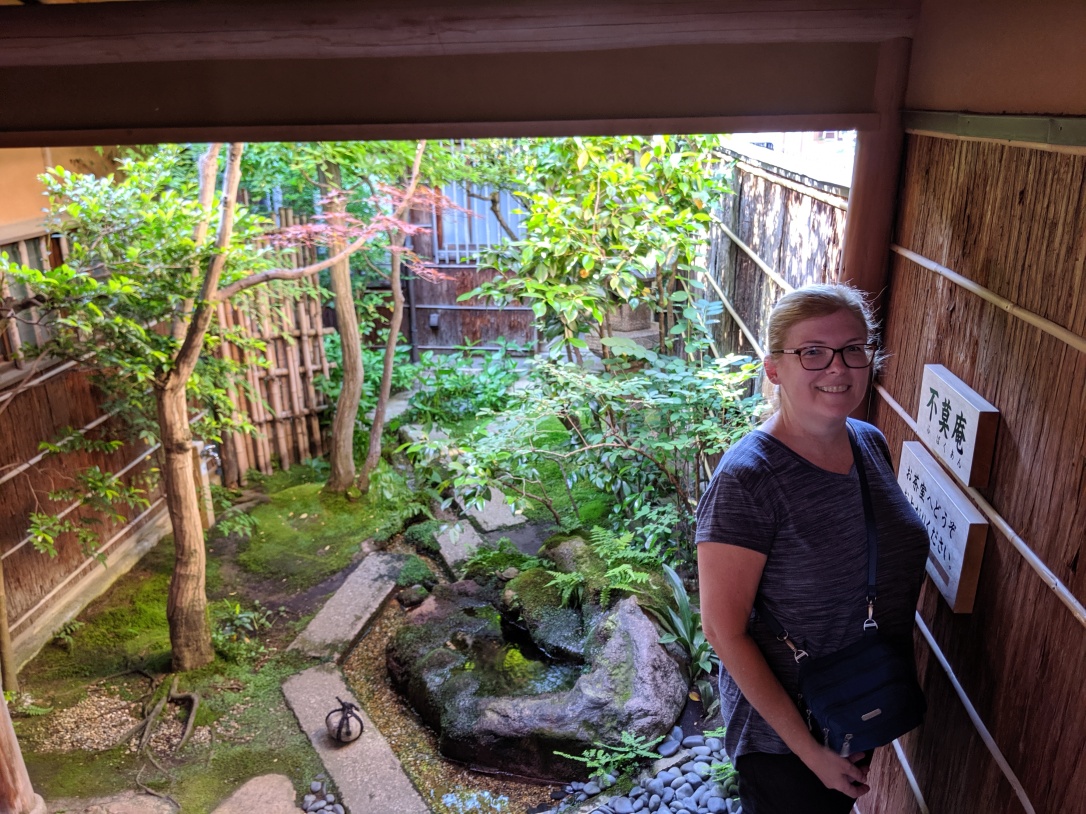 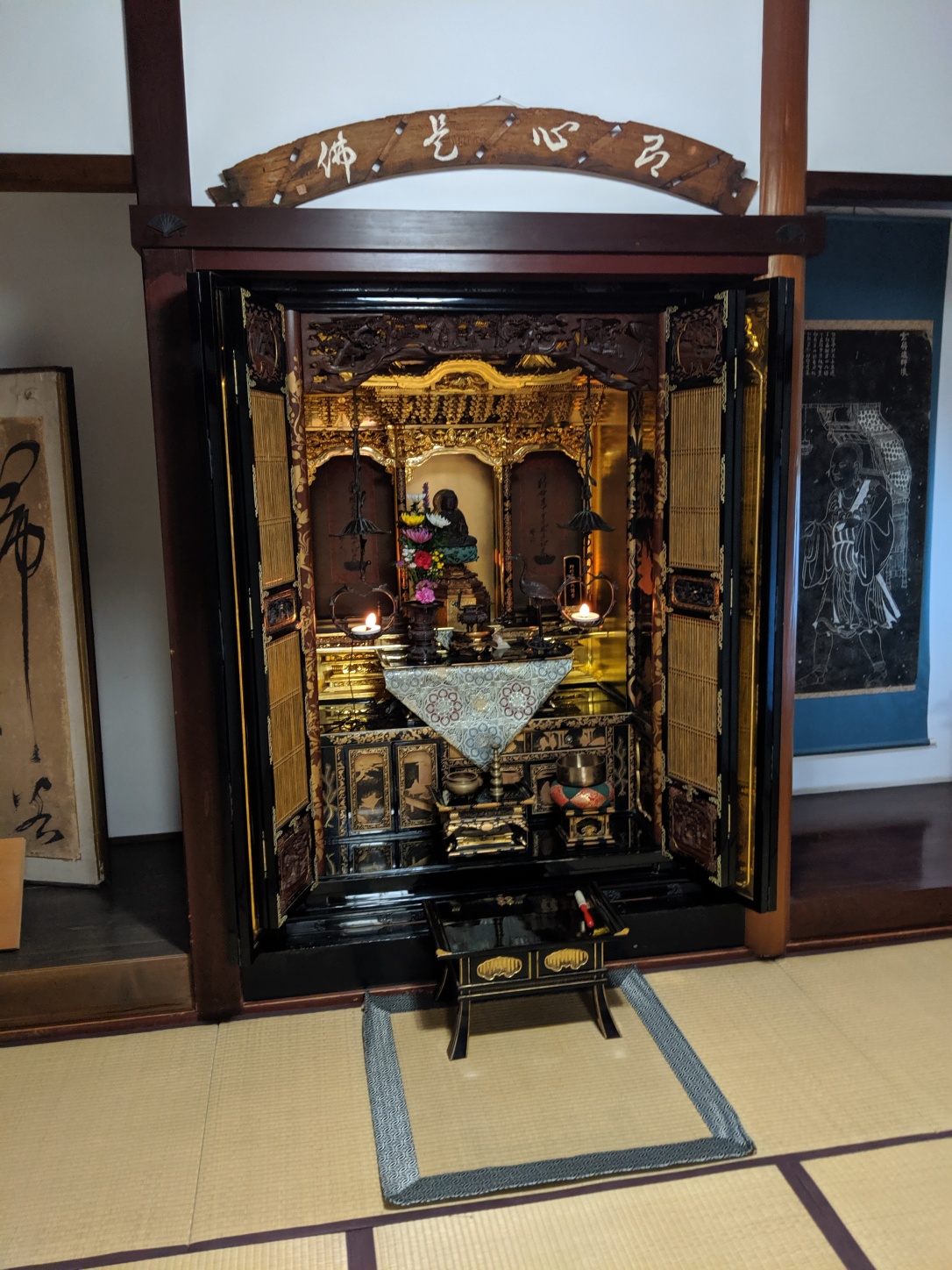 We walked to nearby shrine, where they happened to be making displays out of bamboo for a festival. We tried to figure out what the festival was, but this was one case of sign language just not filling in the blanks and none of the literature had any English on it. Ah well. There was a pretty little water garden area there with great light. I loved it when we would just happen upon beautiful and/or interesting things in Japan. It happened a number of times on our trip. 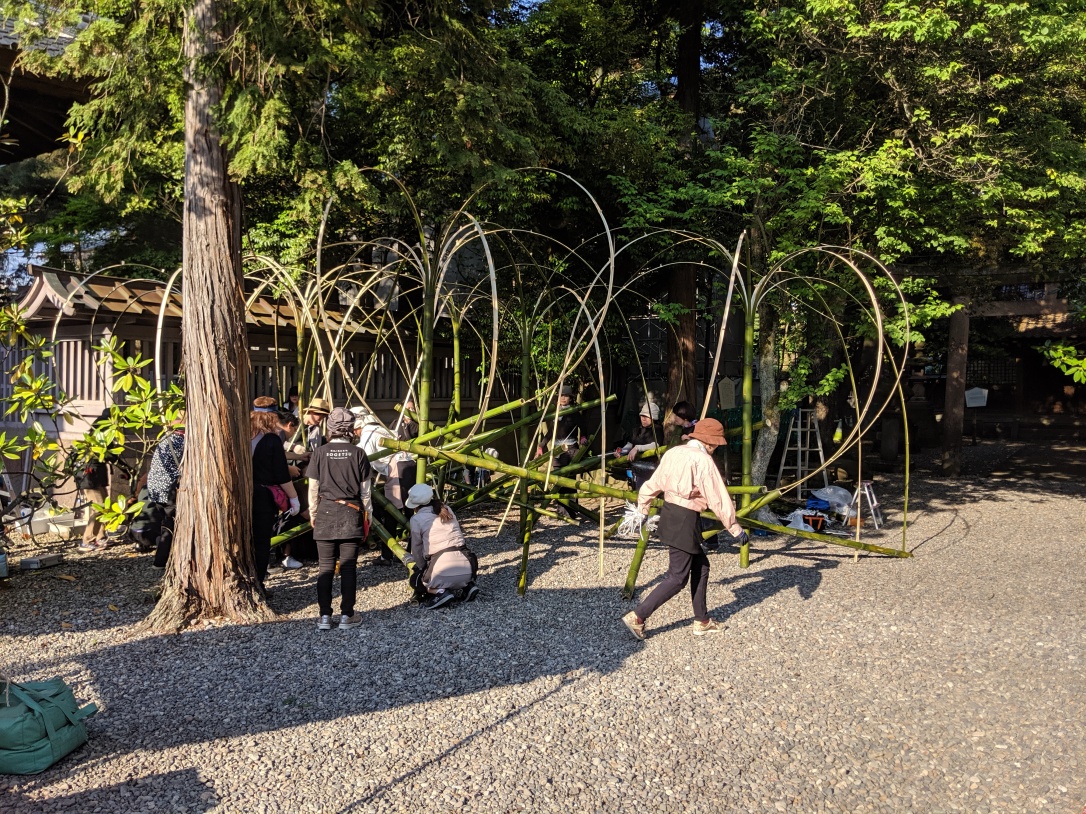 We then got the bus to the hotel, but of course we got off on the wrong stop. Good grief. Was it us, or the buses? At least we recognized where we were when we got off. We made it back to the hotel and they had left sweets and a note in our room as an apology for the tea ceremony mistake, so that was our dinner and we had some sake.