I thought I’d already posted this, but it was in my drafts. Oops. Enjoy!

It was about a four hour drive to get from Kakadu National Park to our hotel in Katherine. Sal is the driver on our team (he got stuck with a really crappy driving partner as I don’t drive.). The people at the hotel in Katherine had recommended stopping by Edith Falls on the way, so that’s what we decided to do.

Edith Falls is a series of cascading waterfalls and pools on the Edith River in the Nitmiluk National Park, located approximately 60 kilometres north of Katherine, in the Northern Territory of Australia.

After we’d parked, we tried to decide which pool to swim in. Of course, my preference was the lower one because that meant no hiking. Then I saw this sign:

So the upper pool it was!

There was actually more rock scrambling after the initial view. Oi. I didn’t take a picture, but just look around the pic below and you get the idea. It was very difficult for me, and to top it all off it was around noon time or something ridiculous; we always seemed to hike at the hottest part of the day because we missed that common sense gene, I guess. Anyway, we were so extremely hot. Once we got near the water I stripped to my bathing suit, put my $10 water shoes on (great purchase!) and got in the water…

Here’s a video of me in the upper pool. The video really shows the rocks we had to scramble at the end, too, so take a few seconds to watch it and appreciate that this old lady did it! There were several people relaxing there; the water was super clear (and did I mention cold?). I thought I was getting a little cold when a woman said she saw a snake in the water. Then I knew I was cold and it was time to get out and start the hike back down to the parking lot.

I had never, ever done anything like that before. It was really hard for me, but I was very proud that I did it! I never could have done it without Sal, who gave me a steadying hand whenever I needed one. Thanks, Sal <3. We got something cool to drink, then got back in the car to get to Katherine and to our hotel. We needed to get cleaned up before we headed to our sunset cruise at the Katherine Gorges.

Our hotel was gated in, which made me wonder about safety. It was all good, though. I would learn the next day that they had two HUGE dogs running around that were the size of small ponies. I only felt nervous when they were around and drooling on me.

We checked in and got into our room. After sorting through luggage for a change of clothes, I walked to the bathroom to take a shower and did not see that the floor was raised about an inch and this happened:

Ooooh, the pain! Sal said he didn’t see anything. Sometimes I seriously am concerned about Sal’s eyesight. I took a pic and saw all the skin. One silver lining about having numbness in my feet is that I don’t think this hurt as bad as it could have if I didn’t have it. Haha! Sal got me some ice and I iced it for an hour, and then it was time to go to the sunset cruise.

We got on a smaller boat to cruise along the first gorge. It was incredibly pretty: 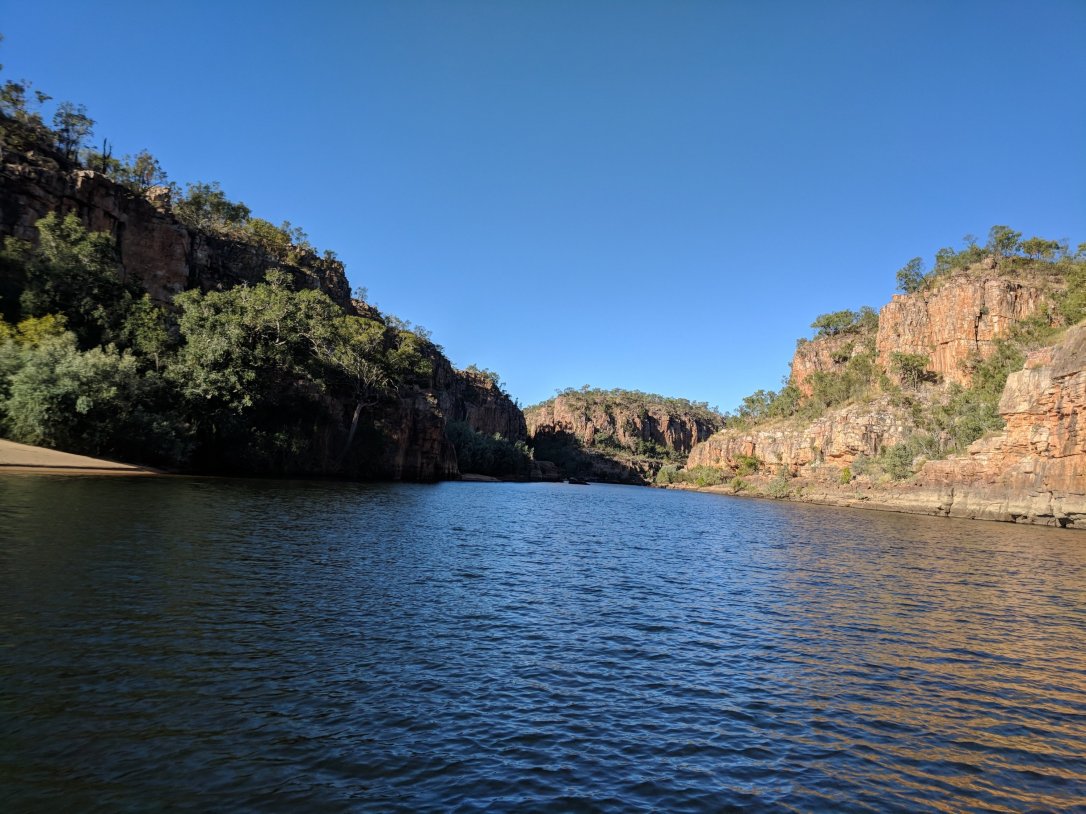 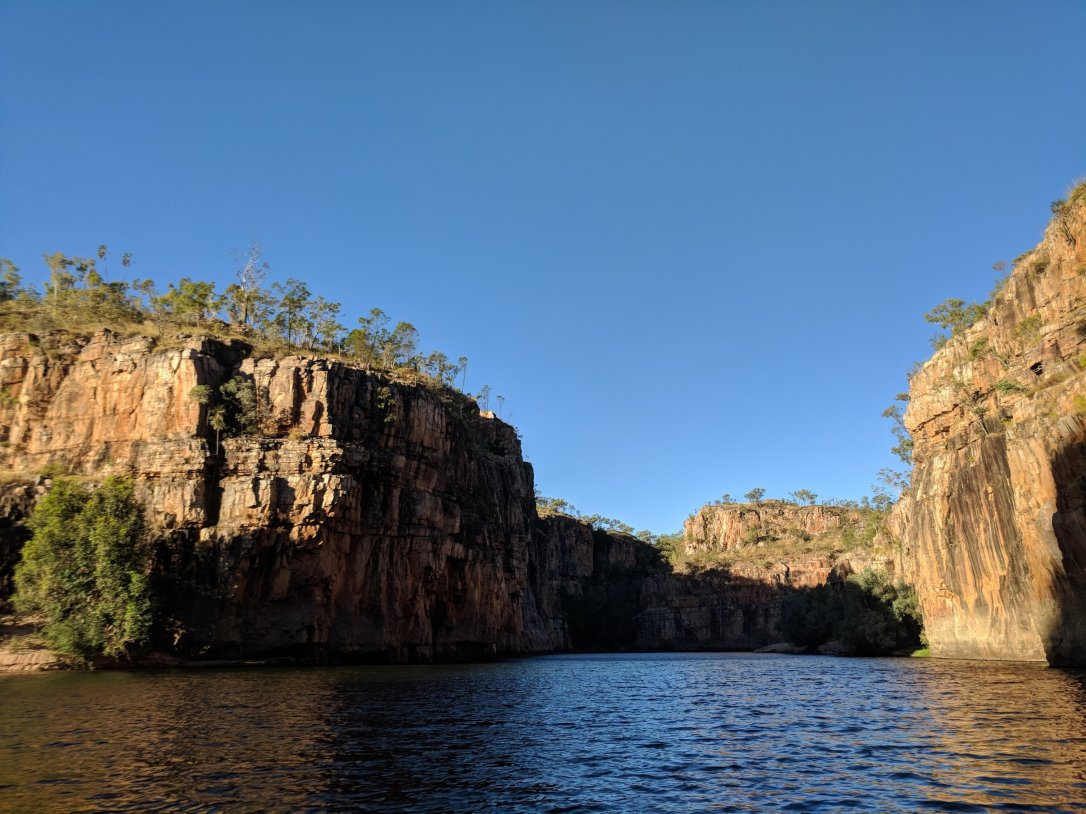 And here is a video of the gorge. We had to do a short walk to get between the gorges. 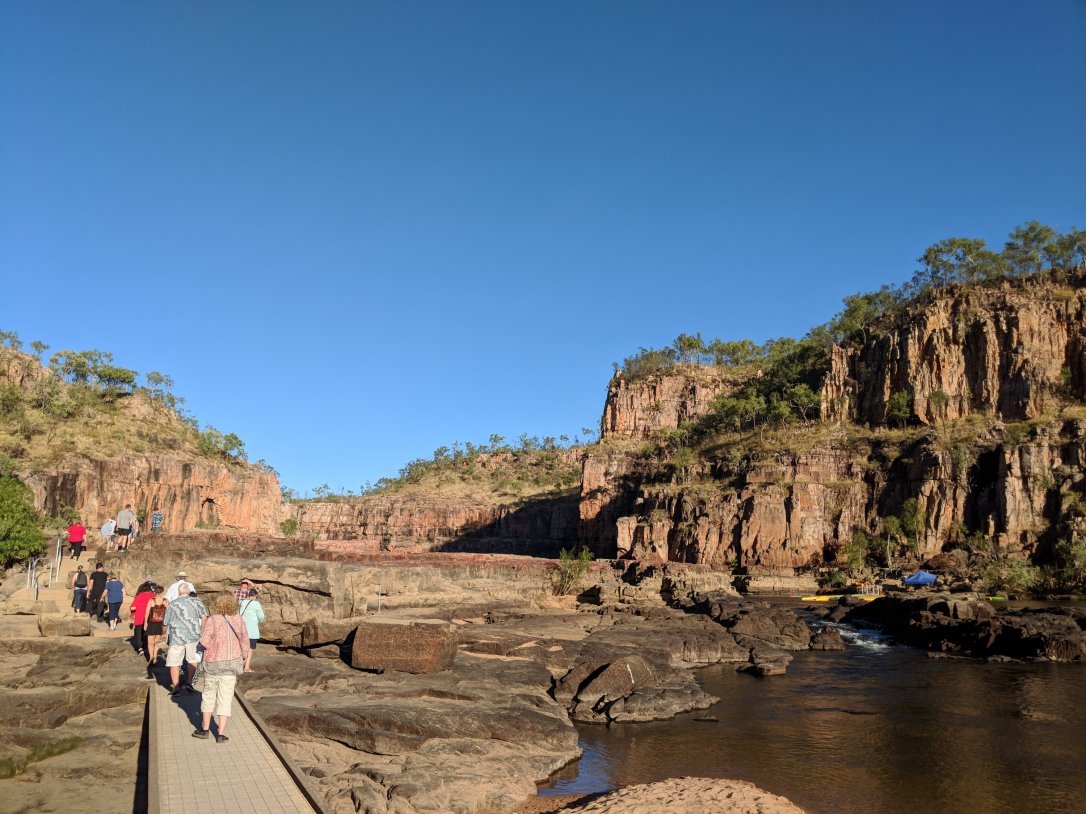 Then we got on another small boat to see the next gorge. Here is another video. We made our way back to where we had the boat transfer and walked back to the first boat. The colors were gorge-us. Yes, we made that dumb joke the whole boat trip. Come on, now.

Our dinner was pretty tasty. Unfortunately we were seated at a table with a couple from Melbourne and the husband was wearing a baseball hat of a team that shall remain nameless. I tried to tell him that they were considered the bad guys in the US, but he wasn’t falling for it. Now remember, up until this point we had not seen any wallaby or kangaroos.

We ate some, though! Shaaame.

After a very enjoyable day (minus the injury, that is), we made our way back to the boat launch and drove back to the hotel. Katherine’s Gorge is highly recommended if you’re ever in the Northern Territory of Australia. It’s very calm and we only saw a couple of crocs. Ha.