I had been up about 30+ hours straight with no sleep. You would have thought I would have slept like a log when we finally went to bed. You would have been wrong. I slept for 5 hours, and that wasn’t even straight. Oh jet lag. You’re cruel.

Something that I forgot to mention about the first night is when we went to get the egg waffles we got lost in the mall and couldn’t figure out how to exit and get outside. It will surprise absolutely nobody that knows me that I got lost, but hey Sal did, too! It was a comedy of errors. It should have been obvious. We followed exit signs, but they didn’t look like ‘real’ exits, but more like emergency exits and we were afraid of setting off some kind of alarm. We even asked a nice lady who was cleaning the floors, but she didn’t speak English. She pointed to one of the fake looking exit signs, so who knows? We eventually figured it out, but let’s just say it was a humbling experience because we got lost a few times in that mall.

We were getting ready to leave the hotel building and we noticed a man laying on the ground across the street. It was very early in the morning and weird to see. We just sort of stood there, watching, not knowing what was going on. Pretty soon police showed up and then an ambulance. Yikes! We thought, “A murder on the first day?! What did we get ourselves into??”.  OK, I’m the only one who thought that. Sal just thought it was a super-drunk guy. Sal was right. What else is new? We shrugged our shoulders and thought, “Hong Kong!” and made our way towards breakfast.

If you’ve never been to Asia before, one thing that may or may not surprise you is that a lot of Asian countries really aren’t into breakfasts, or at least the sort of breakfasts that Westerners usually have. Another thing that might surprise you is how many 7-11’s there are. These are better than the ones back home in that the food is much more fresh and there is more of it. It’s very common for people to pick up a cheap meal at 7-11, and since there was one right across the street from the hotel, that’s what we did.  The price for breakfast at our hotel would have been eight times as much, and since I don’t normally eat much in the morning at home, it seemed like a no-brainer. You can use the same card at convenience stores like 7-11 that you use for the subway/bus/train/ferry. It’s, well, convenient. You can top your card up at the subway station or the 7-11 as well. Think of it sort of like a debit card. Sort of. I think it’s referred to as a travel card.

We didn’t know what we wanted to do the first day because a) we weren’t sure how we were going to feel and b) it was Buddha’s birthday. Being as we were in a crazy busy city like Hong Kong, saying something like ‘we wanted to avoid the crowds’ sounds ridiculous. But it’s the truth. We didn’t want to be stuck in even more craziness than normal. We opted to try to avoid temples or places where the crowds might be worse because of the holiday. In the end we decided to keep it simple and to do some walking and some exploring and just see what we could see.

We took the Star Ferry, which is a ferry that takes you from the Kowloon side of Hong Kong to Hong Kong Island. It’s really cheap (it was less than .30). It’s not a long ride, but it’s very enjoyable and you get great views. Highly recommend. It’s a better way to see the city than from underground!

We walked to a park that we thought was going to have some sort of food festival. It didn’t. But the park was pretty. 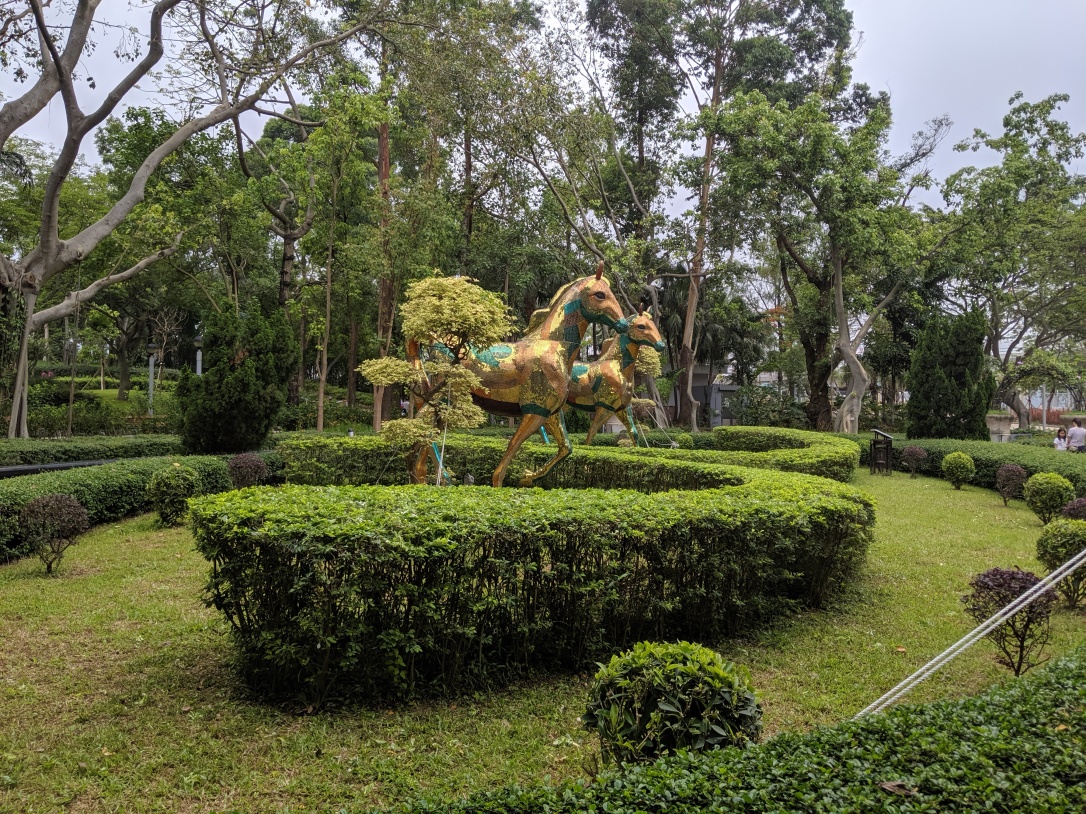 We sat on a bench and truly soaked in Hong Kong for the first time. There were joggers, and quite a few people in wheelchairs being pushed along. There were a few sports fields, a jogging route, a basketball court, a big lawn, a garden, a pond, etc.. You get the idea. It was like Central Park but on a much much smaller scale… and a lot hotter.

Oh yeah, I forgot to mention the sweltering humidity. The last time I’d felt to this staggering degree was in Singapore. I wasn’t expecting it to be that bad before the trip, but I was wrong again. I don’t know if it was because there are just so many tall buildings it makes it seem even more hot, or because it’s both hot and humid. Whatever it is, it’s pretty serious and you need to make sure you have water or something to drink at all times.

As I said, we sat on our bench, drinking our water, and watching people go by. We got a fair amount of looks and smiles. We even had parents trying to get their kids to say ‘hi’ to us and wave. This happened more than once, and was really cute. We learned early on that the Hong Kongers were very friendly!

Dim Sum was the only thing on the agenda for that afternoon, and we were close to a popular dim sum place with a high rating: Tim Ho Wan. We got there about 10-15 minutes before it officially opened and there was already several groups there. It was a really big restaurant and by the time we left it was full to capacity with people waiting. They spoke some English and asked how many were in our party and gave us a menu and a number. A bonus was the menu had English! We waited until our number showed up on the screen and they called us. They seated two local ladies at the same time they seated us. The woman showing us to our table told me while we were walking to the table that we would have the table for one hour. I was sort of surprised, because the sign by the hostess stand said that the time limit on the tables was an hour and a half. I said OK, because dim sum doesn’t usually take that long anyway and we pretty much knew what we wanted. While we sat at our table, the two local ladies chatted a little bit with us and asked how long they told us we had the table. When I told them, the one woman said she thought that was what they told me and it actually is an hour and a half. “One hour is not enough!”. Girlfriend had our backs. It was sweet that she wanted to make sure we knew. 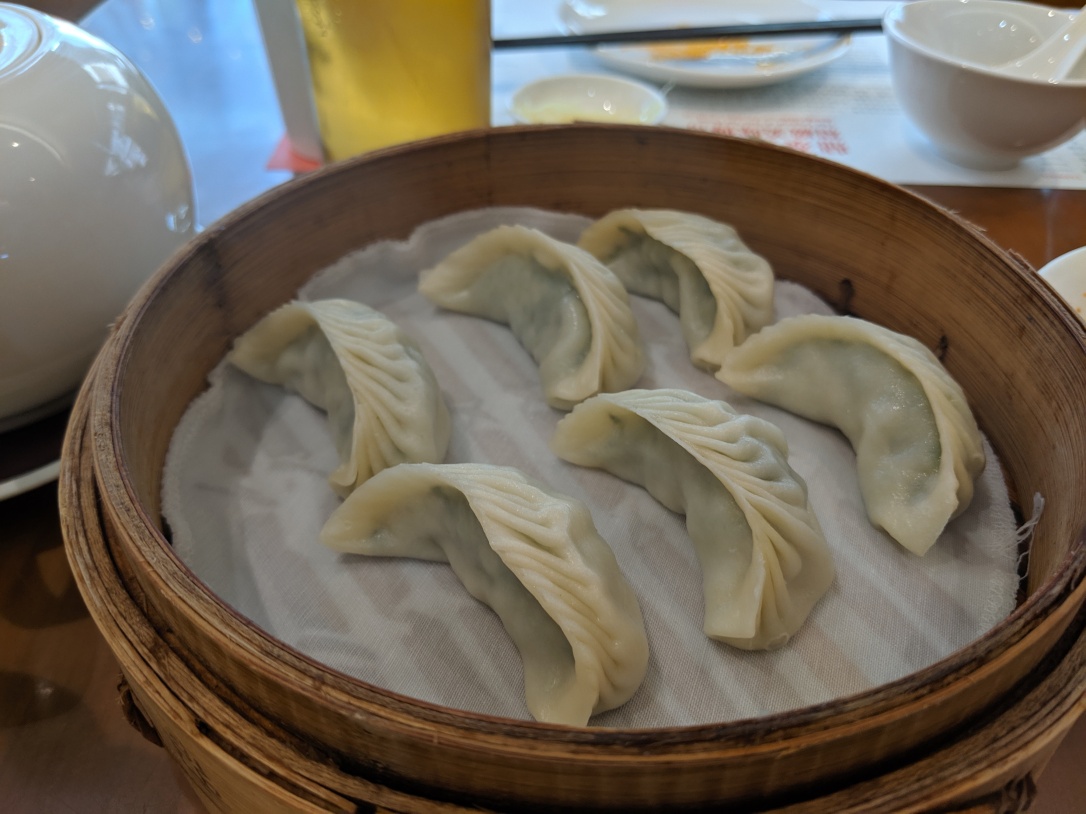 It was next level dim sum and probably the best I’d ever had. I’m hungry just remembering it. So much deliciousness.

We had full bellies, jet lag, and no energy thanks to the humidity. We decided to ride the Ding Ding trolley. It’s a double decker that goes up and down the main street on Hong Kong Island. I thought it would be a neat way to see some of the island, and it was cheap. We got a seat at the top and enjoyed the breeze. 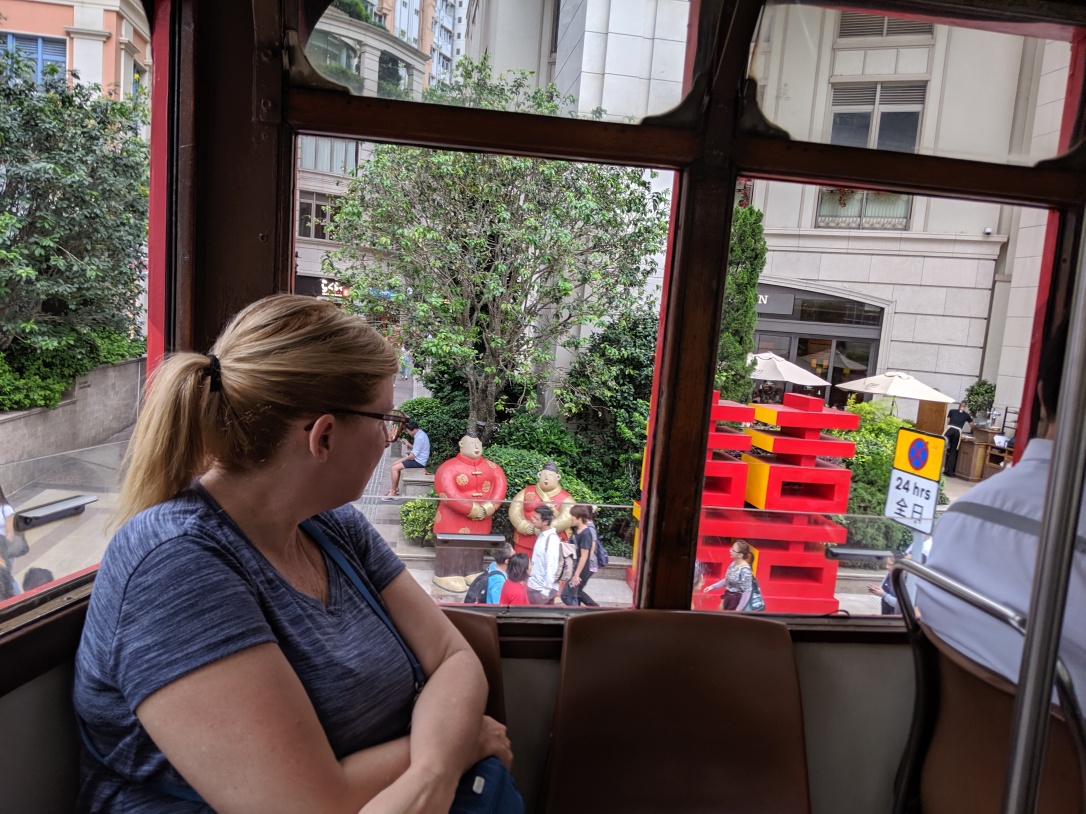 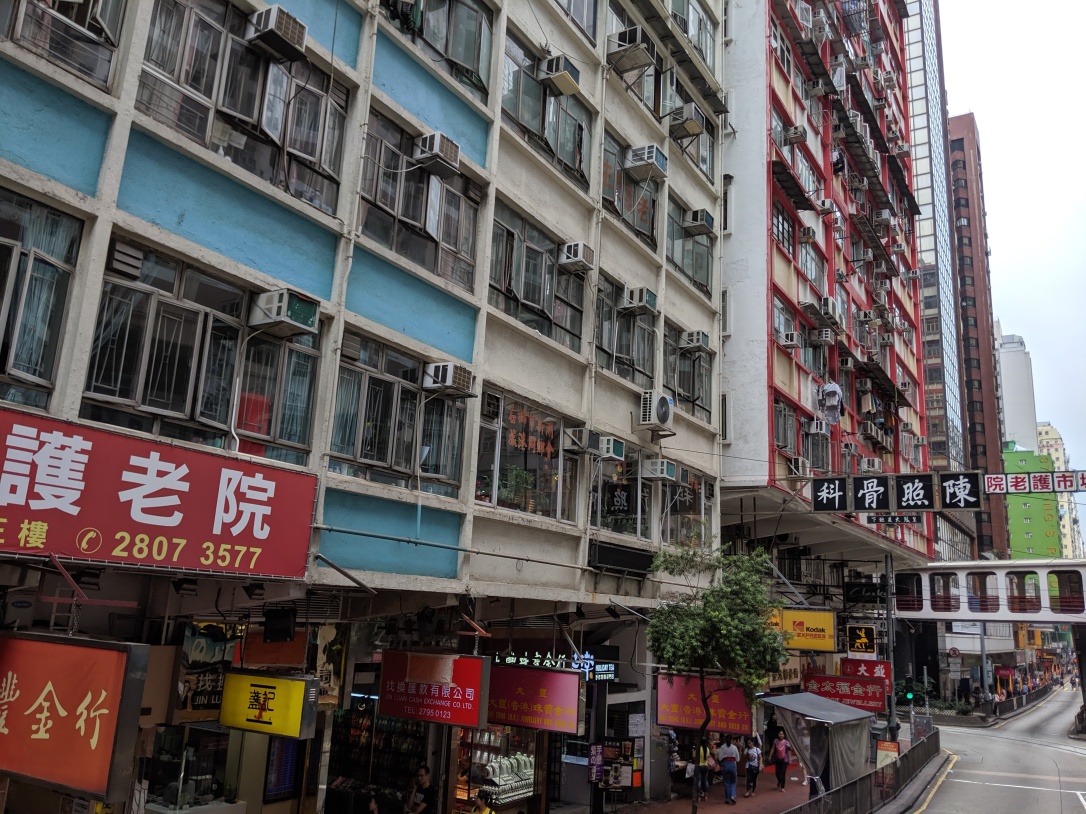 We decided to try to find this Catholic church that for some reason was on my map. You read that right. We were going to go check out a Catholic church in Hong Kong… the land of temples. Because jet lag. I’m just going to blame any dumb decisions on jet lag for the next seven days of this report. Deal with it!

To get to the church we walked through parts of Hong Kong Park, which we really enjoyed! The only bad thing was the park was situated on a hill, so it involved a lot of stairs. We’d discover stairs are pretty common in Hong Kong and there are lots of hills. You don’t see a whole lot of fatties in Hong Kong, and I think between the heat and the stairs you can eat whatever you want and you’ll probably maintain a reasonable weight. So there’s the silver lining.

Anyway, the park was very nice. There were a few pathways, an aviary, I saw a sign for a zoo, and there was also a free botanical space where I discovered my favorite newly discovered flower.

And there was a really neat fountain, with a really crazy lady posing. 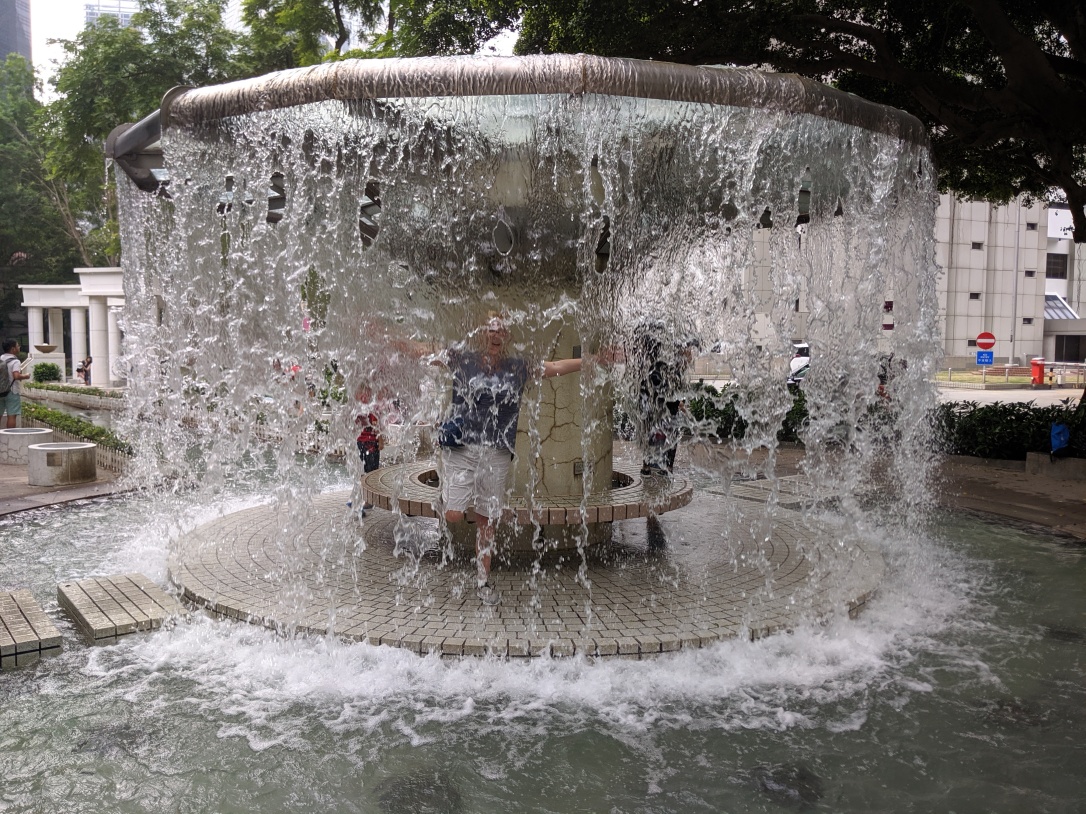 There are a lot of one ways and several streets where you can’t cross on corners in Hong Kong. This can result in extra steps and/or blocks. Ugh. We eventually got to the church and it did not look like anything special. At all. So we skipped it and made our way back towards the water to the Star Ferry. All that for nothing. But it really wasn’t for nothing, because that park was very nice – I’d definitely go back and explore more if I ever returned to Hong Kong.

One thing I didn’t mention is that even though Hong Kong is very crowded and hot, it didn’t seem that dirty. I really appreciated that. We’ve been many places, including back home, that had a lot less people and a lot more filth. We did notice one woman that was either homeless or just very drunk that had soiled herself (ick!) when we walked back towards the water to head back to Kowloon on the Ferry.

After crossing on the Ferry we decided to take the subway for the first time back to the hotel.

When we got lost in the mall the night before we saw something really cool – a little pop-up Guinness Bar where you could actually get photos printed on the foam of the beer! 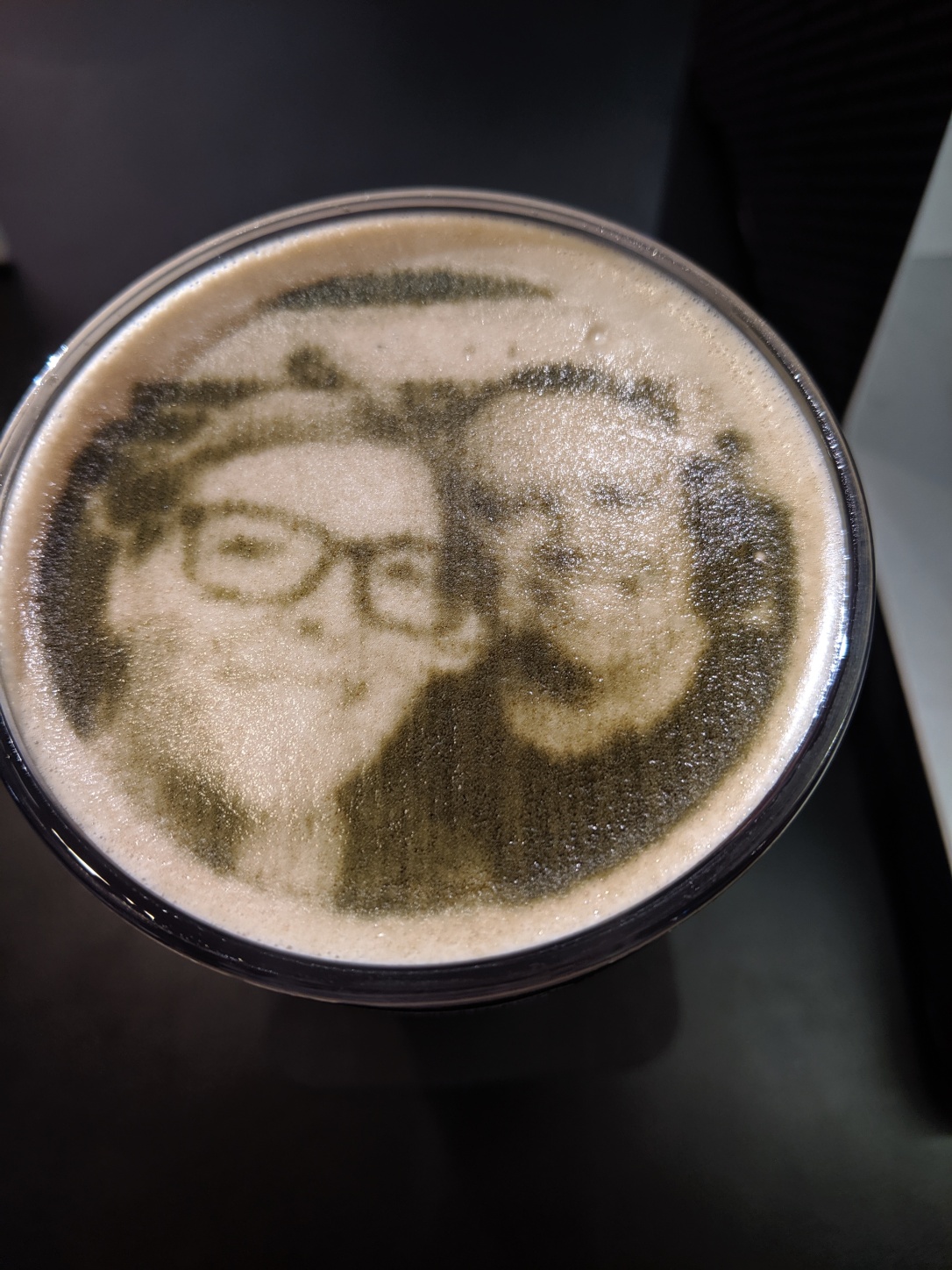 It was pretty fun seeing what other people had printed on their foam. It was a neat experience I hadn’t seen before. We finished our beer and got a little snack before bed. I discovered my favorite flavor: green tea & chocolate chip! 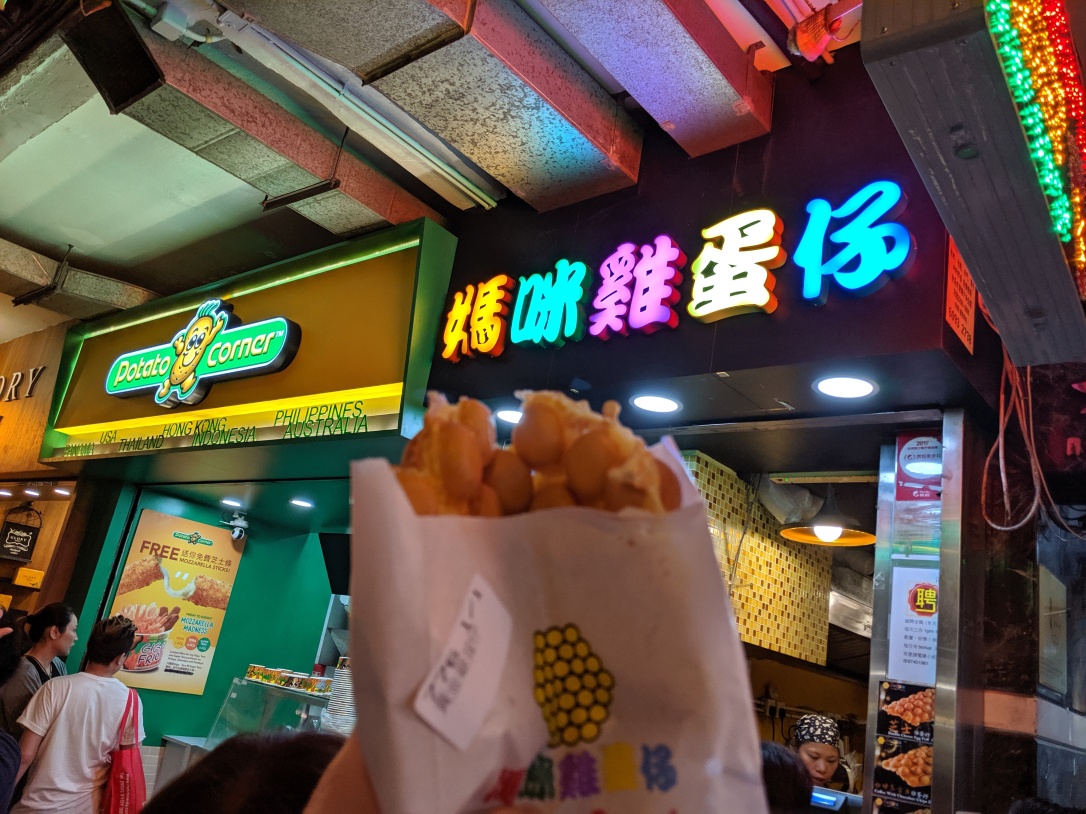 We went to sleep as soon as our heads hit the pillow this time!