Any way you slice it, it’s hard to follow up a day with elephants. Chiang Mai did its best, though, with the Loy Krathong/Yi Peng festival. I’m skipping ahead again, though.

We slept in. The day before had been wonderful, but it ended with women who gave us the worst foot massages we’d ever had. So painful, for me. My foot hurt for a few days afterwards and I had bruises. Sometimes you really do get what you pay for and we slept in to give our feet a break. We were quite lazy, and we didn’t really get going for a while. I may have been lazier than Sal, but see above where I said she bruised me. It wasn’t a big deal because our only goal for the day was to find a lantern to light that night. Two years ago, on our first trip to Asia, we happened to be in Chiang Mai for the festival and it was amazing. We thought they did the lanterns every night of the festival (three days), but they didn’t and we missed out, but there was no way we were missing out this year.

We got some lunch, and then wandered a bit and ended up at a cafe where we sat by the road while enjoying fruit beverages (shake for me, yoghurt for Sal) and reading our Kindles. While we were reading this man came up to us, smoking, and asking us how we liked the shakes. I said they were good, and he continued to stand there, smoking. During this trip I’ve definitely felt like Americans have a larger personal space bubble than a lot of other countries, and this man was definitely in my space. He just kept standing there and there was an awkward silence. He started talking more and we had a bit of a chat. He was from Holland and he had a lot to say. Apparently he owned the restaurant/cafe; I just thought he was some drunk guy. Hahaha. During our conversation he let us know how he had come up with the cure for ADHD, so maybe he was some drunk guy and he just happened to own a restaurant. It was an odd interaction, but years from now we’ll probably remember it. During the talk I said we needed to get a lantern and he said they would be on sale everywhere. He was right, of course. While we were sitting there reading, several people walked by with their lanterns.

After a bit we decided to walk to this touristy square they have with a lot of different food choices and where we could see the lanterns well the last time we were in Chiang Mai. Here is an example of the kind of music they have there. You don’t expect to see Thais in cowboy hats singing Hotel California and playing the banjo. A bit surreal. On the way there we saw lanterns for sale and secured ours. 100 baht. Did you hear that? That was the sound of us being ripped off in Thailand. Luckily it was only by a little over a dollar, but still. Sorta funny later when people were offering them cheaper. We just laughed. One guy asked Sal how much he paid and when he told him said he would have sold him one for 80 baht. Sal was like, “what did he expect me to do with that information?” Hahaha.

They were just starting to open the food stalls in the square, so Sal and I had a cocktail (they had a few cocktail carts) and talked about our game plan. While we were chatting, a woman came up to me and asked me if I had gotten my shirt in Thailand, because she really liked it. She was from New York. Small world. I’d gotten it in Chicago when I was with my cousins, so cousins if you are reading this that shirt got compliments – thanks for encouraging me to get it 😀

Soon we started seeing a few lanterns go up in the distance. The wind was blowing pretty good, and the lanterns were going a different direction than last time, so the view wasn’t as good. Some people were even lighting their lanterns in the square, which was dumb because there were a lot of overhead wires there. Once we saw the numbers had picked up and it was properly dark, we decided to walk to the bridge to try to send off our lantern.

Look at all these lanterns when you get to the bridge!

I was taking a video this video of all of the lanterns, because I wanted you all to see it. It’s truly spectacular. While I was taking this video this young French guy started lecturing me about how I should put my camera down and just watch, basically. Get off my lawn, Frenchie. I have people who need to see this.

The lantern release was as crazy as we remembered, and at first the police hadn’t blocked the bridge from traffic, which was crazy. I’m shocked nobody was hurt from cars trying to push their way through a mob. We moved to a spot that looked clear above us and set our lantern up. During this trip I’ve been hiding/placing a stone in each country with my friend Sylvia’s name on it. Sylvia passed away this year and she loved to hear about our travels, so these are in her memory. A stone, IMO (Sal thought we could make it work), was too heavy for a lantern, so instead we wrote her name on it and let it go. Sylvia’s lantern had no trouble whatsoever and floated up into the sky, joining thousands of others. 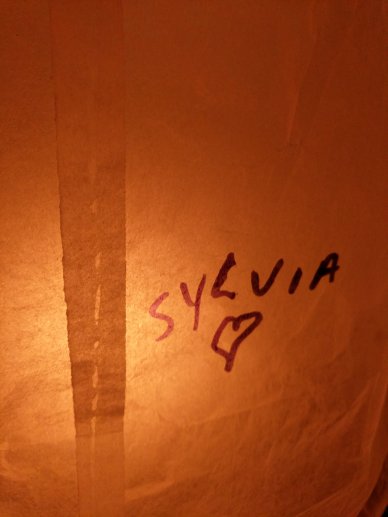 We had so much fun releasing Sylvia’s lantern we bought another one right there on the bridge. Nice and cheap for 40 baht. Ha. This one we wrote our big adventure 2017 on. As Sal was starting to light it up (it’s a ring that you light and eventually the whole thing burns and fills the lantern with air and it floats off) a young Thai guy who didn’t speak English tried to move his hand and show him how he should light the lantern. The guy, I’m sure, had the best intentions, but he had no idea Sal is a lantern savant and already released one without any problems. Sal kept saying thank you we already did one we know what we’re doing, but the guy didn’t get it. Sal was frustrated and starting getting a little heated, repeating over and over “khob khun krab!” (thank you), and motioning we knew what we were doing. Finally the guy left with his girlfriend and we released the second lantern. In hindsight we laughed about Sal’s reaction and it became our inside joke for the rest of the trip: “I SAID khob khun krab, SIR!” In the way you’d say, “I said good day, sir!”. It makes me laugh just writing it out. Sal rarely gets ruffled, and for that to do it was just funny.

Here is the second lantern being released. 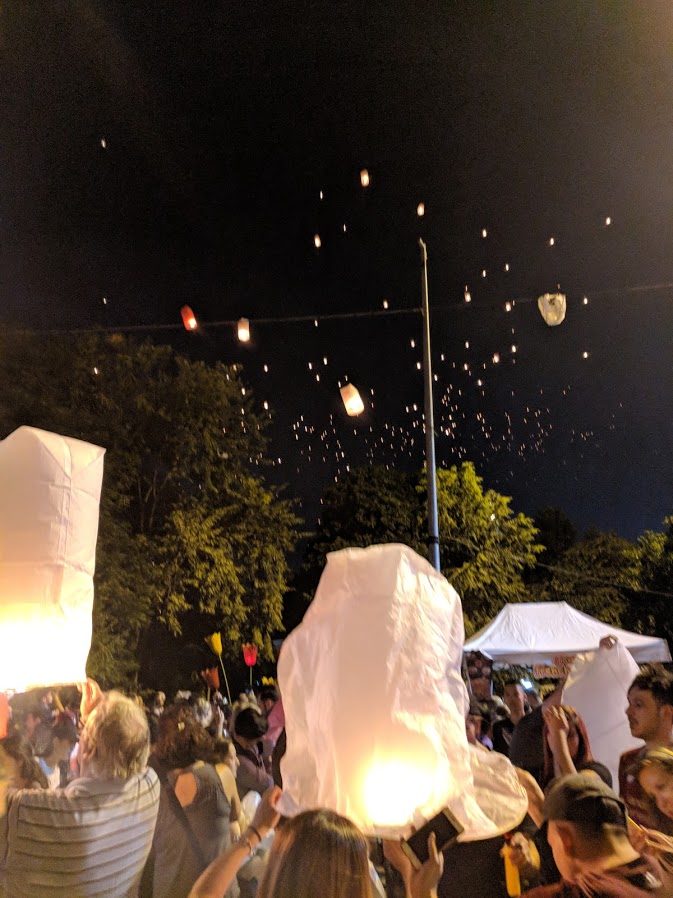 It’s truly a bucket list item seeing these lanterns released in such large quantity. The excitement from everyone is easily felt, and it’s just plain fun. We are lucky we’ve gotten to do it twice. Between lanterns and the ellies, I’d say it was pretty much a perfect 48 hours in Chiang Mai, but I SAID khob khun krab, SIR!