I woke up to some sort of announcement on a megaphone at 6:45 a.m.. Then there was another at 7. Clearly noise ordinances aren’t a thing here in Hanoi. I joked with Sal that they were probably saying, “OK, now let’s get the honking going again!”, because soon after the traffic noises got going. Oh, Hanoi!

On the agenda today was a tour with one of the Hanoi Kids. The Hanoi Kids are a group of young people who give free tours to tourists in exchange for practicing their foreign language skills. You only need to pay for admission or transportation for the Kids, and food/drinks if you stop somewhere. It got high reviews and I thought it might be interesting to have someone to talk to for a while that wasn’t part of a hotel. Or that I was married to. Hahaha. Sorry, Sal. Just testing to see if you’re really reading these blog posts or not.

Mina (not her real name, but she said it was what we should call her because it was easier to pronounce) was on time and alone. A young woman in her second year of university, Mina asked what we were interested in and offered suggestions on where we could go. I declined going to the jail. We decided to go to Ho Chi Minh’s Mausoleum and to the Temple of Literature. We took a taxi to the Mausoleum ($3.50 for about a 20 minute ride). I could barely watch the driving. I don’t know how he did it, frankly. I could have opened the car window and barely put my hand out to either a) shove someone off their motorbike, or b) lose my hand. Or at least injure it or parts of it greatly. We arrived and walked around the grounds a bit. Mina said they were currently embalming Ho Chi Mihn. He died in 1969…

Unfortunately we got there a little late, so we couldn’t actually go inside. Do’h! Poor Mina was quite embarrassed and apologized a number of times. We decided to walk to our next destination: the Temple of Literature. Crossing these streets is so much easier with a local. Most of the time we weren’t on a sidewalk, but again it’s because the motorbikes are all parked there. When we would cross a particularly bad street Mina would put her arm out for me to grasp, like a blind person or grandma. Or a blind grandma. I held on to her backpack once, too. Once I crossed when this large group was crossing. It was only after I was behind them for a bit that I noticed they were deaf and I wondered if it made crossing the street less stressful not to hear the noise, or more because you wouldn’t hear the bikes and all of the sudden they would be practically on you. Another interesting thing we saw was a motorbike pulled over. A woman was without a helmet (the law says you have to wear one at all times) and she was going in the oncoming traffic lane going the wrong way. I taught Mina what ‘busted!’ meant. The woman just laughed to the officer that was ticketing her like, “yeah, you got me!”.

Wiki describes the temple as such:

The Temple of Literature is a Temple of Confucius in Hanoi, northern Vietnam. The temple hosts the Imperial Academy, Vietnam’s first national university. The temple was built in 1070 at the time of Emperor Lý Thánh Tông. 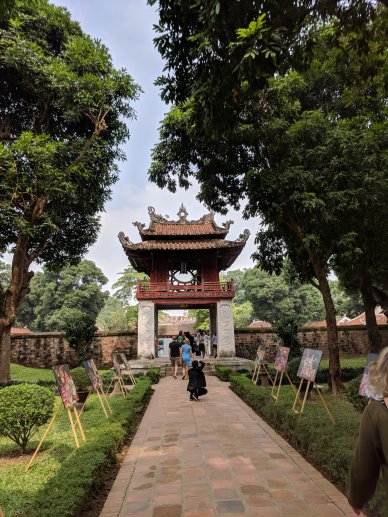 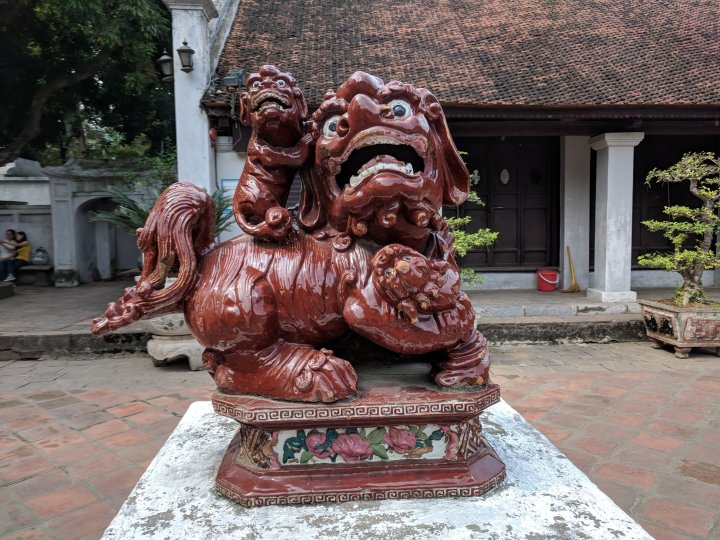 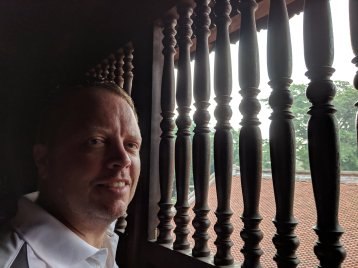 We happened to be there when graduating students were getting their yearbook photos taken, so it was sort of fun to see them in their traditional dress or robes posing for their own private paparazzi. There were quite a few of them!

Also, the offerings that are made to the statues of Confucius and his disciples —  coca cola light and crackers! They put the offering there and light the incense, and when the incense burns out they can take the offering back.

It got very hot at the Temple of Literature. When Mina asked what we wanted to do next, I request a cold drink. Then we walked and walked and walked until we finally stopped somewhere. I don’t know what she was looking for exactly, but it took a good 25 minutes to get there. I was feeling a bit woozy! We sat outside on our little plastic stools: Sal had an iced coconut coffee, while Mina and I had lemonade. Mine was frozen and it was delicious and obviously fresh. I did worry about ½ way through about eating the ice in Vietnam, but I had to assume she wouldn’t bring me somewhere I could get sick. So far so good!

While we were sitting there enjoying our beverages and chatting I noticed that my phone had given me a warning about my data use. What? I had literally bought 3.5 GB the day before, so there was no way that I had blown the wad already. At home over a month’s time I use less than 2. There was some bug with Google Photos or YouTube that happened and used it all up. Scroogled again, people…scroogled again! So we told Mina we needed to go get more data, and she kindly escorted us back to the store and got that sorted for us. They showed us a laminated price sheet, like they did the day before. I repeatedly asked for #7 (3.5 GB). No idea why I had to keep saying that; definitely something was lost in translation. Anyway, the laminated sheet said it would be 150K ($6.60 for basically a month), but once she got my phone set up she asked for 50K ($2.20). I don’t know if I got the local discount with Mina there, or what, but I just went with it. Although even Mina had no clue why they charged me that. She also didn’t know why they hired people who didn’t speak English. Sorta chuckled at that one.

We walked the few blocks back to the hotel and said our goodbyes. We have been carrying with us small gifts from NYC for the kids, so we gave Mina two sets and she seemed very touched and happy. That or she’s a good actress! It was a nice morning/afternoon, but by the time we got back to the hotel we were exhausted from walking in the heat. We stayed in for the rest of the night!