When we first checked into the hotel they had told us specifically about two tours: one food tour and one early morning flower market tour. We had already scheduled a food tour and we debated for several days on whether we should do the flower market tour. The problem was it started at 5:30 a.m., because the flower market is from midnight until 6 a.m.. With only one day left, we decided to bite the bullet and do the tour. They were a bit surprised. It ended up being a private tour, because nobody really wants to get up at the buttcrack of dawn. No sane people, at least.

We were quite tired, naturally, when the alarm went off. But we made it to a dark downstairs (someone was sleeping down there) hotel lobby on time, with our guide waiting for us. He actually seemed pretty awake. We grabbed an Uber and drove for about 15-20 minutes to the market. Even at 5:30 a.m. there was still some traffic as well as the mandatory honking!

The flower market is for wholesalers. It was colorful and lively, as it was getting ready to wrap up for the day.

Here’s a video we took of a delivery guy…
And another of us just walking around the market.

After walking around the market for a bit we took an Uber to the oldest bridge in Hanoi, Cau Long Bien. At first I thought we were going to just look at it from the ground, but no, we were going to walk it. This was another test for me as there were small gaps that let you see completely to the ground. We saw the market below slowing waking up. 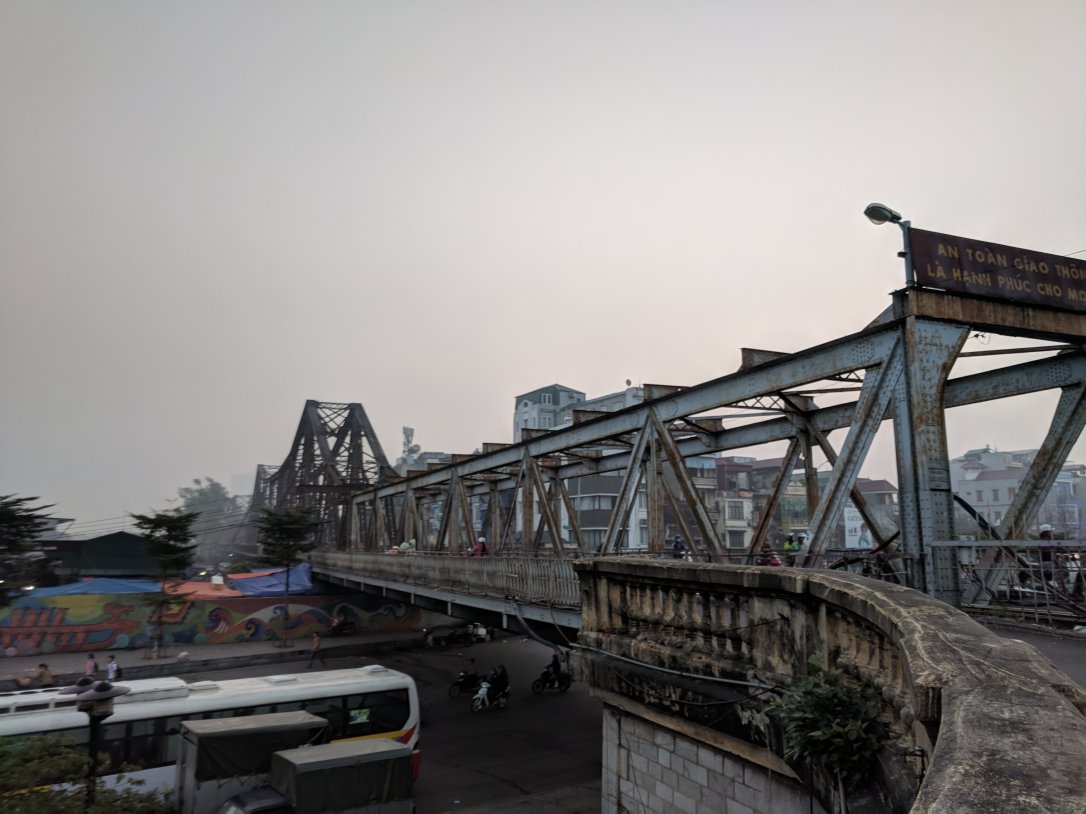 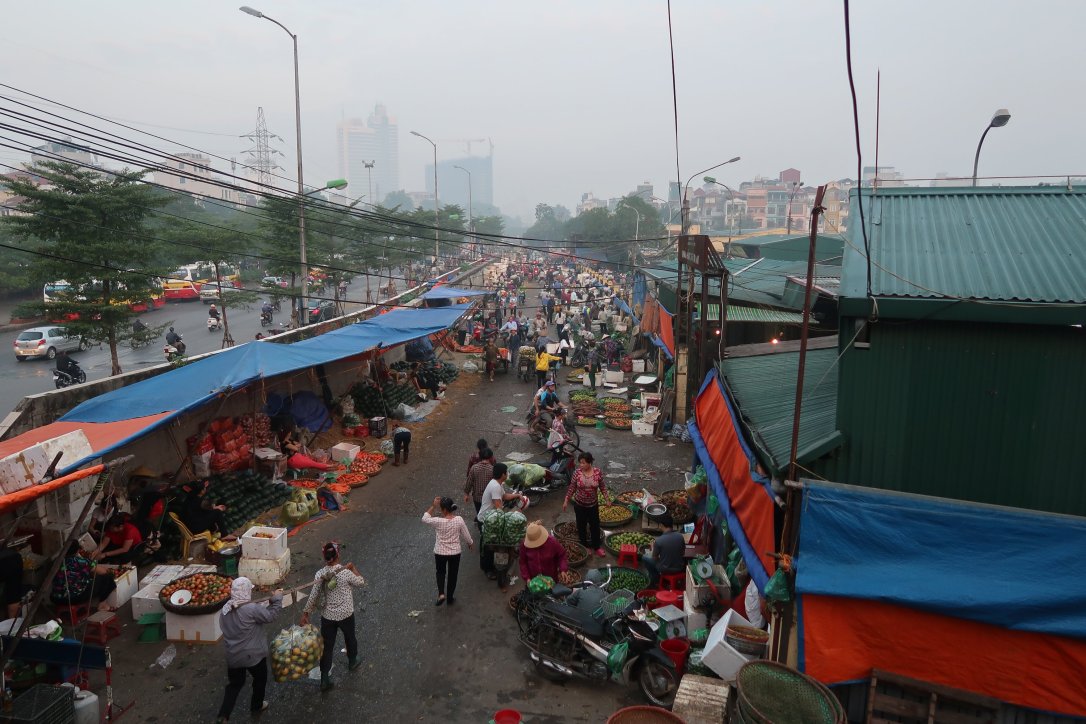 Yet another video – this one of the market from above on the bridge.

We walked to Red River and back, with the guide making sure to tell us bits about what we were seeing every once in a while. He was really quite good at that and it was really appreciated. We got to see a train crossing the bridge, too, which was slightly scary because it shook the bridge. It was amazing to me how much traffic there still was before 6:30 a.m.

Next we walked back to the Old Quarter and had breakfast. Nikki asked what the restaurants are like in Hanoi, so I took a pic from the outside to give you guys an idea: 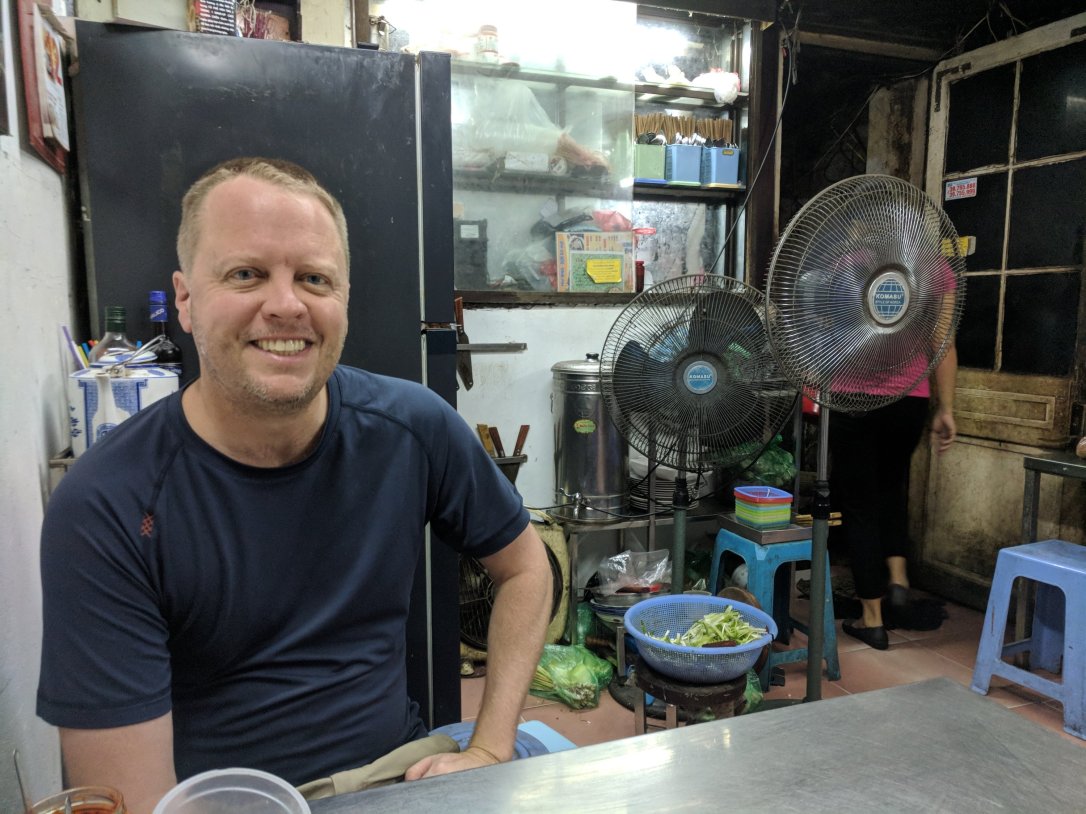 We walked more after that filling, delicious food, and made our way to a ‘cafe’ that was near a school. I had a drink with ice in it (really pressing my luck), and Sal had a coffee. We sat on our little stools watching parents go by with their children on motorbikes. Our little cafe was a popular place, and the woman who ran it had a nice smile for us. 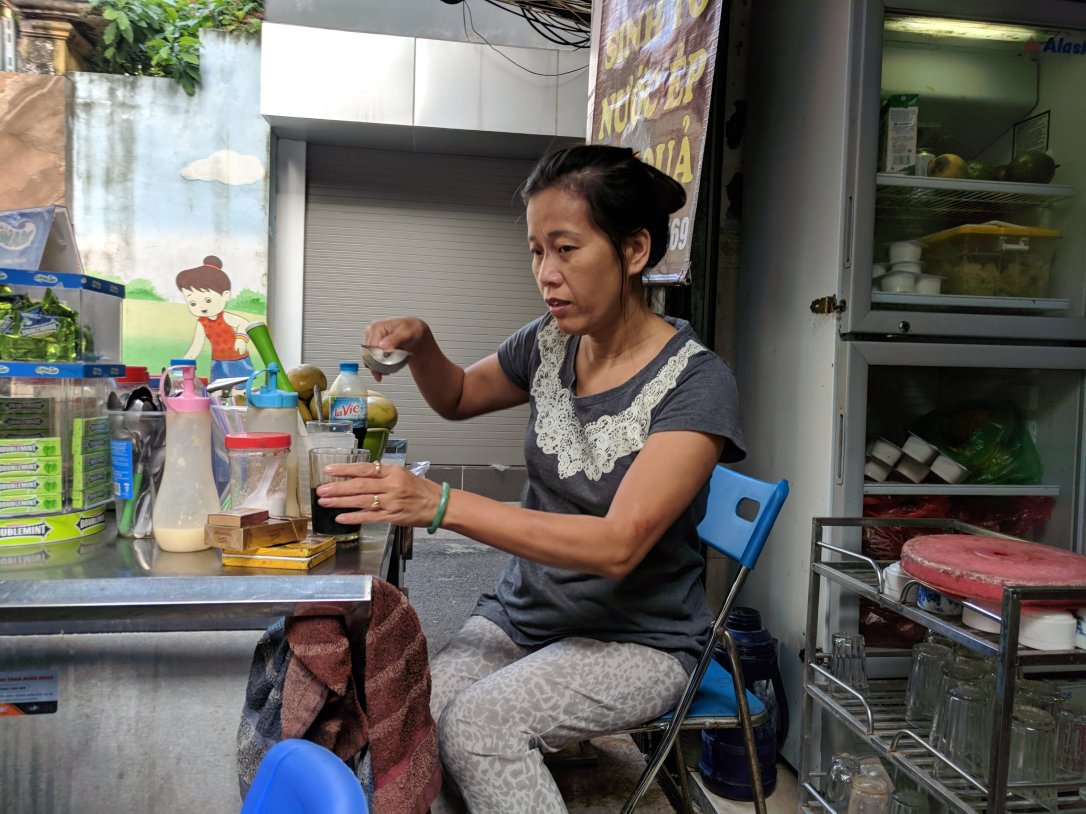 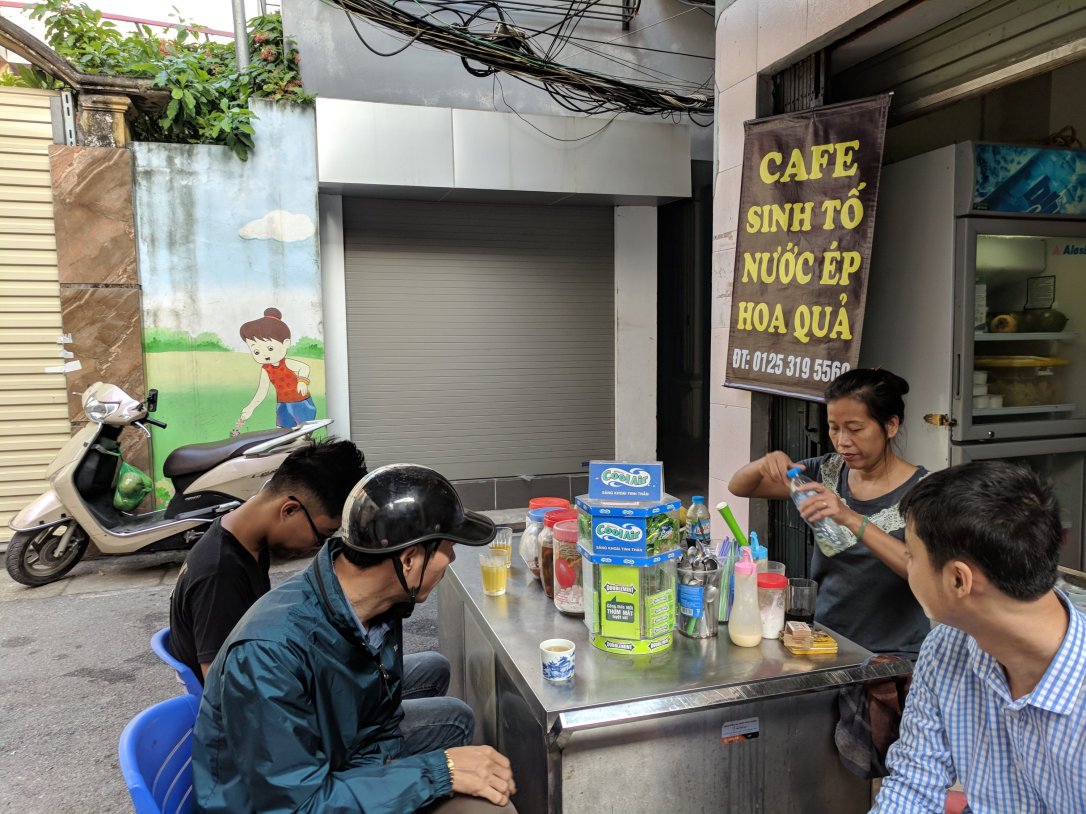 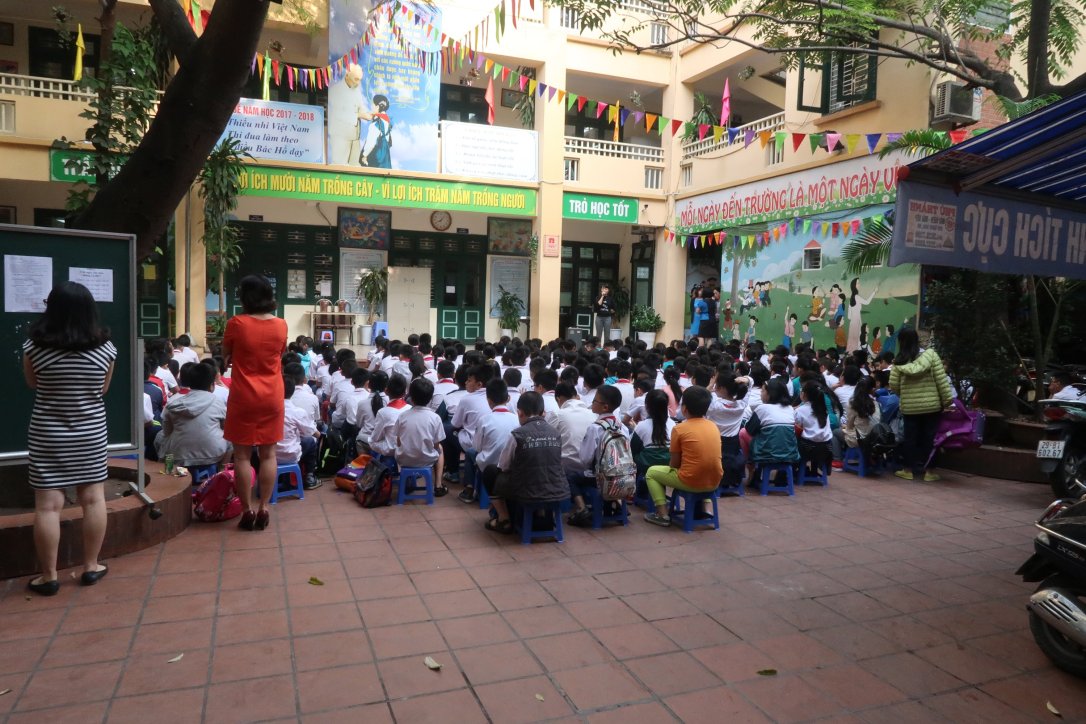 We began meandering back to the lake, and walked through this alley way that had a staircase to an apartment on the second floor. We wouldn’t have been able to fit on this thing. Probably a good way to stay on your diet, though. Gotta watch the calories or you can’t get to or out of your house again.

Soon we were back at the hotel and thanking our guide. I really enjoyed the tour and seeing a different side of Hanoi. We did some chores (that always means got the laundry together and photographed/inventoried it), and headed back out to have a refreshment on the lake. It was quite pricey, by Vietnam standards, but worth it for the views.

While we were enjoying the lake views we were trying to think of what to do next. We decided we wanted to see what Hanoi had to offer in terms of baked goods. We found this:

And it was as delicious as it looked.

We then decided to do a little shopping and meander a bit. We had decided we wanted to try to find the little neighborhood that had the train go through it twice a day. We eventually made it there, but we were early. 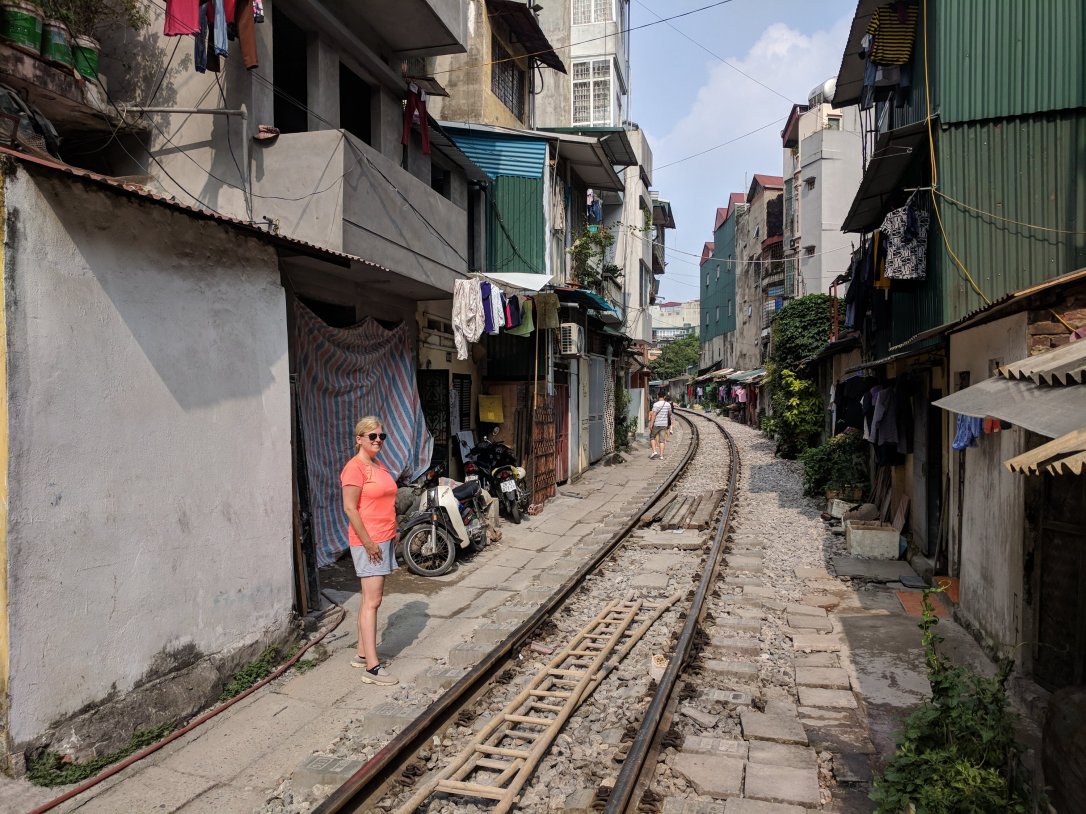 So after a few pics we decided to check out more fresh beer until it was train time. We ended up at the exact same place.

Sal had seen the train the night before at the fresh beer place, but somehow I’d missed it. Somehow was probably because of the fresh beer, but let’s not throw stones. It was time to go back and get ready for some awesome train pics. Apparently this train doesn’t slow down like the one in Thailand, so sounded a bit exciting. We got to the tracks and then didn’t know which direction the train would come. We mimed, asking a local woman, and she mimed back there was no train. We were like, “huh? Why is she telling us that?”. We saw across the street there was another fresh beer place, so went there and asked someone who spoke English, and he said no train during the week. Do’h! All that walking for nothing. When life gives you lemons and you happen to be at a fresh beer place, drink beer.

The beer at this new place was better IMO. While we were sitting there chatting, a British guy with some bags and a guitar case sat near us and eventually we got to talking. We had quite a nice time chatting with him. This is what almost always happens on our trips – we make friends the last day. Sorta funny. Unfortunately we couldn’t stay all that long because we had to get back to the hotel to meet up with Ms. Cham, who had set up our Halong Bay Cruise for us the next day and was meeting us at our hotel. We bid our new friend adieu and grabbed an Uber back to the hotel.

Luckily Ms. Cham was running late, so we got to the hotel and back to the room to drop off stuff. Soon there was a call that she was downstairs, and I finally got to meet the woman I’d been chatting with on WhatsApp for a few months. We paid for our cruise and I gave Ms. Cham a couple small gifts for herself and her young son from NYC, and she had a gift for me. Very sweet!

It was time to eat again, so we decided to go to a BBQ place where you cook your own meat. It was fun and delicious. I have really grown to like Hanoi – especially the Old Quarter. Delicious food. 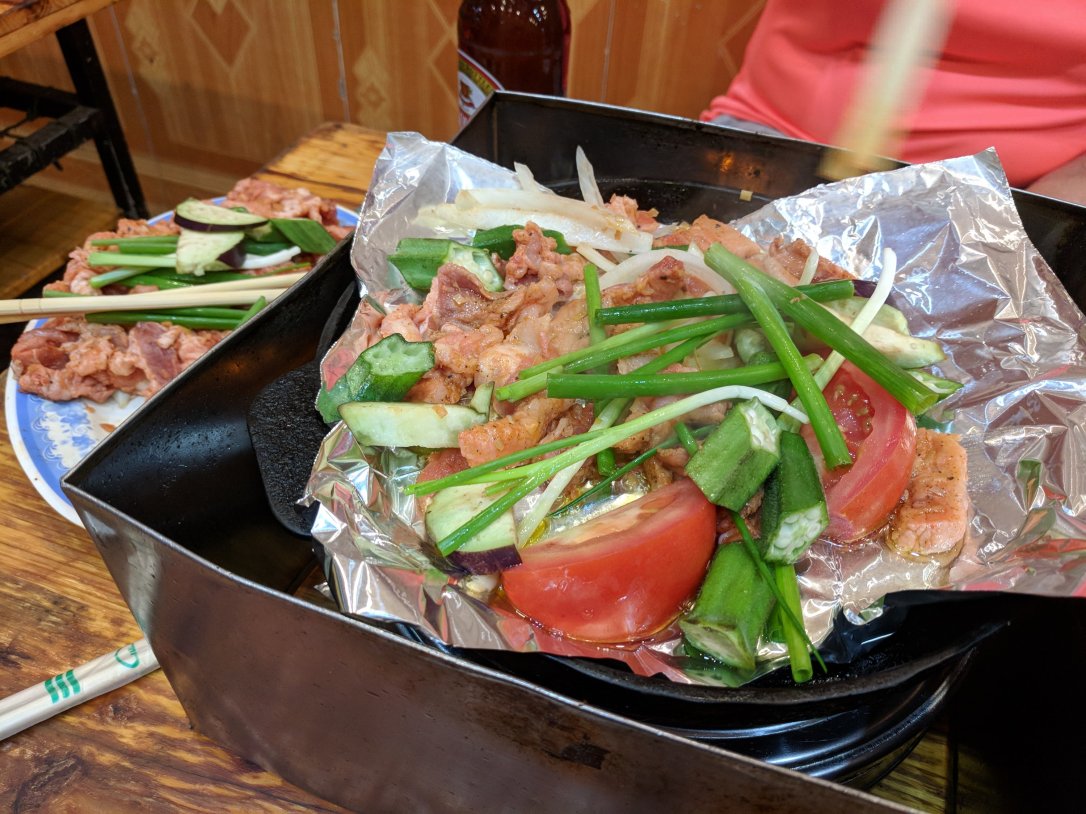