We woke up early and stiff from the bed. Sal felt a little better, though, so that was good. We had banana pancakes for breakfast, which is fried dough with bananas and honey. It was yummy.

Our guide, Toan, and our driver, Chow (no idea re: the spelling and I probably mispronounced it the whole time), picked us up at the Homestay. We chatted a bit and Toan said he was dropping us off to do a boat ride at Van Long Wetland. I guess it was part of the fee he charged me. I had no idea. Our rower only spoke a few words of English. The sun was extremely hot and the boats have no covering. The lady rowers wear the traditional Vietnamese hats for shade. Thankfully I had an umbrella. 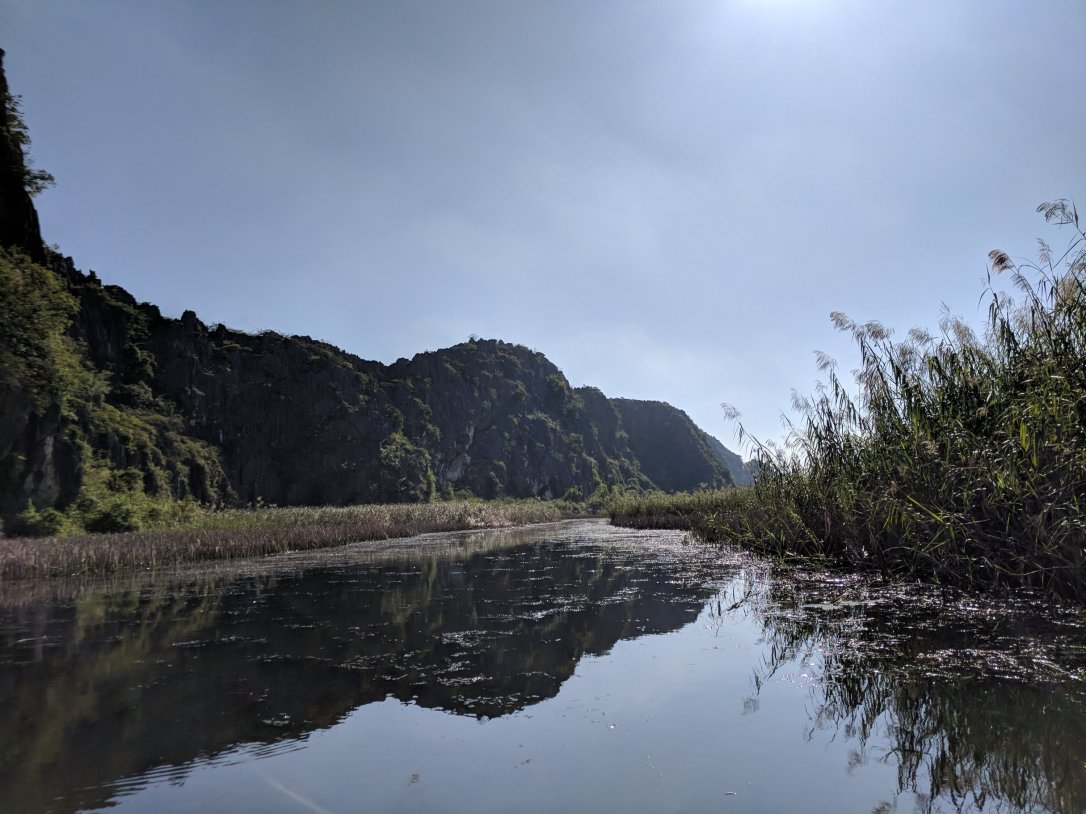 It was a long route, with the halfway point at a cave, which was really cool. Especially since we missed it on our kayak adventure in Halong Bay.

I really don’t know how the lady made it rowing, without stopping, to the cave. We had the cave all to ourselves and it was very peaceful.

She rowed back and she stopped and picked me a water lily.

There she showed me her hands and how much they hurt from rowing. It was at this point I thought, “are we going to have to tip this lady?”.  And I hoped not because a) we weren’t told we would have to, and b) we only had a very small amount of small bills. At the end of the ride we tried to give her money and she pointed to the higher bill in Sal’s wallet. Sal tried to mime that the guide had already paid for the trip, but she kept pointing to the higher bill. We had her walk with us back up to find Toan, then we explained to Toan what was happening. He chatted back and forth with her a little, and she finally took the money we offered. She was not happy, but the next highest was five times that amount and we were not going to give her that much. Toan said normally they got X amount, once we walked back to the car. I felt horrible! He should have told us to begin with we were taking a boat and would need a certain amount for a tip. I was a bit put off thinking I unintentionally ripped off the older woman.

This didn’t give me a good first in-person impression of Toan. I started getting a little worried because he was to be our guide for three days…

Our stop for the night was going to be Mai Chau and it was a ways away, so we hopped back in the car. I asked to stop at an ATM because I wanted to get more local currency just in case there were any other surprises. We stopped at one and after being timed out the first time I tried to withdraw, it worked the second. When I turned around there were four people standing there. I don’t know where they’d come from! Toan asked me how much money I had and to count it, but I really didn’t feel like counting money in front of everyone. I turned my back and did it, but it felt a bit uncomfortable.

We got back on the road and soon it was lunch time and we stopped at a place whose specialty was buffalo. It was a very large space, that seemed like what we would consider a huge garage or warehouse. I thought the buffalo was just OK. Sal liked it.

I had to go to the bathroom so badly, but it was a squatty and I held it for 90 minutes instead. I really need to work on my squatting before the next time I come to Asia. Sal used it and said he was, “mostly successful”. I did not ask what that meant because I was afraid of the answer.

We had a couple scenic stops. 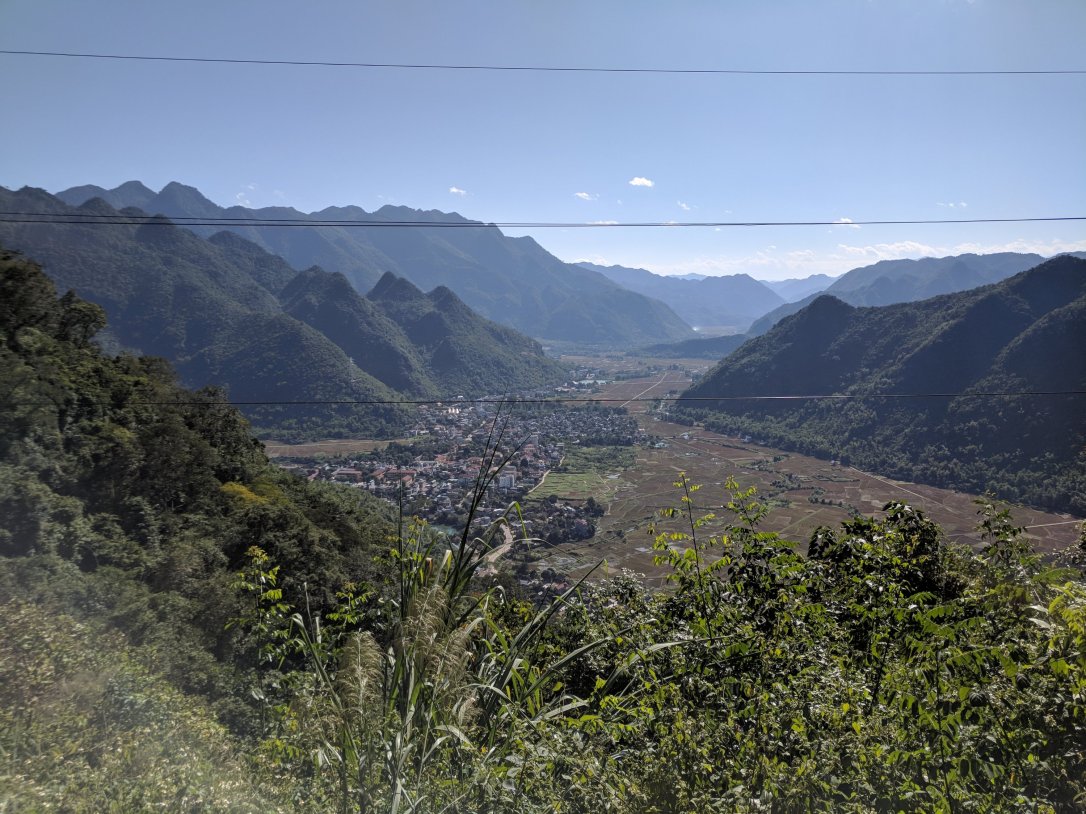 Then we eventually got to our hotel, Mai Chau Valley View. We had a very nice view from our pretty modest room. 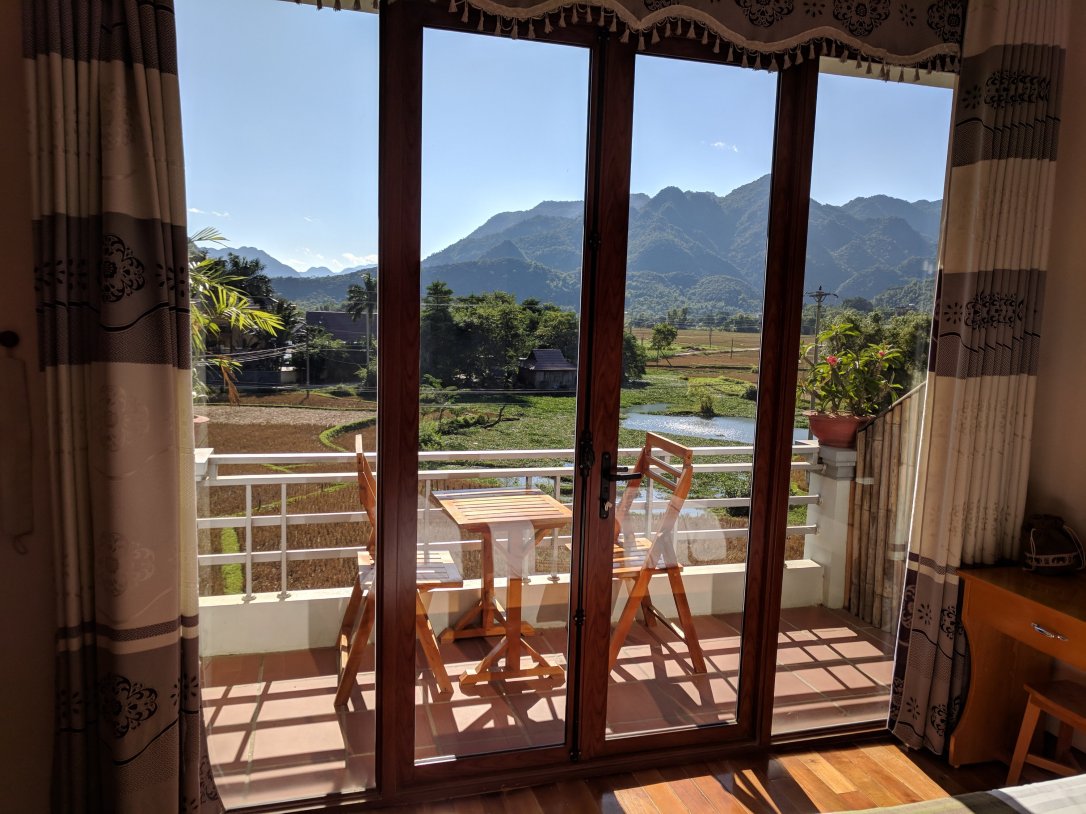 It was extremely hot, so we decided not to start our walk until later when it hopefully cooled down. We rested for about 90 minutes, then met up with Toan again. Our walk was almost totally flat, and we were walking through a nearby village.

The strange thing about the guided tour was Toan walked quite a bit ahead of us 85% of the time. It made asking questions really quite difficult. We walked about an hour and a half. The area was very beautiful, as you can see from the pics. Toan had mentioned we’d have dinner at a Homestay, but when we met in the lobby of the hotel at the agreed upon time after the walk he told us we would be eating at the hotel. This was fine – the food there was good. The owner was extremely nice and friendly, which was what we needed at that point. He even shared his rice wine with the patrons and it was pretty good! Not like the lighter fluid we had in Indonesia. So it was a good ending to a day with ups and downs.