I had read about The Riverboat Postman Cruise about an hour north of Sydney via train on tripadvisor. I wanted to do a tour that was a little off the beaten path, as I’d have 10 whole work days alone to see the sites of Sydney. This definitely fit the bill. They describe the tour as such:

Come cruising with us on the Hawkesbury Mail Boat, the famous Riverboat Postman, and enjoy the magnificent scenery of the lower Hawkesbury River as we deliver the mail and other essentials (the odd bottle of whiskey or rum…) to the river-access-only settlements upriver from Brooklyn.

When I called to see if there was availability the woman asked me if I was OK with stairs and she explained there were 100 (up and down) to cross over from the train stop to where the boat took off in Brooklyn. I laughed at the piddly 100 step number and told her it was a drop in the bucket compared to the Coogee to Bondi walk. She asked if there were pensioners going. I told her it depended on what you considered a pensioner, and I shared my age with her. She said I was, “still young”. I thanked her for the compliment! It wasn’t until I got to the actual boat for the trip that I understood that comment. But I’m getting a little ahead of myself, as usual.

As many people in my life know: I’m pretty bad at directions. A strange phenomenon happened when we arrived in Sydney; somehow for the first time in my life I knew where I was going! A couple of times I guessed the direction even better than Sal, who normally knows where we are going. We attributed it to us being ‘upside down’, so my backwards sense of direction actually worked here. It was quite strange not going the wrong way. It basically only lasted as long as I had jet lag, though, but it was fun while it lasted.

The train ride started liked any other train ride out of a big city; graffiti, lots of wires, fences, etc. Nothing unusual. But when we got to my stop it was the prettiest train stop I’ve had yet.

I easily walked up and across the stairs and found the little building connected to the dock where the mail boat would launch from. There was a small line of people trying to buy tickets. Before the woman sold any of them tickets (it was a full boat) she asked if I was Neeners. She had told me on the phone that I sounded young, and once I got on the boat I saw that I was indeed young when compared to 98% of the other people on the boat. I liked it!

I’ve always enjoyed the elderly, so this little boat trip was right up my alley. I found an empty seat at a table for eight and asked if it was available and if I could join them. They welcomed me with open arms. The five of them sitting nearest to me were a group. Our table was international, with people from Australia, France, Spain, and the US. I was quickly introduced to the five, and the French man with the heavy accent immediately asked me where my husband was and if I’d killed him. I thought I misheard him. The Australian woman sitting next to him laughed and repeated what he said. She explained, “He’s 89”. I told him, “It’s interesting that the first thing you thought of when I said my husband wasn’t there was that I killed him!”. He just chuckled.

The boat captain was in the same room as everyone else and hearing him was next to impossible. Old people are very, very loud.

I eventually went up to the top deck to see the views and hopefully hear some of the tour. It was pretty and serene up top and I started taking some pics. 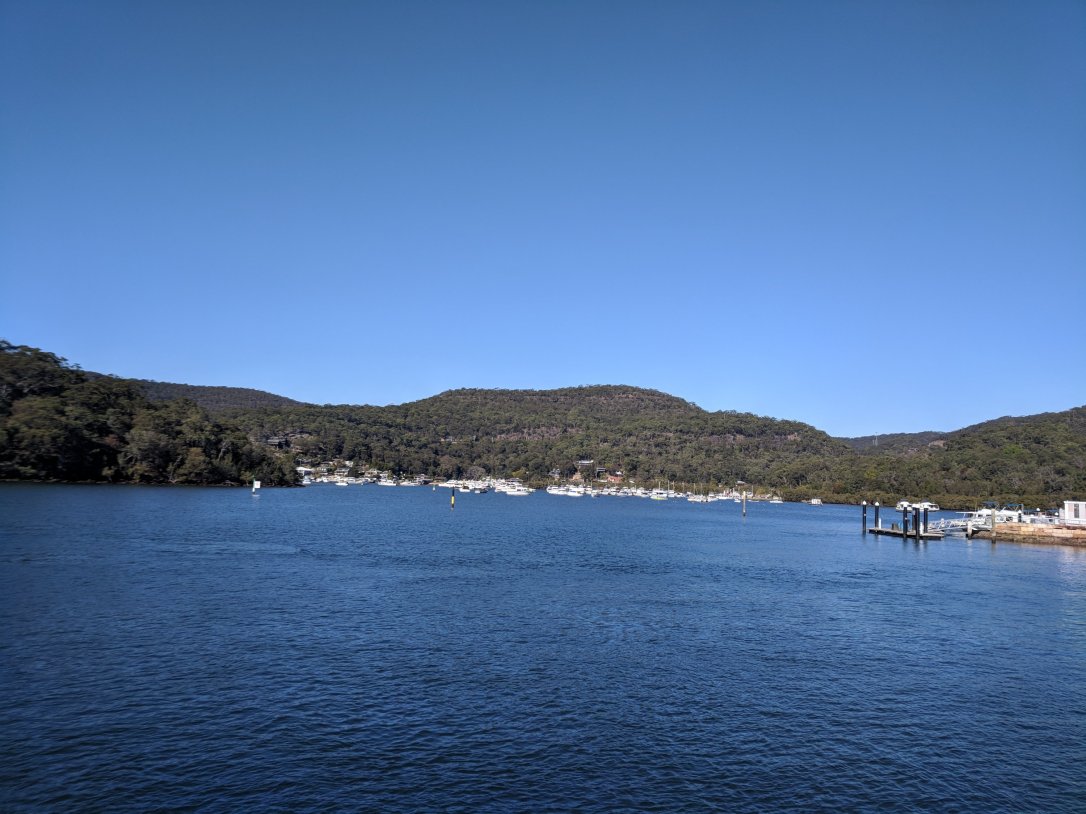 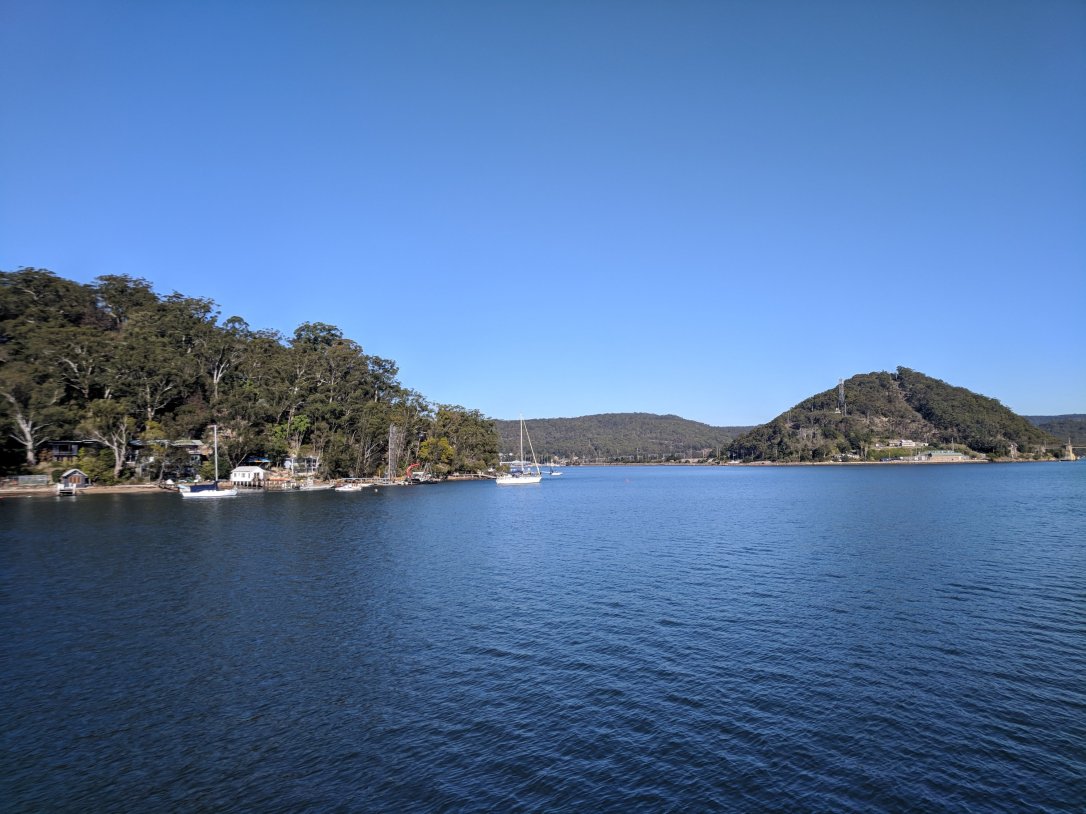 And another short video.

When I first went upstairs there was only two of us: myself and an Australian man who was wearing shorts. I only bring up the shorts thing because it was very cold. Anyway, we started chatting, and once he found out I was from the US he got excited and started talking about Disney World. This was a first and sorta funny. I was just happy that nobody here has brought up He Who Shall Not Be Named; anywhere else we go once they find out we’re from America they almost always bring him up somehow or another. It’s a refreshing change.

Now she told this to myself and the woman from Spain, and then she started laughing. She was laughing so hard she was crying, so I was sure she was lying. I heard that they like to tell tales here, so surely there wasn’t a bird that would kill you. Turns out I was wrong. I asked if they ate people, since they killed them. The Australian woman replied, “No, they just off ya if they don’t like ya.” So one more thing to worry about when we get up north, because apparently these huge beasts are running wild up there. We’ll see…

We made our way back downstairs to un-thaw and have some lunch. When I sat down the French man started talking to me again. His accent was so strong and because of how loud everyone was, it made it especially hard to understand him. He was apologizing for asking me if I’d killed my husband! “I’m a bit cheeky!”, he explained. I assured him I loved cheeky and it was no problem at all.

We would stop and deliver/pickup the mail occasionally, which was sort of fun.

One residence was a hermit that the regular postman refused to deliver mail to because of being attacked by his chihuahua. Not sure if that was one of the ‘tales’ or not… The hermit would leave some sort of marker on a post by the dock to let the boat know if he had mail or not. Unfortunately we didn’t get to meet him that trip. Truth be told, I couldn’t hear a lot of what was being said. Eventually I gave up trying and just had a nice chat with the little group seated by me. We got some good stories in and one of the ladies said to me, “I wonder what you will tell your husband about this cruise!”. I replied, “I’ll tell him that I met some interesting and fun people.” Then I waited a second and added, “and a French guy.” Sadly, he didn’t hear my response, but the woman who made the comment to me did and we both got a big laugh out of it.

I don’t really know what was up with this guy. I know the Captain announced that we were going into ‘international waters’ and we had to deliver the mail to this guy: 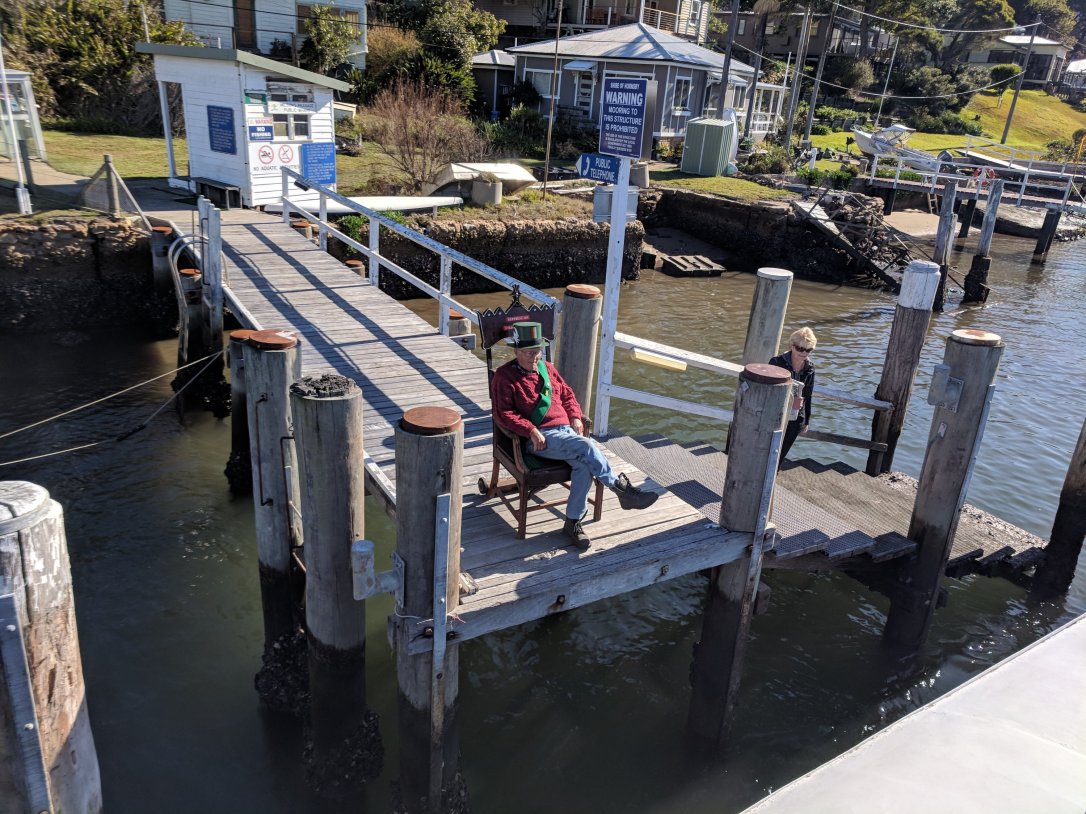 Video when we arrived – didn’t realize you couldn’t really hear him and could only hear me chuckling. Good grief. He was a character, for sure. And before we knew it, we had our last mail pickup of the trip.

Australians have a fun sense of humor. I truly enjoyed my time on the river and would recommend it for a relaxing tour and to see something different. Just be prepared that you will probably be the youngest person on the boat.

I caught the train back to Sydney, and Sal and I met up with one of his old coworkers for dinner. He was definitely jet lagged and we still weren’t 100%. Needless to say there were some laggy conversation occasionally, but it was good to see him. We enjoyed dinner and called it a night.