Note: I’ve been dreading writing about this day because I was an idiot and paid for it basically the rest of the whole trip. Learn from my mistakes, people.

I got almost 9 hours of sleep and it was glorious! I woke up at 5:00, but that was OK because we needed an early start. We went to 7-11, then took our food with us to the train station and caught the local train (crowded with school kids) to Fushimi Inari Shrine. This shrine is very popular because of all of the torii gates.

For once the jet lag worked in our favor, so we got an early start. Walking to the entrance, we saw some senior exercisers. I’ve seen this several times now in Asia and it always bring a smile to my face. 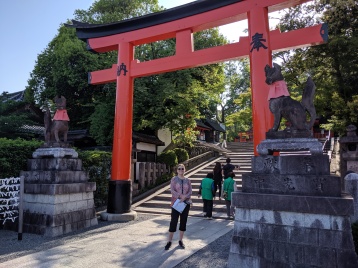 In addition to the red torii gates, this shrine is known for the foxes. In Shinto mythology the fox is Inari’s vehicle and guardian.

Shinto shines also have purification stations at the entrances. You bow, rinse both hands, and then take a drink (or pretend to), bow again.

We started through the beautiful gates. It was so lovely with the sun shining through. 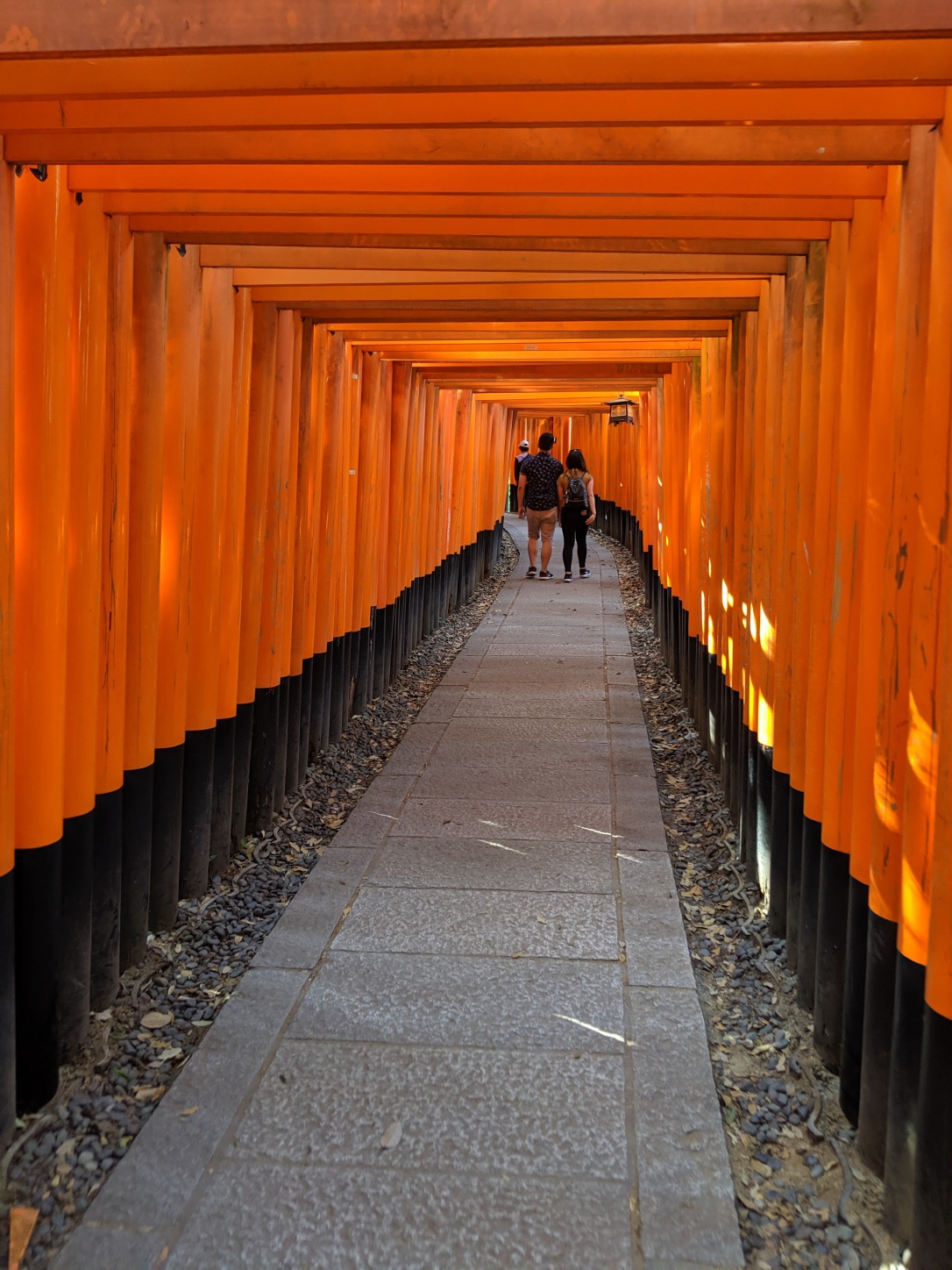 Notice this gate is not as tall.

We go about 1/3 of the way up the mountain and I was in awe of how beautiful it was and was videoing and noticed a step down. I even said, “oh, there’s a step. Gotta be careful!” and not 15 seconds later I fell on the next step. It took a certain amount of talent. Sal said he didn’t warn me about the step because he heard me say that myself. I’m such a doofus. I can laugh about it now, but at the time I was all:

It literally knocked the breath right out of me. I fell forward on all fours, with the majority of the force landing on my right knee and putting a hole in my pants. Sal had me clean it out (we always have the first aid kit with us, thank goodness) and take Advil right away. Luckily we were somewhere we could actually get out of the gates and sit down. It was pretty sweet that another tourist saw me fall and asked if we needed bandages. I felt like I sat there on the ground, in the gates, for ages trying to talk myself into standing up.  In actuality it was probably just a minute or two tops. I was sort of afraid I had broken my kneecap and wondered what in the world I was going to do. I was a third of the way up the mountain, it was going to start getting crowded soon, etc..

Sal bandaged me up and I stood. Then we got back into the gates and continued. At first even though it hurt it wasn’t super horrible because it was a little downhill section.

The bad news is soon we were back to steps. They weren’t steep by any imagination, but it didn’t matter because it was very painful. I felt like crying both from the pain and because this shrine was the one place I absolutely wanted to go to in Kyoto and really wanted to go to the top. 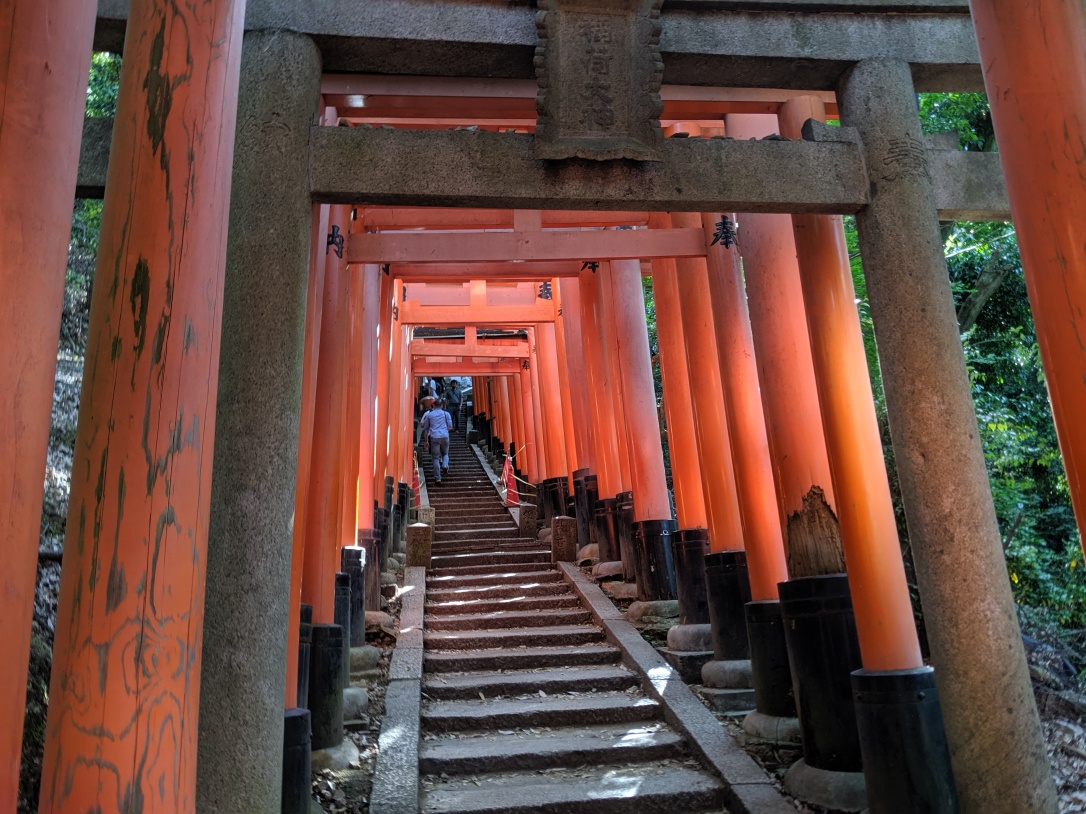 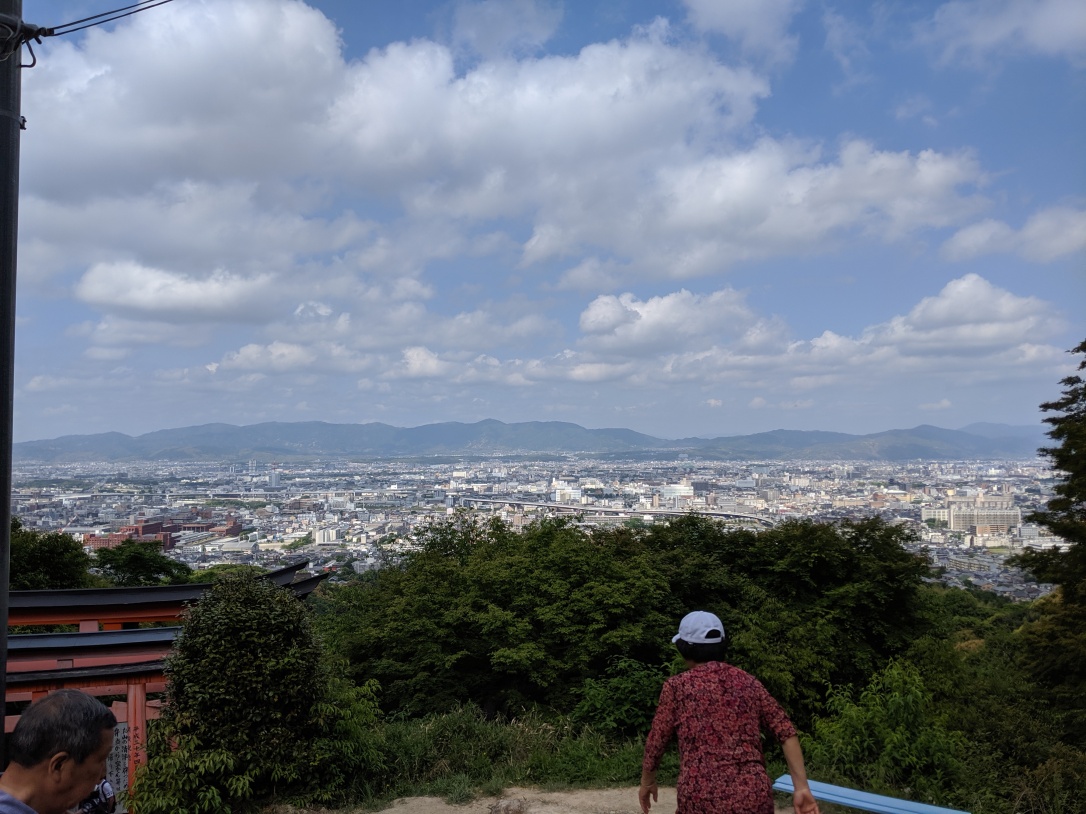 Here’s some things I saw walking back down:

It worked out well because Sal said the stairs got more steep and I wouldn’t have been able to do it anyway. I stopped at a little shop on the way down and used Google Translate to try to communicate with the owner. She was very smiley and it was a fun interaction. Translate once again did the trick for the most part. This would be a common occurrence the rest of the trip in Japan if someone didn’t speak any English. Eventually I made it down the hill and was shocked at how crowded it had gotten! Yikes!

One bad thing about this particular shrine – and actually a lot of places in Kyoto – is there aren’t that many places to sit (public benches, etc.). Seemed odd that there weren’t  benches after walking flight after flight of stairs. I leaned against some rocks and watched the crowds as I waited for Sal to climb back down from the top. As I was watching, a group of about 12 students and their teacher came up to me and started speaking to me in English. I had read that this might happen in Japan, and actually hoped it would happen to us. The teacher filmed the whole interaction and the kids tried to have a conversation with me. They did OK and would look to their teacher when I would ask them a question back like, “Say what now?”.  It was pretty funny. They also gave me a handmade book on the town they were from, Gunma, and it was two hours from the Kyoto. They asked for a photo with me and when I tried to give them the book back they told me it was a gift. It was super sweet and reminded me yet again why I love travel; it’s not just about the new places. 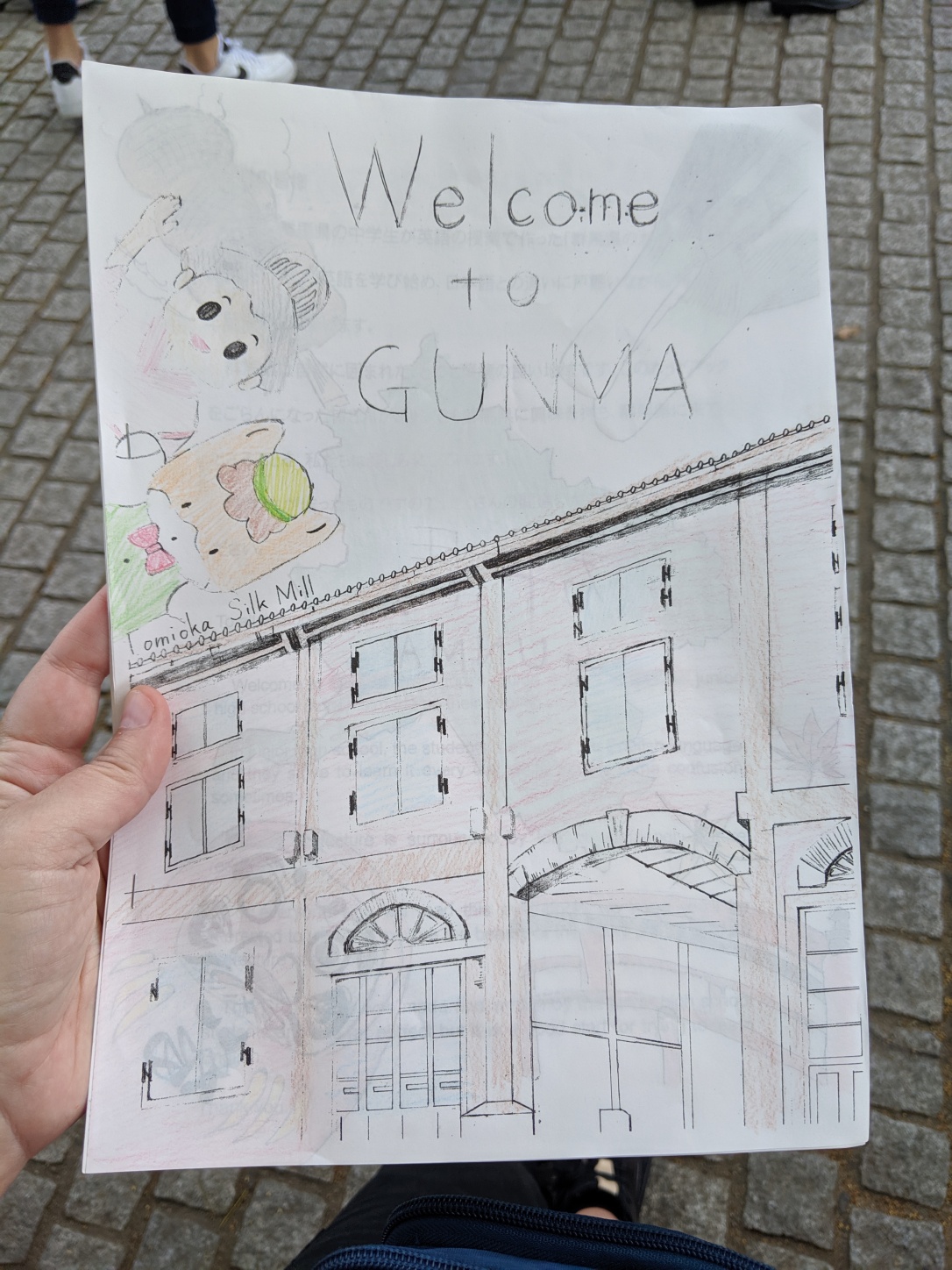 Two things happened while Sal made his way back down the hill. First, he ran into the crowds. Yuck. Very glad we missed that. I think in the areas with the shorter gates it would have felt almost claustrophobic.

And secondly he fell and twisted his ankle. Good grief. We were both hobbling around and in pain. Not a fun way to start the first full day in Japan!

We had to go up a lot of stairs to get to Kyoto train station. It worried me how painful it was. When we got back to Kyoto station we found a pharmacy. Trying to describe a cold pack to the clerk was interesting, but eventually she understood and trotted/ran to get some. I noticed this a few times when the Japanese would try to hurry to help they would do a fast little trot/shuffle with small steps. She was great. We went back to the hotel so I could change pants and put the cold pack on my swollen knees for a little while. It was a nice relief and definitely what I needed. Nothing appeared to be broken, just badly bruised and swollen.

We decided to o to the old town of Gion. We took the subway then walked for a bit. So much walking, and you really notice it when you are in pain. The good news is it was mostly flat so doable. We decided to get some lunch. It was time to try ramen for the first time! We found the little place and luckily there were two Western men that told us how to go about putting in our party number via the computer screen. It printed out a QR code and from there you could scan it to see how long the estimated wait time was. Sorta cool. We did some shopping while waiting. I have to tell you that out of all of the countries I have been to my absolute favorite for shopping was Japan. SO many cute things. I loved it. And I’m not really a shopper and usually only buy gifts for other people.

Soon enough it was time for the good stuff…

The international travel police (me) were on the case at the ramen place, though, because the guy that was sitting next to me at the counter blew his nose. I read multiple places that that was a very big no no in Japan! So we weren’t even there 24 hours and I was finding these unwritten rules weren’t really correct. I said very quietly, “oooOoOoOoh!”. I gave him the side eye and he hid his shame (Kleenex). It made me giggle. They also were talking in the subway, which I had read was also a no no. So there you go.

We walked a bit in the area by the river. 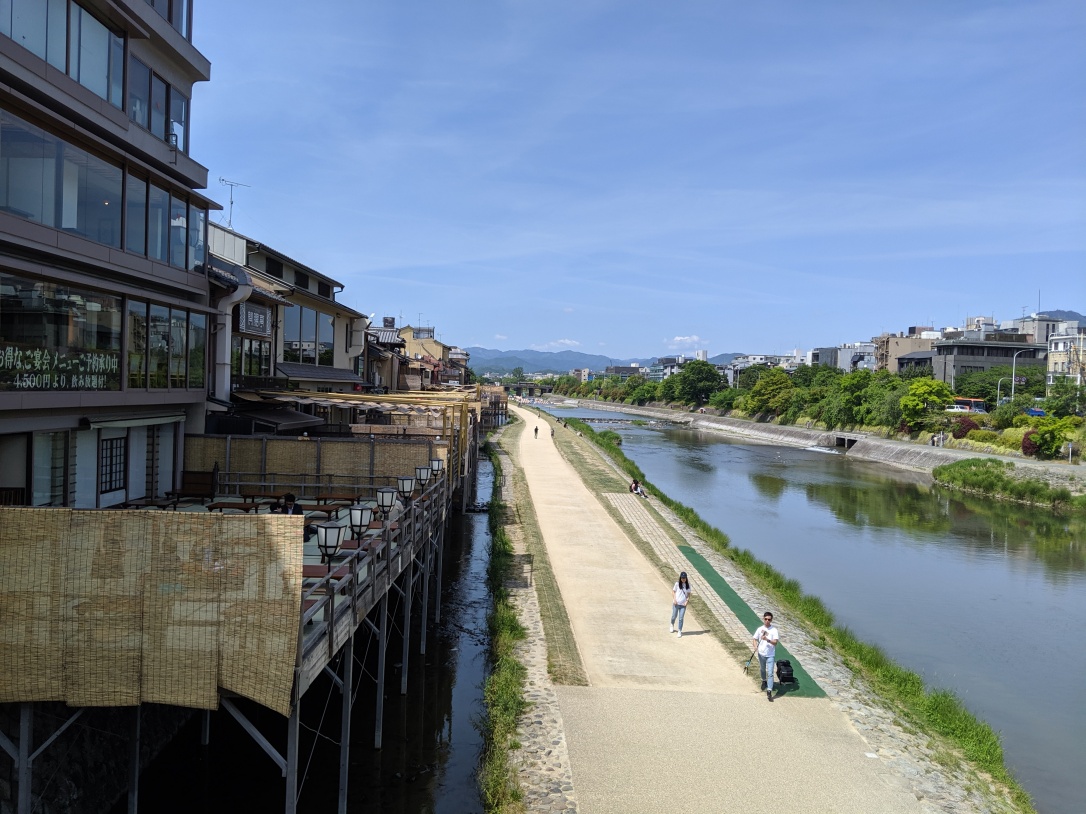 We were hot and my knee and Sal’s ankle was hurting, so we found a little cafe where we could just get a soda and have a rest. This was when we ran into indoor smokers. For as clean as Japan is and as thoughtful as the people are, nobody seems to care about the indoor smoking. It’s a huge turn off to me that there is smoking where there is food. We Left pretty quickly after the smoking started.

Now let’s talk about the bus situation. It’s crazy. End of story. Just kidding, but it’s confusing and our first time trying to use it was a big headache. We kept getting the start location wrong, which meant basically walking in circles trying to figure out where the bus was going to stop. Google maps was confused a few times and that certainly didn’t help the situation. I was definitely grumpy, because at this point any extra steps were painful. Eventually Sal figured it out. The bus took us back to the station and we walked to the hotel from there and rested a bit and iced again. It felt good to relax and I probably would have been fine staying in the hotel, but we were finally in Japan and needed to try more food.

I knew the restaurant we were going to was at the station, but the station is very big and even had what seemed like a department store in it. Turns out the restaurant was in there. I asked a woman where it was and she did the little trot/shuffle to ask someone else. Told ya they do that a lot! Anyway, she came back and rather than try to say, “take a right, then a left..” she had us follow her all the way to the elevator. Yep, the Japanese are definitely kind people.

We went all the way to the top where the restaurants were and eventually found the place because it had the longest line. Moving down the waiting bench (now that I think about it, probably the only benches in Kyoto were outside of restaurants where you waited) hurt to get up and down with the knee. Eventually it was our turn and they sat us at a big communal table, which was good so we could see how everyone else did things. Dinner was pork cutlets.

My notes for the dinner said “sake, sake, sake”. I’m certain it was purely for medicinal purposes.