My jet lag wasn’t over yet – only five hours of sleep. Oh well, it could be worse. I was up at 3:00 a.m. though. We woke up very early, checked out quickly, and took a cab to the train station.  This was the only time this trip that we were given an estimate on how much the fare would be and it was actually lower. We left so early it was strange seeing empty streets during daylight hours in Hong Kong! We took the Airport Express back to Hong Kong Airport and it couldn’t have been easier. The apartment high rise portion of the city seemed like something out of a science fiction movie.

We decided to pay a little extra for a ‘U First’ ticket with Hong Kong Express. It comes with a few perks and one is that you get to go through a special line for check in. Even though we had an early morning flight, the regular check in line was extremely long, and we were really happy we got U First and didn’t have to deal with that headache. We got through security super quickly again, as well. We took the tram back to the gates.

We had a lot of time left at the gate, so I did some shopping and spent the last of our Hong Kong Dollars and Sal watched the planes land and take off. 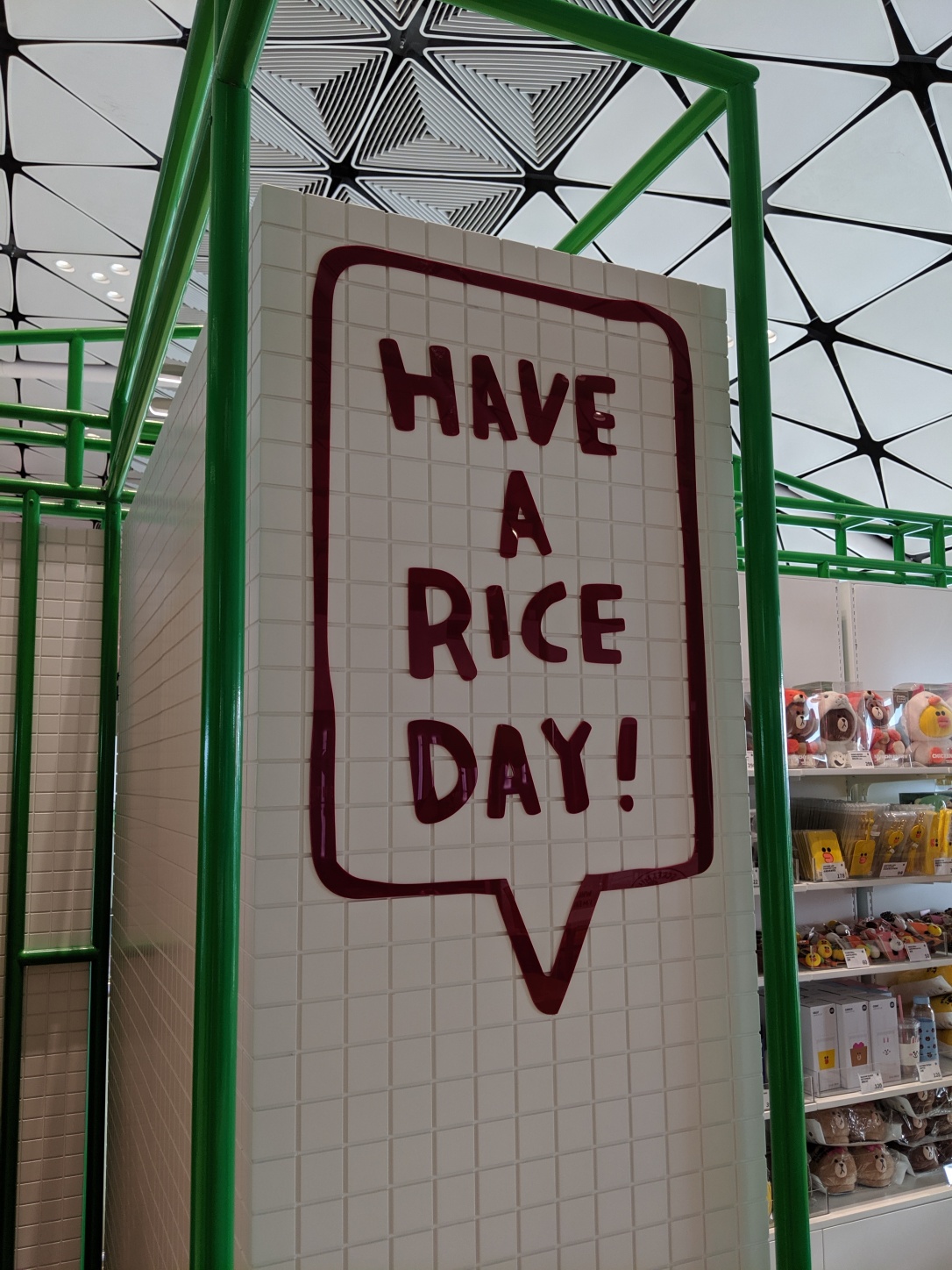 There was nothing remarkable (bad or good) about the flight itself, except we pre-bought our food for the flight and my note says “plane food absolutely disgusting”.  I must have blocked it out, or the amazing Japanese food to come must have totally wiped out the memory. Haha.

Our first views of Japan. The mountains were beautiful!

There were no lines through passport control and the only negative was we had to wait quite a while for our luggage. Maybe we were just excited to finally be in Japan and so it seemed longer than it actually was. One thing I did notice right away was there was a lot of signage in English, which was reassuring. It was fairly easy to find the JR station (they manage a lot of trains in Japan) to buy our passage from Osaka to Kyoto, where we would be the next five nights. The agent was very business-like and spoke broken English. Like Hong Kong, Japan also had travel cards (which were usually regional) that you can use at convenience stores and for almost all modes of transportation. Of course I chose this one:

We made a rest stop at the train station and it was extremely stinky and not all that clean. I was a little surprised because I thought Japan had the reputation of being so clean and it wasn’t the best first impression. I’m happy to report that it wasn’t ever a problem again. It must just have been a one off. There were some squatty potties, but there were also western toilets. Another thing I’m happy to report is in the almost three weeks we were in Japan there was always at least one western toilet. It might sound ridiculous, but any time you go to Asia and are of a certain age, that whole squatty potty thing is a definite concern!

We got to the train tracks and  had just missed the train. A worker proudly showed us where to line up for the train and told us we could just leave our luggage there because Japan was very safe. This was the first time we saw some vending machines in Japan and we would see them everywhere after that. We got some beverages and waited for the train. Picking out a drink when you don’t speak the language is a real crap shoot — I’ve never had such strong black tea in my life! Wow. I avoided that brand the rest of the trip – hahaha.

The train arrived and I was very excited it was Hello Kitty. 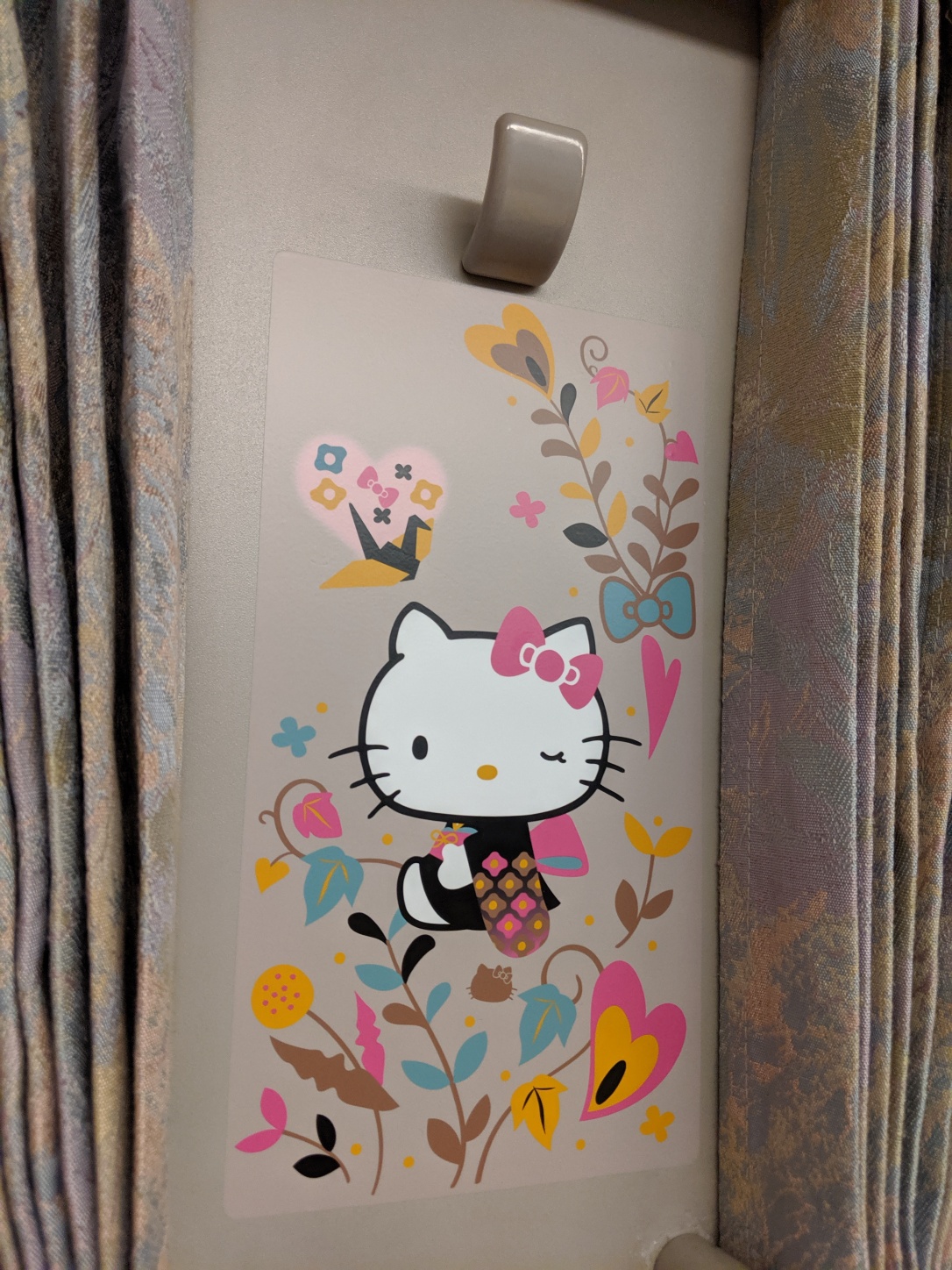 The ride was pleasant and ended at Kyoto Train Station. The station was really big and chaotic, but in an odd way also orderly. Everyone lines up orderly for the escalator (stand on the left there). For just normal walking direction through the station it wasn’t ‘walk on the left’, though. It sort of felt like people were walking in one direction on each side, and the opposite direction through the middle. It was also clean.

We figured out how to get to the exit we needed, which is very important so you don’t end up doing a lot of extra walking, then pulled our luggage about two blocks to our hotel — Sakura Terrace – The Gallery. There were two different buildings. We had to wait a bit to check in, and once we checked in it took a while to go through all the hotel information and restaurant reservations, etc.. I think the man checking us in may have been new. He spoke English well and he was a little bit sarcastic (which anyone who knows us knows that’s totally fine!). One nice thing is that there was always coffee and fruit water available for free there, and each night there was live music and you got a free drink of choice.  Our room was small, as expected, and we had a space age toilet.

We unpacked then made our way back to the train station to find dinner. I had read there was a convey belt sushi place, so after getting slightly lost, we found it and sat on the bench outside, waiting our turn. Most of these restaurants you sit or stand outside and move on down the line as people are seated. It was an efficient way to do it.

If you’ve never heard of conveyor belt sushi, basically you sit in front of a conveyor belt that has plates of sushi rotating on it. The chefs are surrounded by the conveyor belt and stand in the middle and add the sushi as it’s made. Each plate has a corresponding price to it depending on the color and they charge you by counting plates. Sal was in sushi heaven and ate almost twice as much as I did. He was a happy fella to finally have sushi in Japan!

After a full meal we meandered back to the hotel, with a stop at 7-11 for some drinks for the next morning. We would end up eating 7-11 breakfast every day, which is cheap and a common thing for both tourists and locals alike. We got back to the hotel and had our free drink and listened to the music a bit, then made our way back to the hotel to bed.