No sleeping in today as we had to our transfer to Da Lat. We had our breakfast, finished packing, then checked out. It was bittersweet saying goodbye for good to the La Selva staff.  Hopefully some day we will be back. I gave them some small gifts from NYC as a thank you. They gave us a gift of some Vietnamese coffee and the strainer they use to drip the coffee. Our transfer was right on time and we were at the airport sooner than we expected. Pretty soon we were checked in and through security. The only noteworthy thing seen was this in the bathroom:

We were flying JetStar this time, and we were the only Westerners on the plane. That was a first. We got in the bus that takes us to the plane and people were quite pushy and really didn’t care about personal space. Oh well. I’m sort of used to it at this point. I just shove back when shoved, and I’m bigger, so it usually stops 😉

We landed in Da Lat in less than two hours, and got a taxi very easily and cheaply. It was $7.50 for a 45 minute drive. Not bad at all. Our hotel for the next four nights was Dreams Hotel. We checked in and luckily our room was ready. It’s a basic room, but the bathroom and shower are separate, so it gets a lot of points for that! The owner was also very friendly and spoke great English.

We unpacked some things and settled in a bit, then decided to go to a cafe. Now Da Lat is known for coffee and cafes. I had done a little research and marked some on my customized maps I make of each city. I followed Sal and before I knew it we were going up this alley and a bunch of steps again. I read that Da Lat is hilly, but this was like an alley and when I looked at my map it showed a main road. Come to find out Sal wasn’t looking at my map, but at Google Maps in general and there are several Windmill’s Cafes in the city. We were already up all those stairs so I thought we should try to find a cafe nearby instead. We ended up at a nice place with friendly staff. One interesting thing is they give you tea before you order. I don’t get it, but I appreciate it. They did this at almost every cafe we went to in Da Lat. 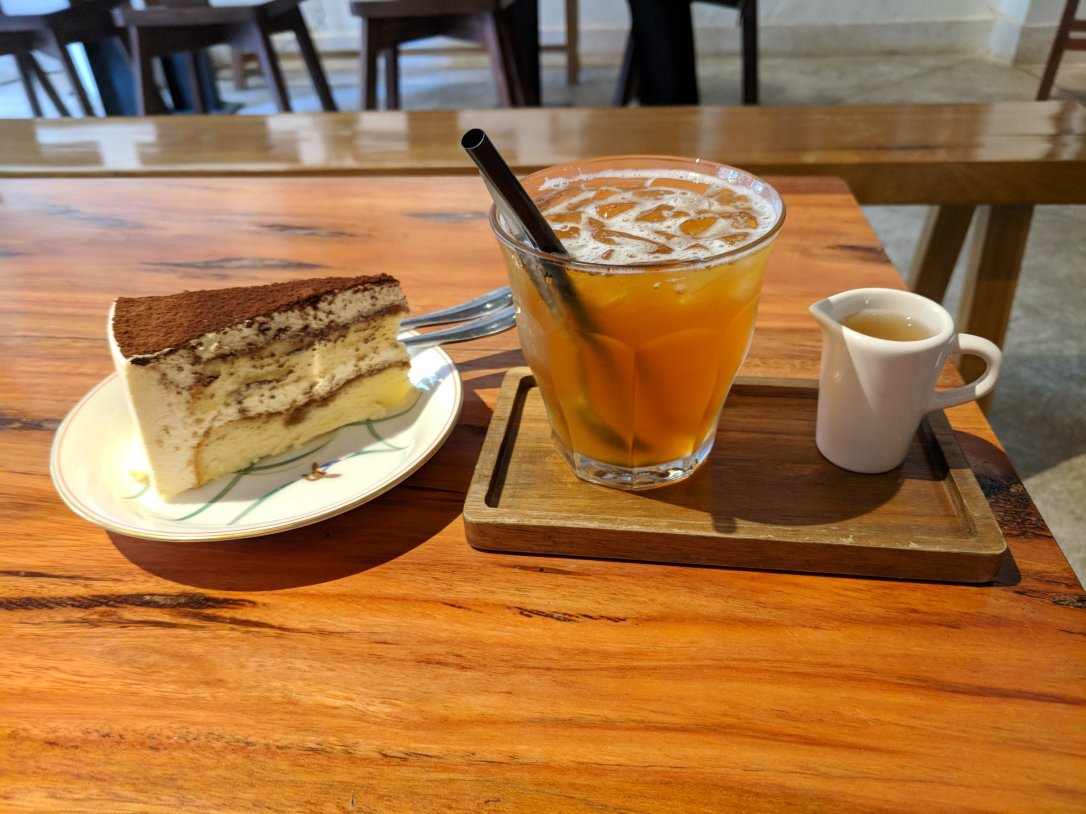 We hung out for a bit enjoying having decent WiFi for once, and I uploaded a bunch of videos and pics for this blog.

I had noted on my map a bar that was supposed to be kooky that we needed to try to get to, so Sal led us to the bar. Or tried to. Oh my goodness. We got lost, lost, lost. We were in the hills up on these alley roads that nobody sees unless they live there, and aren’t wide enough for cars. At one point we came to a dead end where some children were and they yelled, HELLO! We said hello back and tried to talk to their parent to get an idea of where we were, but he didn’t speak English. Some of the people gave us a little side eye, and I don’t blame them. We were in their neighborhood and we really didn’t belong there. 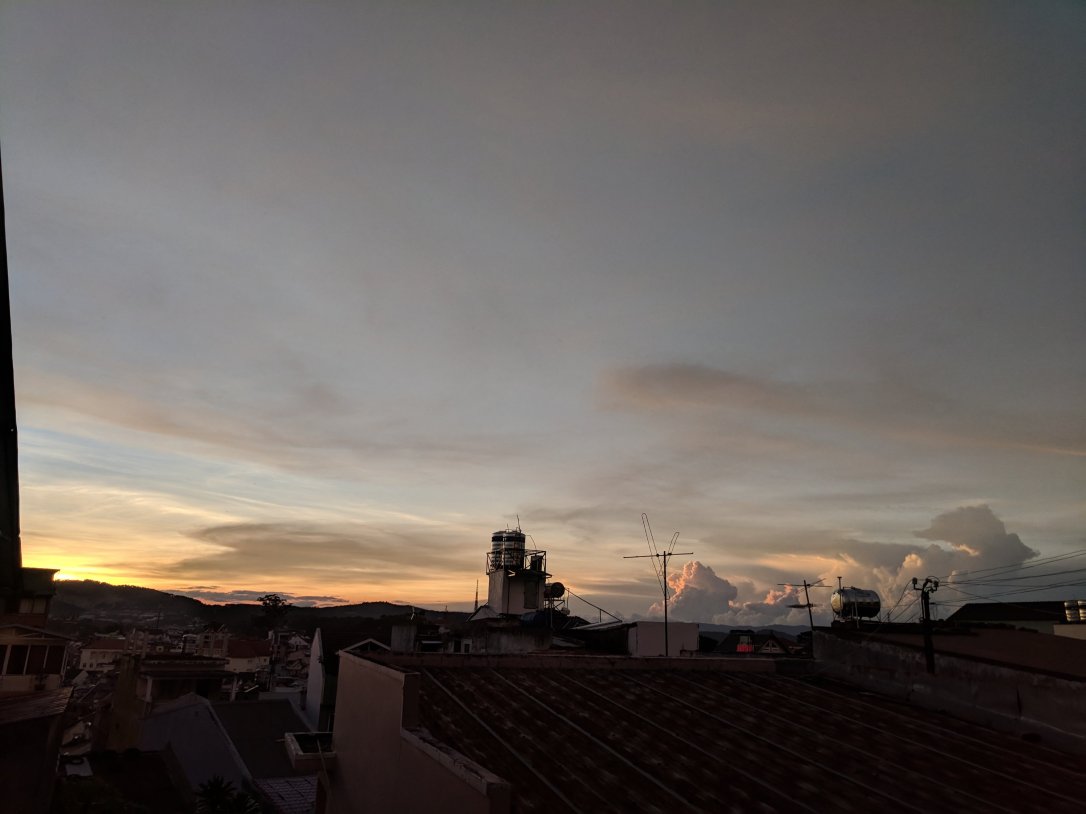 It was getting dark and I didn’t especially want to be lost in the middle of nowhere in a strange country, so we retraced our steps and tried to find our way back to the main road. At one point a motorbike rode by and I thought the driver yelled, “Go Away”. Sal thinks there was a dead end the way we were going, and he was warning us. Eventually we found our way back to the main road and we agreed we would never do that alleyway thing again and we would always take the main streets.

The bar, come to find out, was not far at all from where we had our coffee/tea. On the same road, I think. Good grief. We finally made it there, and it was the strangest bar we’ve ever been to. There were all these tunnels and (of course) stairs. It’s hard to describe it because someone must of been on some drugs when they designed it. I think it would be easy to get lost in there. So many corners and odd things. 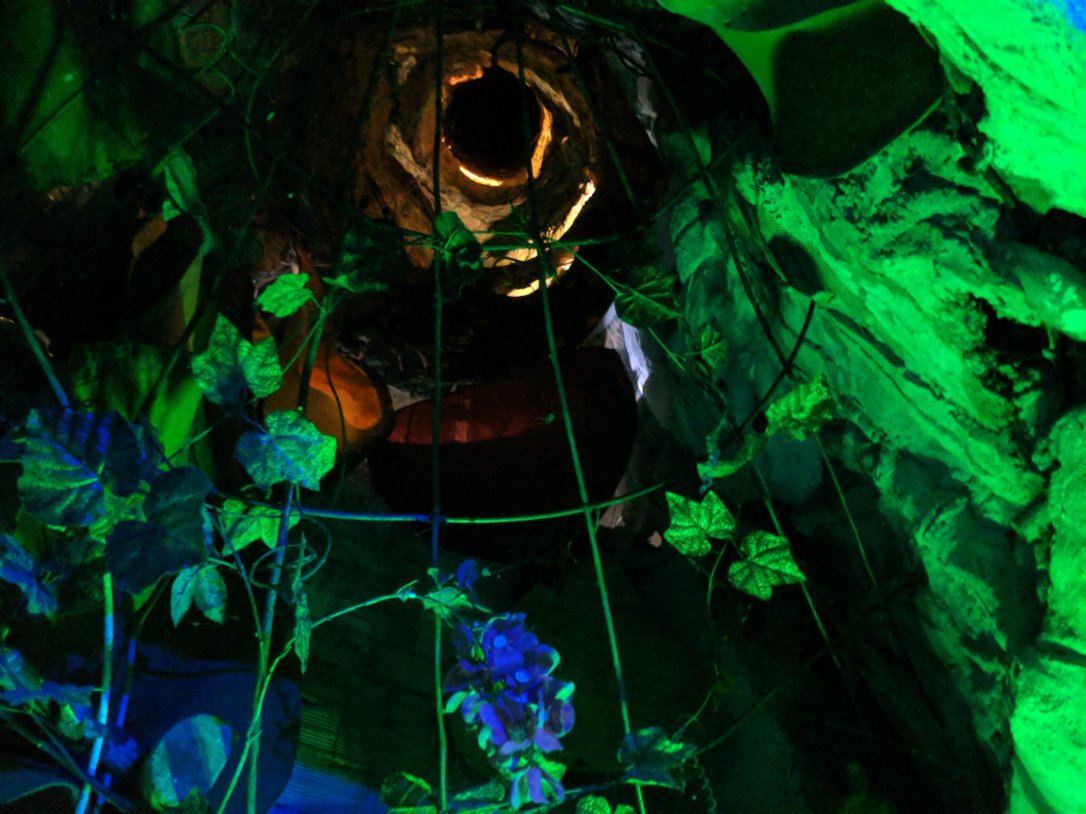 We finally made it up to the roof and fresh air and other people! We had a nice chat with an Australian couple.

We enjoyed drinks on the little roof and watched Da Lat below. It was very pleasant and the weather was about perfect. We started getting hungry, so we wandered a little more, then found our way out and made our way to dinner. We did go down an alley at one point, though, and I said, “hey, I thought we weren’t doing this anymore???”.

We got to the restaurant easily enough and place our order. Our food took a while, but it was really good. Especially the fish in the clay pot. Yum! 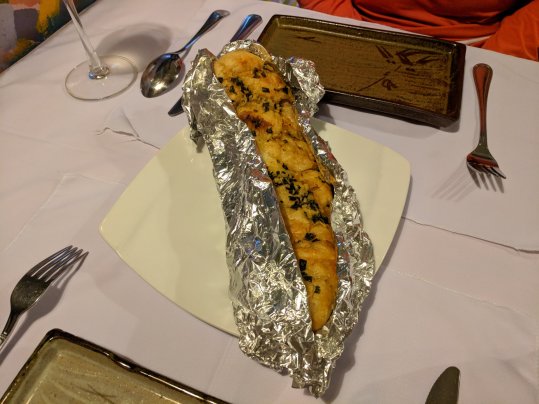 We found our way back to our hotel and slept pretty well. Our room faces the street, so there is noise, but it’s nothing like the honking in Hanoi.