This post is going to be extremely short, because all we did was walk around, eat, and drink. That’s it. Sometimes that’s all you need to have a good day, frankly.

We started with a good breakfast, per normal, at Dreams hotel. Then we relaxed in the room a bit before going out to find some lunch. I just wanted something Western. While I’ve liked 95% of what I’ve had on this trip, sometimes you just want something familiar. And without rice or noodles. I opted for pizza. Sal indulged me. I love Sal.

The pizza place was three stories up and we were the only ones there, which made me wonder a bit. Our waitress spoke excellent English, with a bit of a British accent. We were very impressed! She said she’d never been out of the country. She asked where we were from and when we told her she said, “Broadway! It’s my dream to go there!”. It was really cute and surprising. She also talked about Christmas and wanting to see snow some day. Honestly, if I could have bought her a ticket to NYC right then and there I might have. The pizza was extremely yummy. Sal had a bit of trouble eating the crust because of his tooth. He still didn’t want to go to the dentist, though. Oh, Sal. 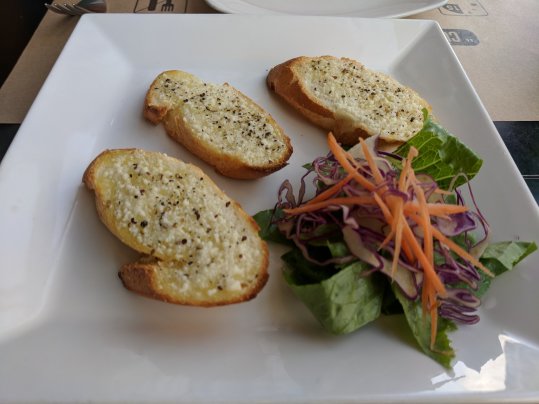 Apparently the reason that the place was empty was because they were getting ready to close. We had no idea! So we gulped down our drinks and headed out after goodbyes to our new young friend. We didn’t have anything on the agenda for the day as the next day would be a full tour.

Here’s a shock: after lunch we ended up at another Cafe. We sat there for a while watching the Prudential company employees filming a video across the street, complete with dance moves and multiple songs. It was pretty funny. They practiced several times to the point where we learned some of the actual songs. And one wasn’t in English. Sadly no video of this. Curses.

Nothing else particularly noted for the day except dinner: we went to another bbq-your-own place. My legs couldn’t fit under the short table. We bought the best beef (I hope it was beef) and it was pretty chewy, luckily the waiter suggested the pork belly as well and it was more like thin cut bacon and it was delicious.

This was the first place to give us beer in a mug, with a long cube of ice. When in Rome. This was also the place where we saw small cockroaches. On our table. While we were cooking. Honestly I expected this weeks ago, so it was a good run of ‘clean’ places. The less said about it the better… No pics. You’re Welcome!