These posts are about a week and a few days old as we had very little and slow WiFi in Indonesia.

On our transfer day between Ubud and Sanur, we decided to stop at the Sacred Monkey Forest Sanctuary.  I suspected after a monkey incident last time we were in Thailand that maybe monkeys just weren’t my thing and I was a big chicken around them, and it proved to be true at the sanctuary.

On the ride to the sanctuary the driver talked about things the monkey’s steal. I had read about most of them (food, hanging items, etc.), so wasn’t surprised until he mentioned glasses. Of course it made me paranoid that the rascals would steal my new specs and run around looking like Sally Jessy Raphael or something. I mean, I have an extra pair of glasses, but still. My fears (well that one at least) were put to rest when the person at the ticket booth answered, “no” after I asked about it. I’m 84% sure she understood the question.

There were a bunch of people and monkeys at the entrance. You could buy bananas and feed them. This insane lady shared a bottle of water with one.

There’s a sign that, in pictures, telling you the monkey rules. The first image shows you shouldn’t make eye contact. Salajander went right up to the troublemakers and started to take pics right in their faces while one was getting groomed. I pointed out the sign. His response, “I wasn’t staring!”. Clearly one of us is more paranoid (and possibly smarter) about the monkeys.

There’s a sign that, in pictures, tells you what not to do. The first image shows you shouldn’t make eye contact. Salajander went right up to the troublemakers and started to take pics right in their faces while one was getting groomed. I pointed out the sign. His response, “I wasn’t staring!”. Clearly one of us is more paranoid (and possibly smarter) about the monkeys.

We saw a man sitting on a rock with one monkey on his shoulder, semi content eating something, while another tried to steal his raincoat. Why monkey, why? Because monkeys are jerks. And P.S. I saw that ‘semi content’ monkey give the dude a little bite on the shoulder after he was done eating. All I could think about was the potential shots that guy had in store if the bite broke skin… 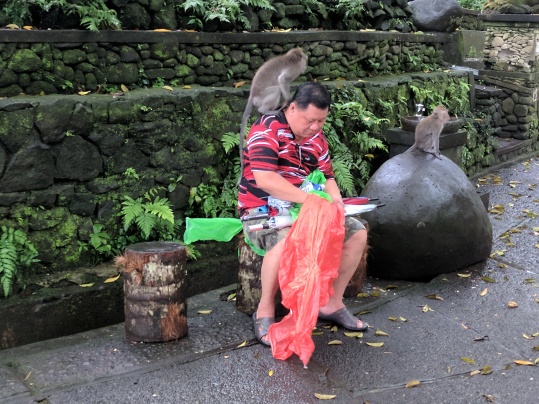 My strategy was to be behind someone and use them as a human shield. In the event that there wasn’t an available shield, I would walk very, very quickly. Needless to say the visit to sanctuary was a quick one, but here are a few more pictures. 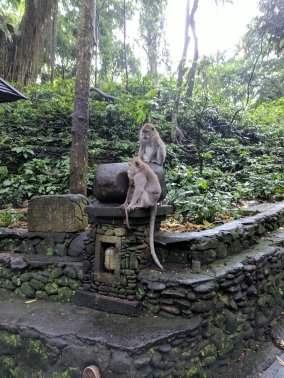 We went straight from there to Sanur. Our guesthouse was down a few little alley ways and very small. This was the second least expensive room for this trip. It was so small I had to take this pic from outside. 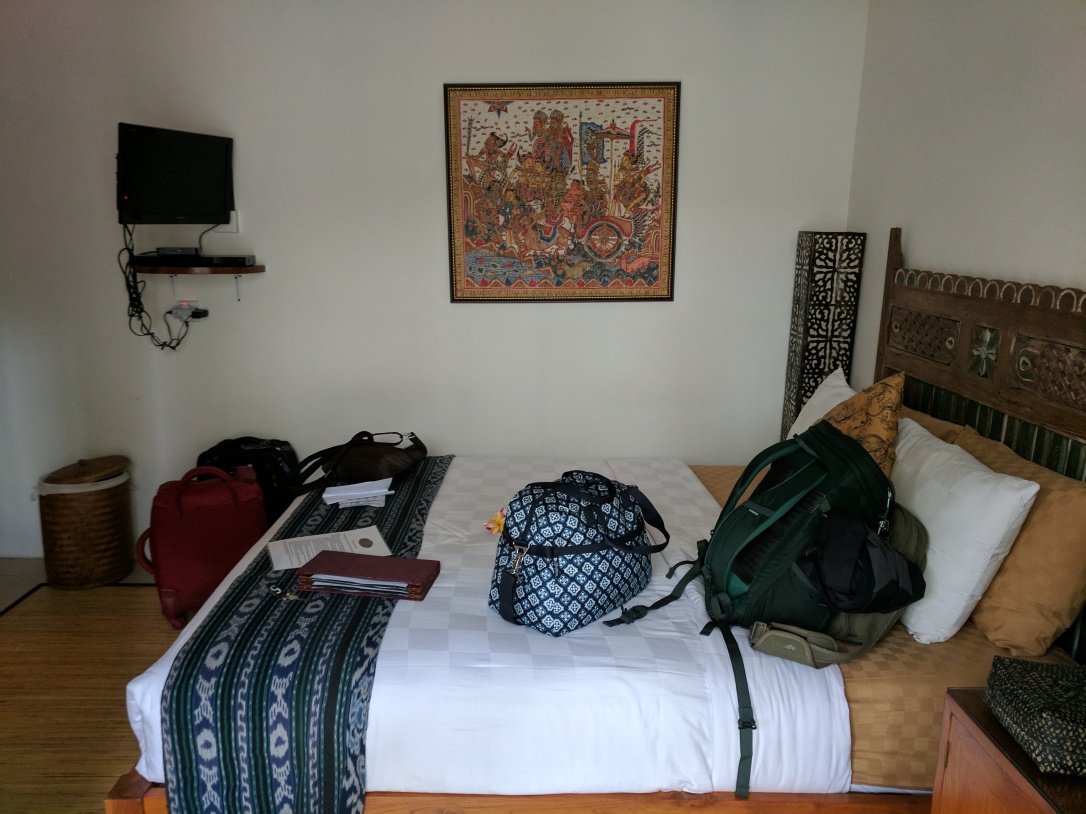 The room was fine. It was clean and there was air conditioning. The thing that is hard to get used to in some of the hotel room bathrooms in this part of the world is the toilet/shower combos where you can poop and shower at the same time.

It’s just gross walking into the bathroom on a wet floor. Major ick factor for me.

We couldn’t decide what we wanted to do, so eventually decided we’d try to find the beach, which was supposed to be about 10 minutes away. We barely got ¼ of a block down the road and I slipped in a puddle. While I didn’t fall down, I did manage to splatter mud all over my capris. Off we went, back to the hotel, for a rinse off and to change. I took that slip as a bad sign, and decided that we should go back to plan A, releasing a baby turtle.

After a taksi (that’s how they spell it here) ride where we paid some apparently random tourist parking fee even though he was just dropping us off. Tourists: 0 Scammers: 1. We eventually got to the facility for the turtle conservation and education center. We paid our 150K (about $11 USD), picked out the ‘liveliest one’ we saw, per instructions. Here’s a little video Sal made of me picking the little guy out. We then rode in a hot van for about 10 minutes to get to where we would release the little bebe. We named him Malcolm Jr, after our godson who loves turtles. They spelled it Maalcolm for some reason, which I didn’t notice until this blog post. Sorta funny. 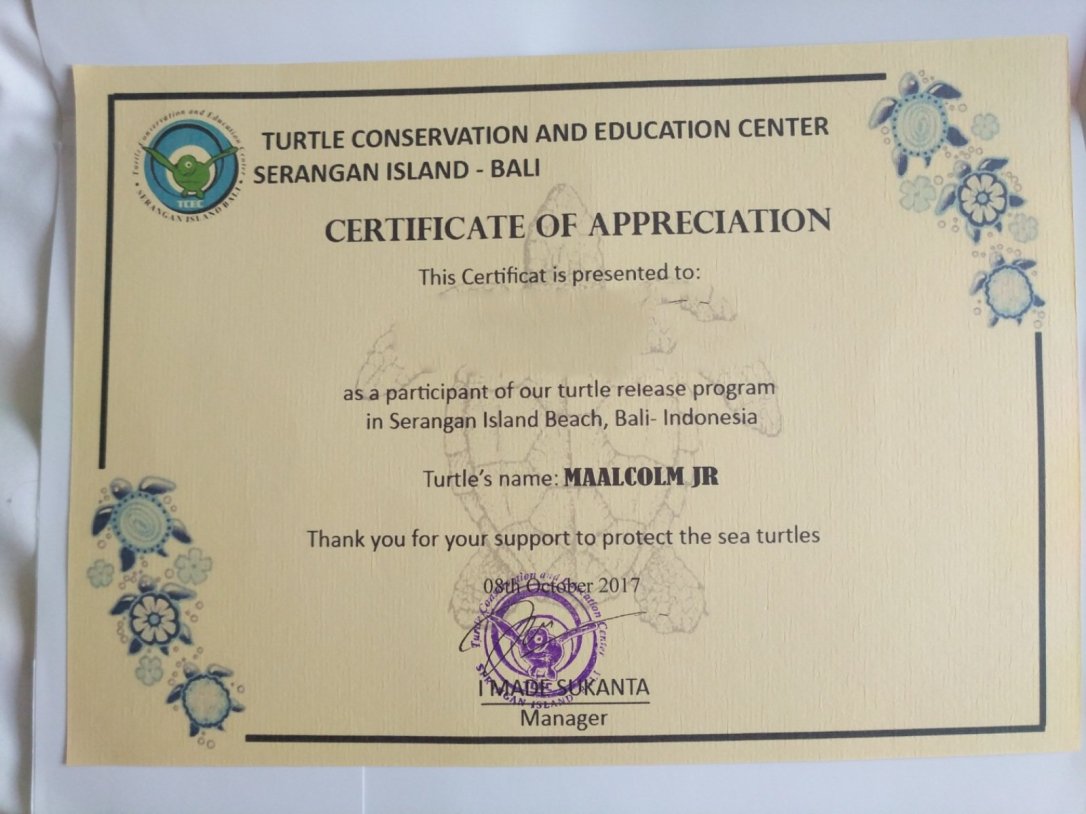 There were four of us on this adventure, us and another couple from Switzerland. The couple released their turtle first, and their little one swam away like a trooper. I released Malcolm Jr. on the sand and he had just laid there, not moving, like he decided now was a good time for a nap or worse. Per instructions from the guide, I then picked him up and put him in the water’s edge. He only used his fins a tiny bit, and that was basically to head back to the shore. Malcolm Jr. was not a fan of the big drink. By the fourth try the guide had to actually wade in to deeper water to release him. At first it looked like he was aiming again for the sand, but he finally got it together and went off to sea. We think. Let’s just go with that.

After the ride back to the facility and getting our official certificate, we were approached by a man who said there was a taksi association that served this area only. At first we weren’t sure what was going on, but when he tried to charge the four of us four times the amount it took to get there, we knew it was scam #2! I found our guide and asked for help and he was no help at all and told us to talk to the girls in the information booth. I asked the girl about getting a Bluebird taksi and she said they could drop off there, but not pick up. I’m not sure if that was a scam or not. I asked the girl if an Uber would be ok and she said, “That’s up to you”. I didn’t know what that meant. I’d read mixed things about Ubers, and saw the no Ubers signs in Ubud, but we took our chances and the price ended up being less than what it cost to go there to begin with. The Uber driver didn’t speak English, but we figured out two stops easily enough.

We decided we wanted to have fish on the beach, and stopped at Jack Fish, which was quite tasty. One of the things about beaches in SE Asia is getting used to the tides and how different they look during low tide compared to high. 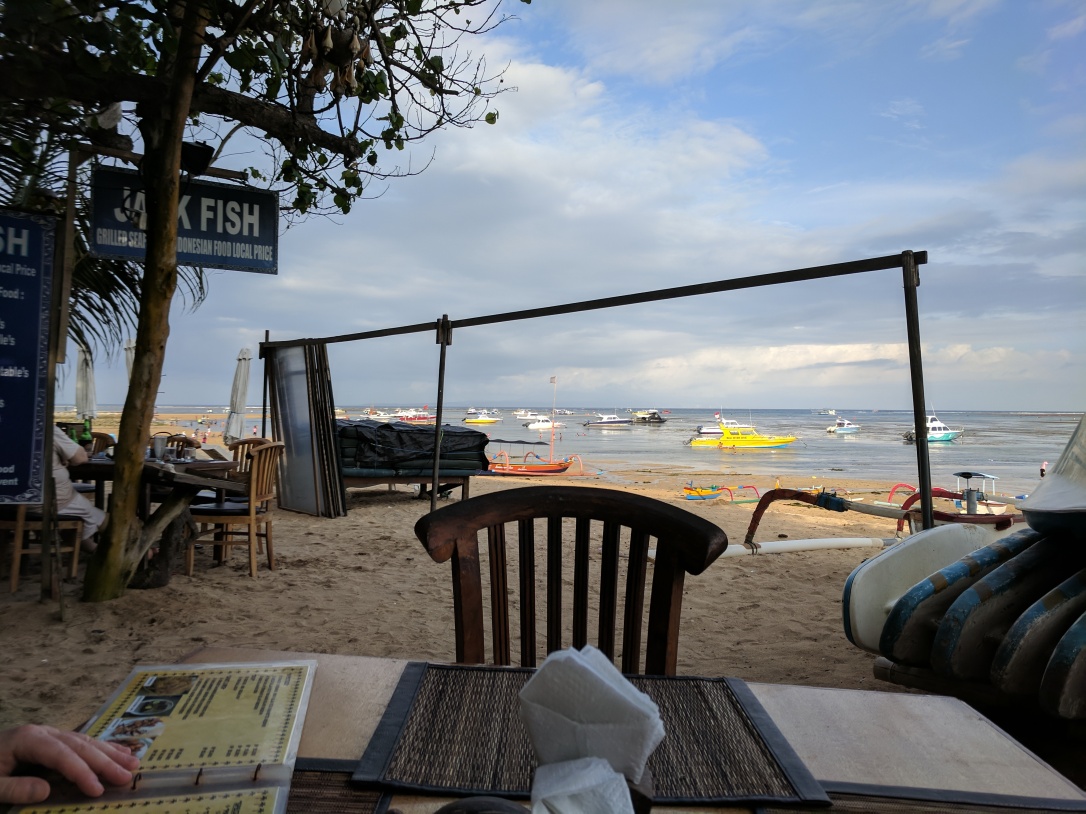 The little outdoor restaurant had about 20 bird cages with various birds, and one pooped on Salajander’s shoulder, which is supposedly supposed to be good luck. I guess we were just lucky it didn’t hit his food.

We walked back to the room and called it a night. I only got to spend about a half day there, but in my brief time in Sanur I thought it was OK. I just definitely preferred Ubud.