The day started with me not feeling well. I’m the only one I know who goes to a foreign country and gets sick from the Western food. While I was trying to rest up and let the medicine take effect, Sal had to go back to the FS to get his stomach medicine. We laid low once he got back, until I seemed better and it was time to put something back into my stomach.  TMI. Sorry.

We decided to just eat at one of the hotel restaurants. I had chicken rice for the first time, which is one of the dishes Singapore is known for. It was OK. When it’s something even *I* could make that’s not all that impressive to me, because when it comes to culinary skills I am severely lacking.

We walked from the restaurant to Gardens By The Bay. I had again saved a few bucks with Klook and it couldn’t have been easier. Our admission got us into both the cloud forest and the flower dome. We started out at the flower dome, where we rented an audio guide. This was the first place that I had to 1) actually sign a form to get an audio guide, and 2) fill in my hotel/room and agree to pay if the guide was damaged or lost and, 3) give id for them to hold. Clearly they take their audio guides very seriously in Singapore!

The flower dome had a few different themes: Alice in Wonderland (for the succulents) and Cinderella (for the gourds display). The tiny flowers from the various trees/plants were my favorites, and I took a ton of pictures of them. 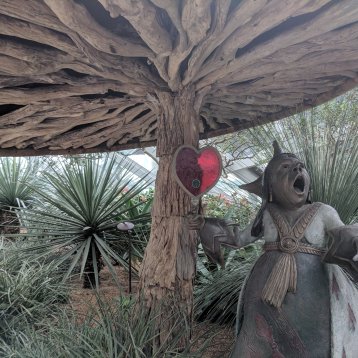 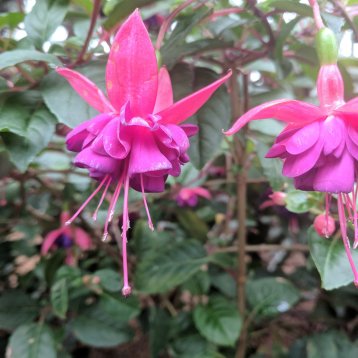 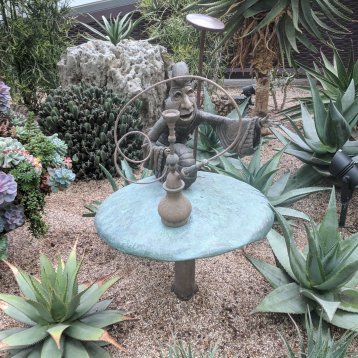 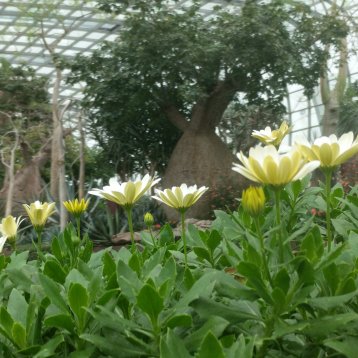 Here’s a video showing one part of the gourd display. 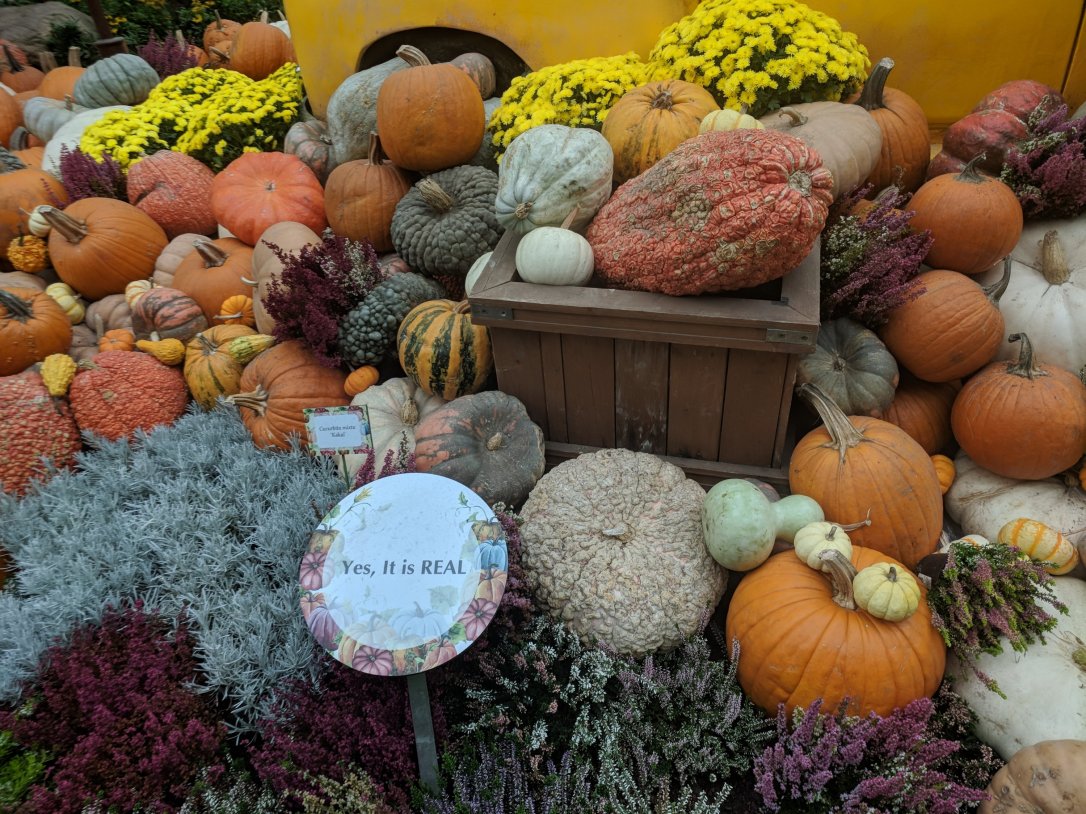 And I don’t know what this guy was doing, but it was scary even watching him. 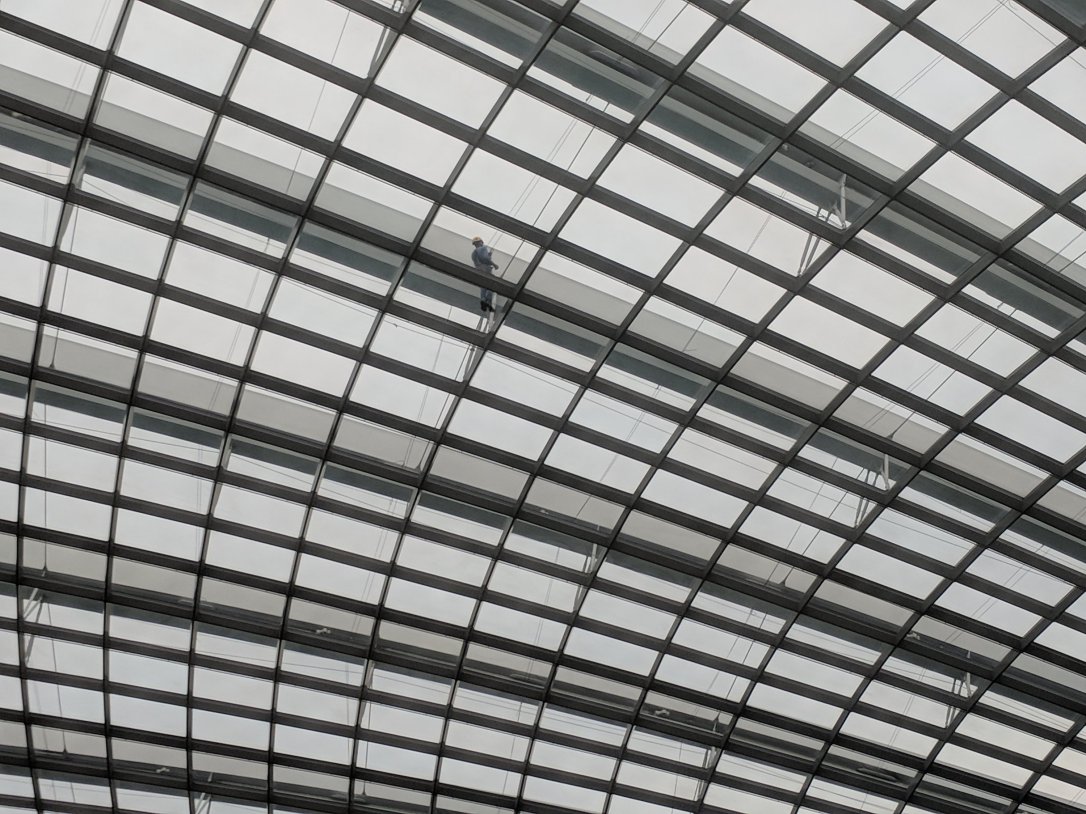 After finishing the flower dome we went on to the cloud forest. The cloud forest is mostly known for this gigantic indoor waterfall.

There are flowers there, as well, of course. 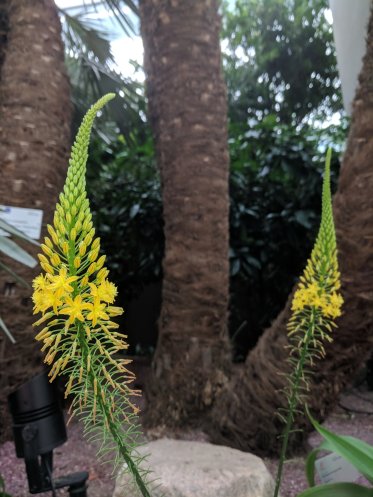 Once you have viewed the lower level you take an elevator to the top of the waterfall. I believe it’s called the cloud walk. Now I’m afraid of heights, and this was high up. Sal encouraged me to do it, and I did it, however I couldn’t even get a picture on the highest walk because I couldn’t stop walking due to nerves. I did get a pic on the lower walk, which was a lot less scary and I felt pretty safe, until I’d feel it moving a little. The very slight movement made me very scared!

There is also an area about ½ way down where you can stand out and get a picture in the air with the waterfall. Sal talked me into walking out it, even though I was quite nervous being high up and next to the waterfall. We had just gotten ourselves into position to take a pic, and a woman barged out and stood in front of us, saying “excuse me! Just one moment!” and started taking her own pics of a couple that was on the other side of the watefall. Sal said, “We were going to take a picture!”. She couldn’t have cared less. She kept on taking her photos and even moved back into Sal, after we moved the first time, basically making him have to move again. It was so incredibly rude. I think it really upset me even more than normal because I was already scared being out there in the first place and then to have someone bumping into you and basically shoving. Not cool. Felt unsafe.

We finished up with the Cloud Forest pretty quickly after that, as there wasn’t a lot left to see and I had had it with those tourists and just wanted to get out of there. One thing I’d read was to make sure to go to the Supertree Grove during the daylight, and then for the night show. I had seen a *very high* walkway between the trees, from a distance. This is what it looked like up close. I never imagined I would actually walk it, though. After doing the indoor one though, I think I had a little more confidence. I asked one of the men working there to tell me how scary it was. He just laughed and said it wasn’t, and said that I had my ‘hero’ with me to help me, pointing out Sal. I offered to stay on the ground and take pics of Sal up in the trees, but he wasn’t interested in that. He wanted to go with me. Well, great. Then I felt like I had to do it so he wouldn’t miss out. We bought the tickets and at the beginning of the experience I saw this sign: 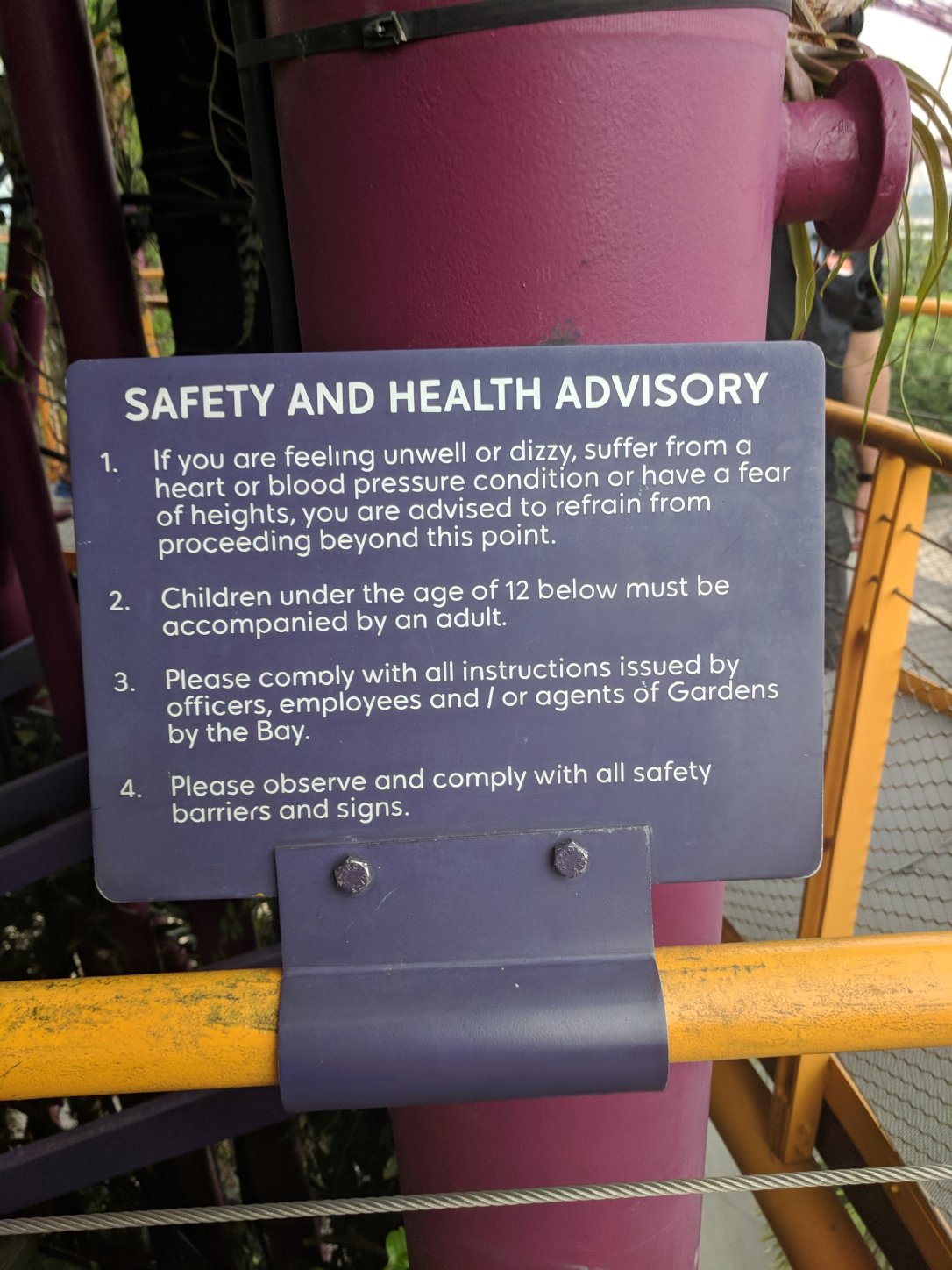 And that is when I knew Sal was trying to bump me off. 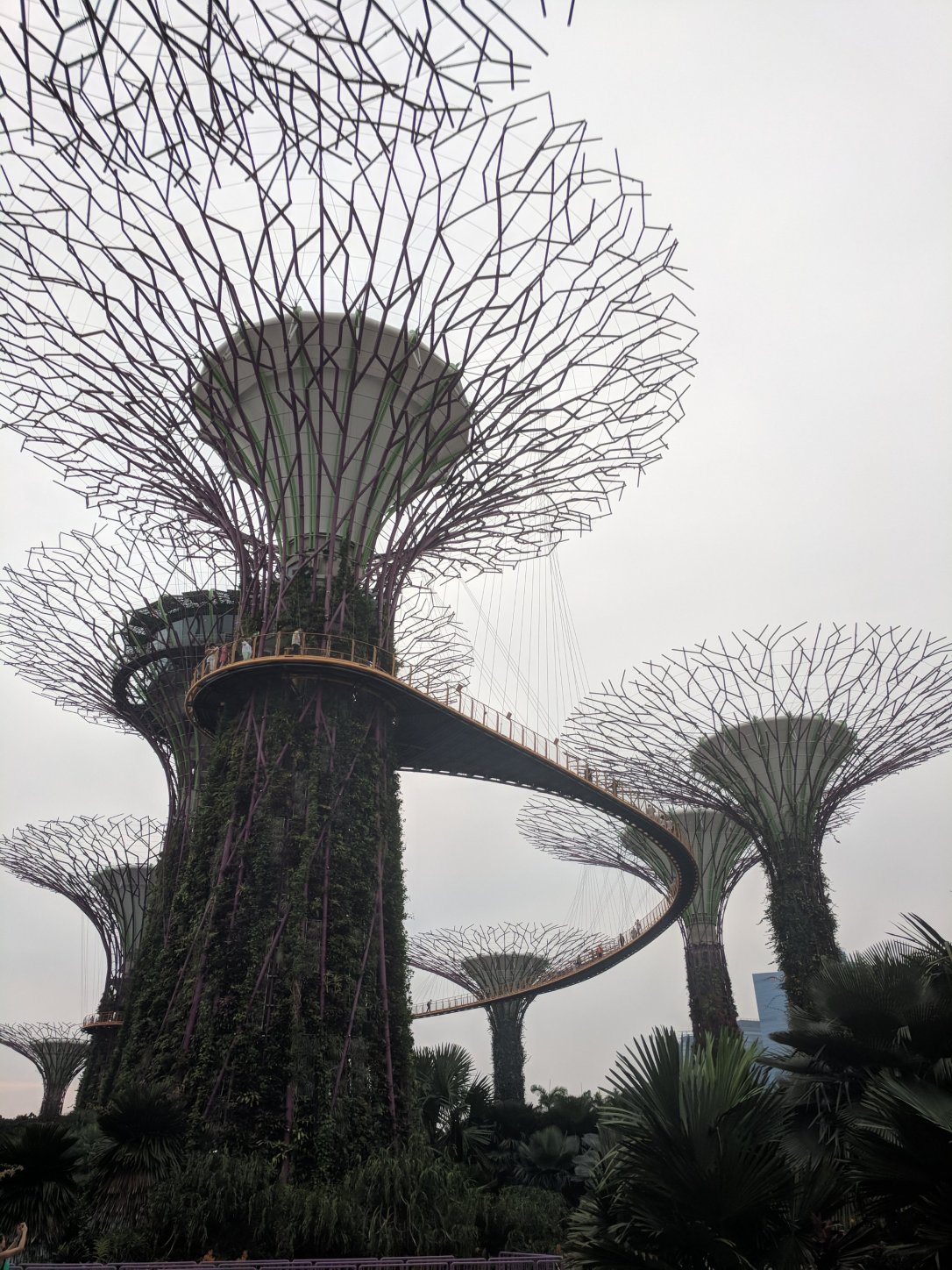 We got to the top and it wasn’t horrible when you’re right at the big circular part at either end, but when you get to the actual walkway…well. There was this big family causing a bottleneck taking pics, which meant standing there waiting and getting more nervous. We eventually excused ourselves so we could get by and get the walk over with. And by we I meant me. I was walking at a good clip, until I ran into someone coming the wrong way back. I said, “Why are you doing this to me??”. Hahaha. Luckily I don’t think they spoke English. Sal tried to take some pics, but I was trucking along quite a bit and couldn’t stop and turn around. I advised him to just take one of my back.

After that we picked up some happy hour beers. If anyone needed a beer at that point, it was me. I’m telling you, that supertree sky walk freaked me out. Especially when I could feel it moving. When Sal pointed out the steel cables holding the thing up, he thought it would comfort me and it made me even more nervous. Do’h!

Not too long after it was getting dark and the trees were lighting up. They have a light show with the trees every night, so we stuck around and watched it and it was great. It was like the tree version of the fountains at the Bellagio hotel. Sal took this video

I truly enjoyed it. People were up on the sky walk during it and I don’t know if I would have been more scared or not in the dark. Maybe the lights would have distracted me.

After the show we headed back to the Marina area to see the water show they have, but I must have gotten the times wrong because it was already going by the time we got there. We watched a bit from the roof. I still preferred the tree show as it had better music and was more different than anything I’d seen.

We got a nightcap on the top of our hotel, then called it a night.