We got up early and again picked up breakfast at the cafe in the hotel. Pretty tasty. Not cheap, but definitely yummy. Mr. Oat was waiting for us when we got to the lobby, and after saying our hellos we talked about what was in store for the day: the golden Buddha, the flower market, the golden mount (that was closed yesterday), and Jim Thompson’s House (that was also closed yesterday). We would be taking taxis or tuk tuks (yay!).

We were quite lucky because there was very little traffic and our cab got us to the golden Buddha quickly. It was while we were driving there and Mr. Oat was telling us the story I realized that something sounded familiar. Yep, we’d been there before. Pretty funny. It’s a 5.5 ton Buddha made of gold. There is another bronze Buddha that was also impressive. We didn’t have the heart to tell Mr. Oat after yesterday’s snafu, which he again apologized for. It really wasn’t his fault. 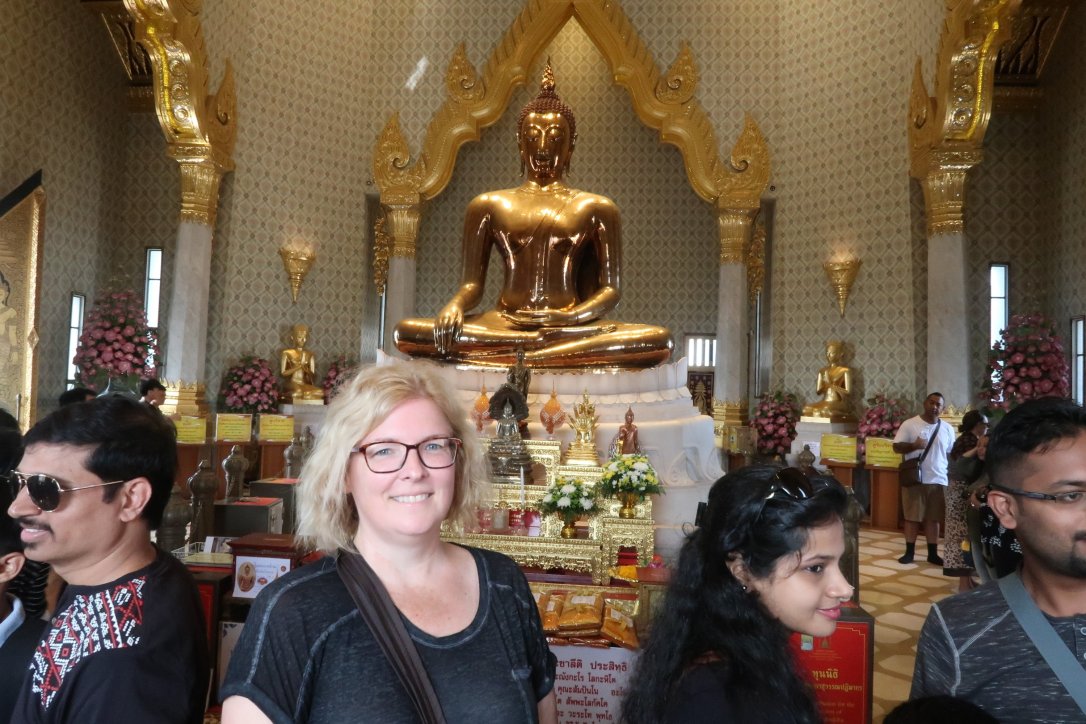 Our next stop was the flower market and the vegetable market, and we were going by tuk tuk. So much fun! We were zipping along and I was loving it. Here is a video I took of the first ride.

There were many flowers that had been out in honor of the late King and the cremation ceremonies. 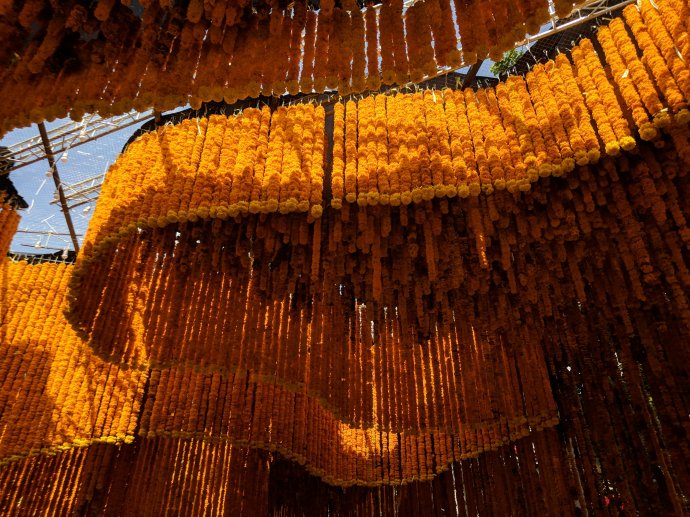 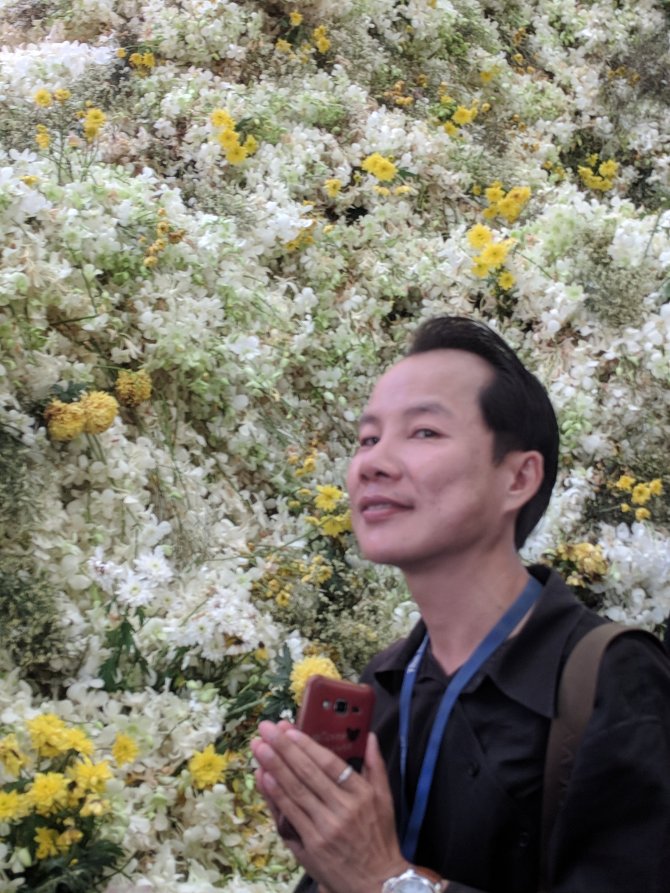 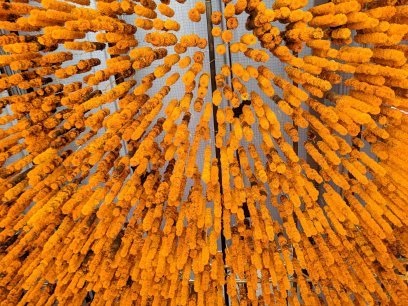 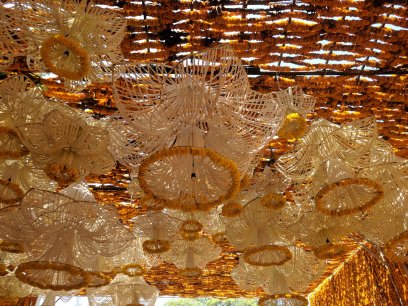 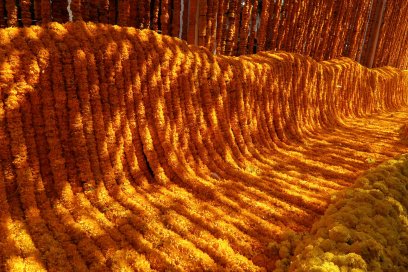 We then looked around at the flower and vegetable markets, which sort of in a big warehouse building. 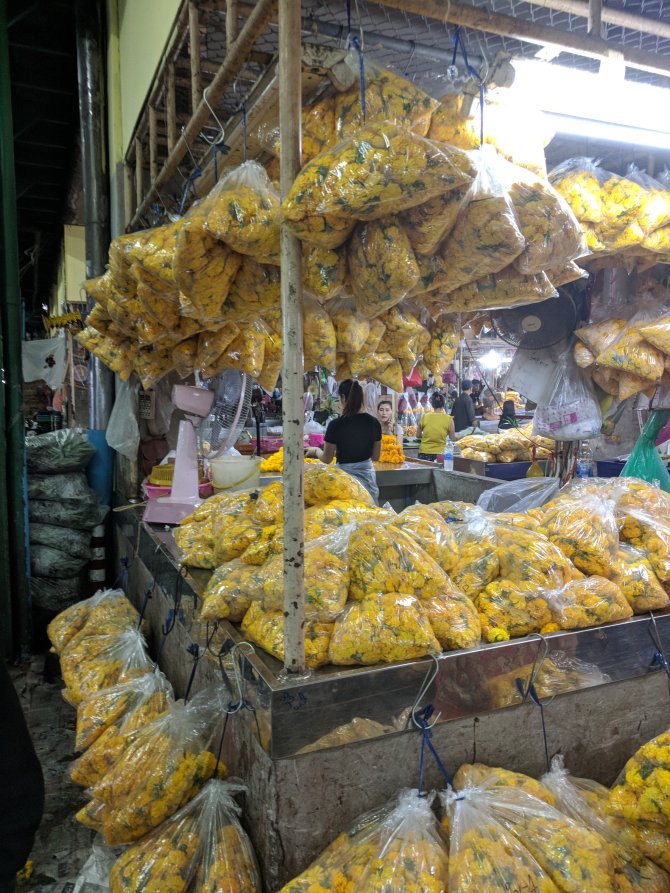 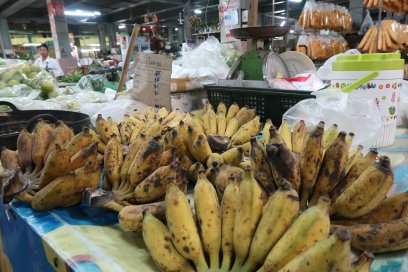 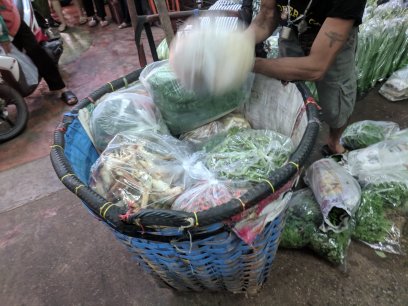 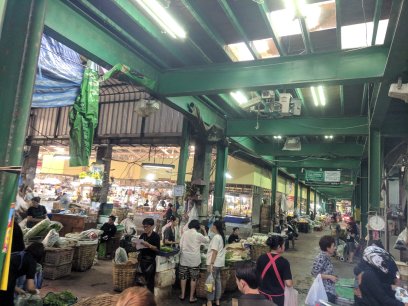 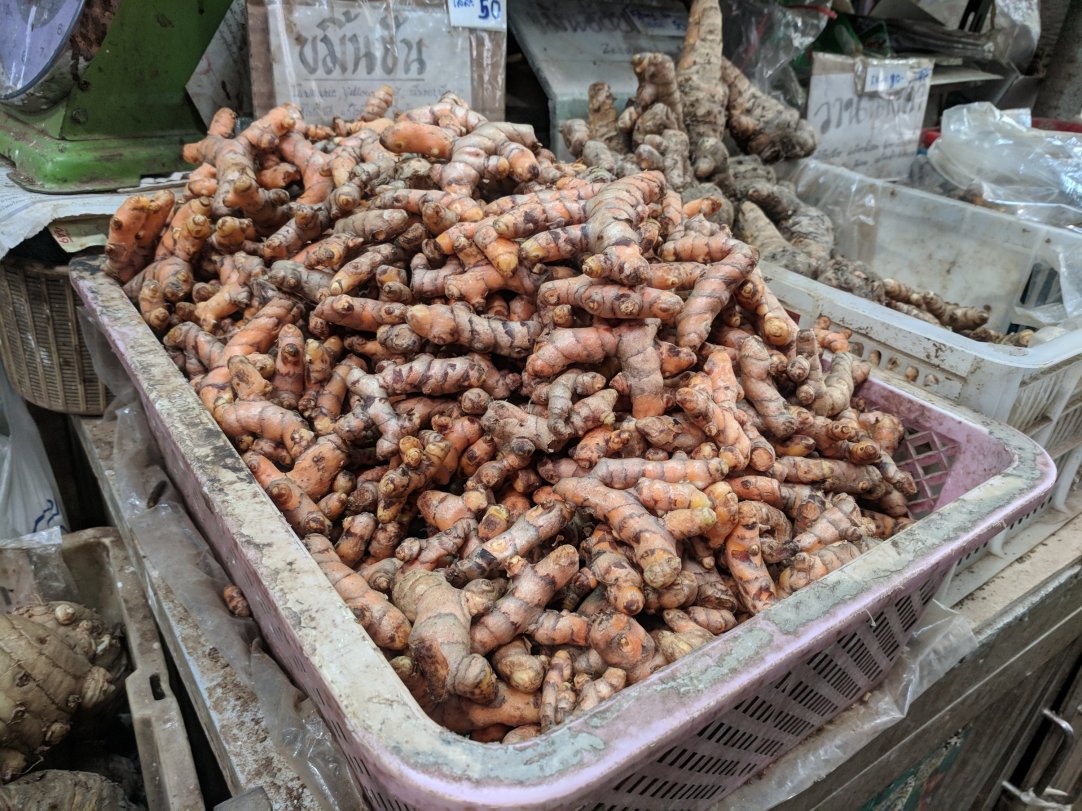 While we were walking around Mr. Oat bought us some delicious mango and sticky rice. The mango was perfectly ripe and oh so tasty. He also made sure to keep getting us waters, which is very much appreciated because it’s pretty much like Singapore here and hot as balls (sorry Mom). We also bought flowers in our lucky colors, which depend on the day you were born. I was born on a Monday, so my lucky number is 9 and color is yellow, like the late King. Mr. Oat’s lucky color is orange, and Sal’s is red. Who knew? 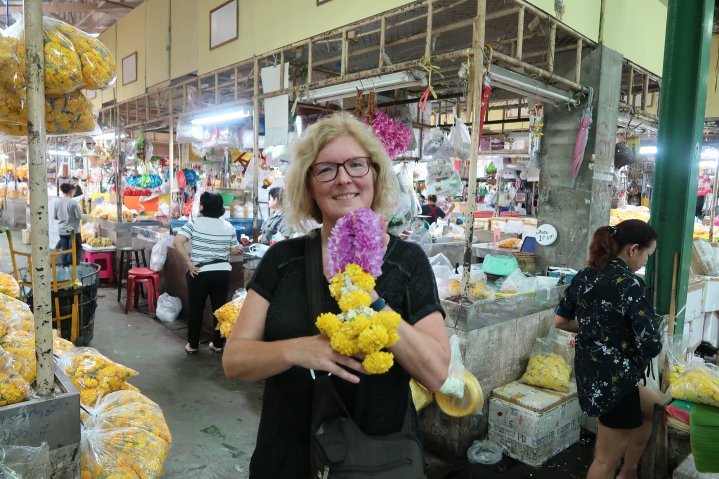 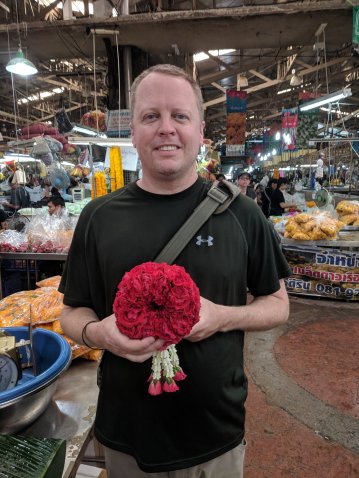 Thanks to no traffic we got through the first part of our itinerary quite quickly. We grabbed another tuk tuk and went back to the temple we tried to go to yesterday. This time it said it would open at noon. We went up about ½ way and rang the gong three times for good luck.

Our luck wasn’t that great, because the top half still wasn’t open to actually get to see the Buddha. We decided to go to the temple next door while we waited for the Golden Mount to open up. That temple was very nice and also considered a Royal temple. The temple had almost nobody else in it and felt quite peaceful. Mr. Oat showed us how to shake this can of sticks with numbers on them, then you take the paper that corresponds to that number that fell out of the can, and that is your fortune. Sal had a lucky one: 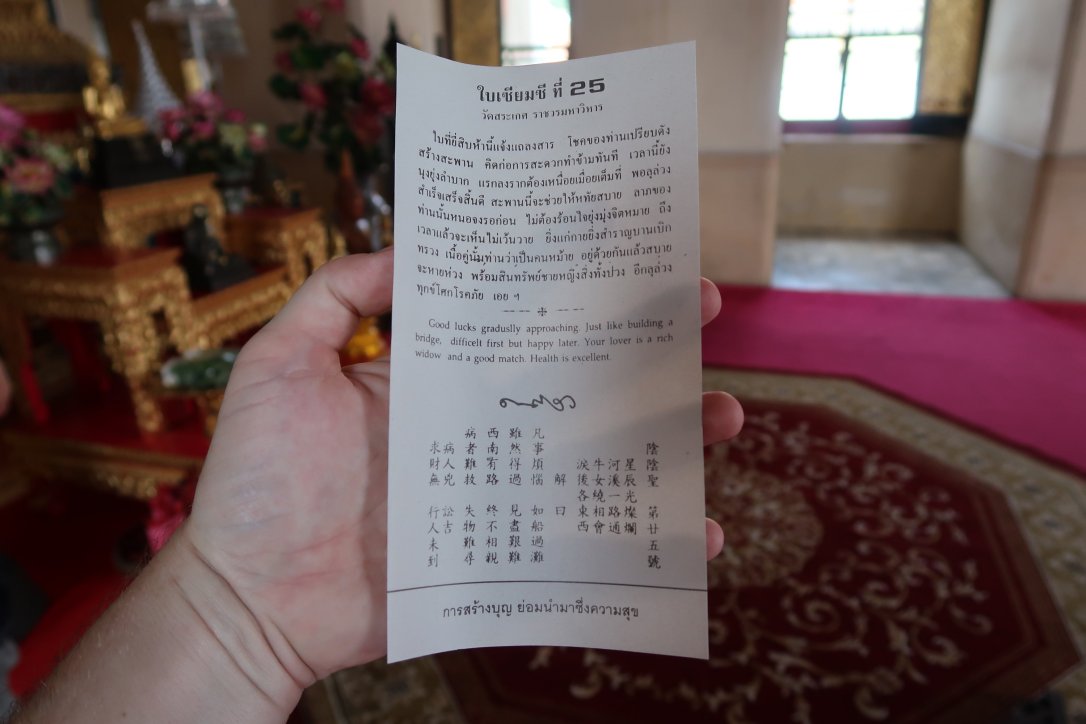 Mr. Oat’s was mediocre, and mine was unlucky. Needless to say I left the fortune there. Good thing I don’t believe in any of that! It was at this temple that Mr. Oat showed me how to give my flowers to my lucky Buddha, however it wasn’t that lucky because after that is when I got the negative fortune. Ha! 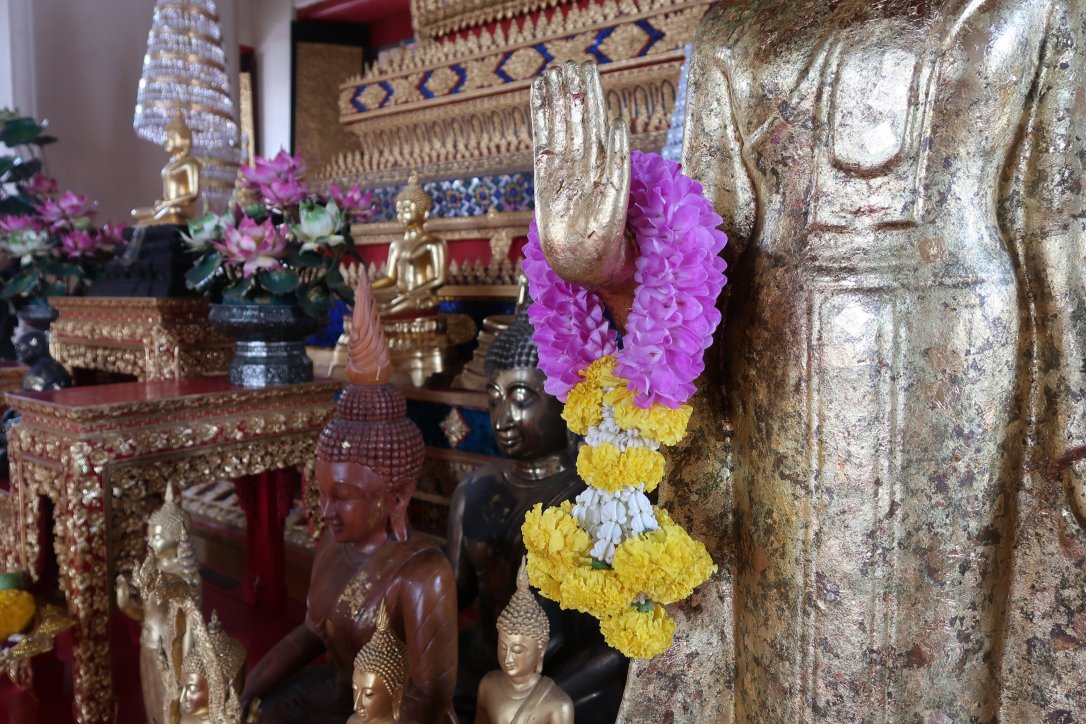 We saw some monks eating their lunch. Monks eat twice daily, and cannot eat after noon. They can have liquids then, but no food.

We made our way back again to the Mount to see that Buddha. Up the stairs we climbed, but again couldn’t go up all the way. We stopped at the cafe, as Mr. Oat knew the people who ran it and we were waiting to see if they would open the top in the near future. We had some iced teas and waited. Mr. Oat went and checked, but the top was still closed off. Seeing that Buddha was not meant to be for us. Three strikes and you’re out.

We did go from there to something not on the itinerary – the marble temple. 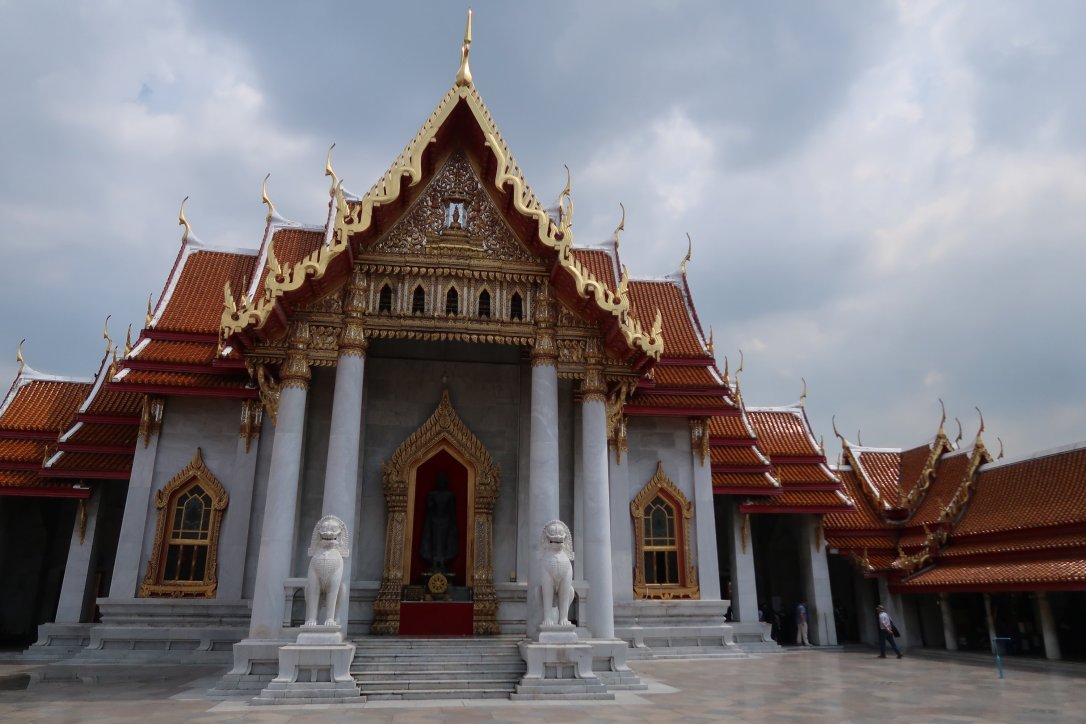 After a quick look around and Sal giving his flowers to his lucky Buddah, we grabbed a cab and went to Jim Thompson’s house. I have to be honest – by the time we got there I was already worn out. It was hot and I wasn’t all that interested in Jim Thompson. It seemed like a pretty big tourist trap, frankly. The prices were eye watering. We didn’t really care about hanging out there all that much. We were ready to call it a day.

Mr. Oat had us take a local bus next (about a 7 minute ride) for $0.12. He said, “you’ve done the boat, the tuk tuk, a cab…time for the bus!” Our destination was one of the mega malls. As I said yesterday, Sal suggested we buy a bigger suitcase (COUGH COUGH I LOVE SAL), so Mr. Oat took us to a store and we found an inexpensive bright orange one that will be impossible to lose. All we need is for it to hold up until we’re back in the US. Orange is Mr. Oats lucky color, so he suggested we get that one so we don’t forget him. How can anyone forget Mr. Oat? I have to say, walking around the markets and such, when he would run into someone he knows they would get this huge bright smile. Mr. Oat brings happiness wherever he goes, or maybe I’m biased.

We had lunch in the mall at a restaurant that Mr. Oat recommended, then headed back to the hotel. A cold shower was in order. Lordy, the amount we are sweating… Anyway, we relaxed for a while, then eventually it was time to get ready for our dinner on the 57th floor of the nearby hotel Red Sky. We were going for the view, but dinner was actually quite delicious. 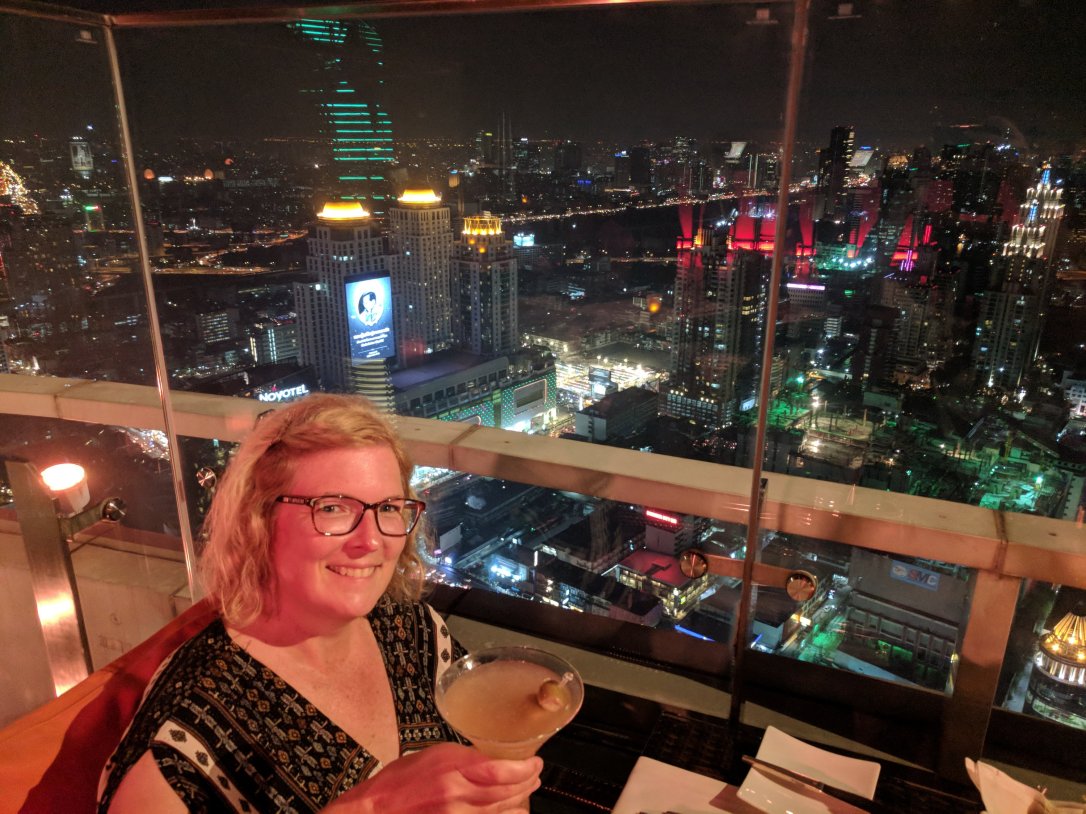 We walked back to the hotel and called it a night. Tomorrow is an early day. I don’t want to ruin the surprise of what we plan to do, but I’m guessing it will be the best Bangkok day. It will also be bittersweet, because it will be our last day with Mr. Oat.