Today we went to the only thing I’d planned in advance for our Singapore portion of the trip: Sunday Champagne Brunch at the Pan Pacific Hotel. Priorities.

The brunch was the longest in Singapore: 12-4. Apparently they are usually 2 hours long. Our reservation was at 12. We were in line when they were getting ready to open and about 10 waiters all came to the front of the restaurant and popped bottles of Veuve. I wish I had gotten a video! Love that sounds.

We made it to the front of the line and they showed us to… quite a crappy table (bad light, corner cutting off about ½ of the view, etc.). Sal was kind enough to go find them and ask them if we could be moved. We sat at the less-than-stellar table waiting to see what could be done. After a few minutes we were moved to a significantly better spot.

So yeah. It never hurts to ask. Especially since I had made the reservation quite a while ago…

The food offerings were impressive, to say the least. If you are not a foodie, sorry. This might not be the post for you. This food demanded to be remembered, though. 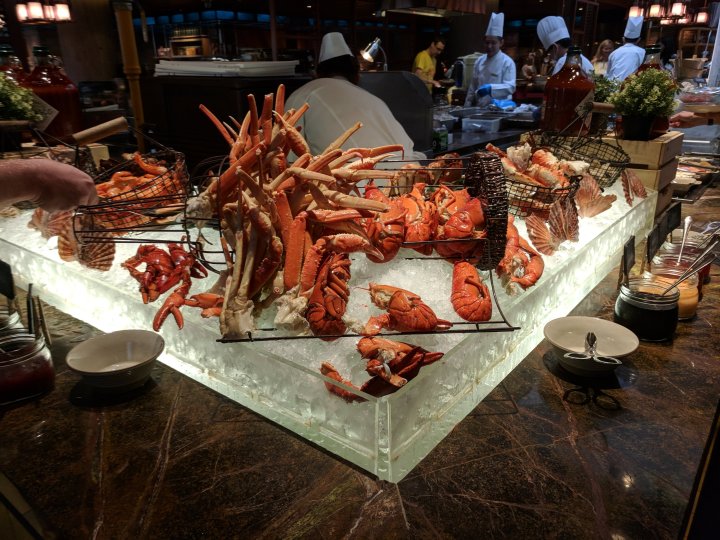 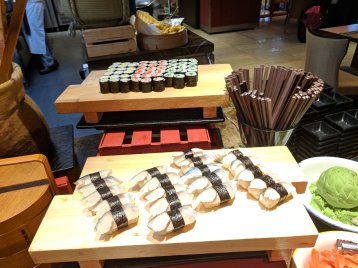 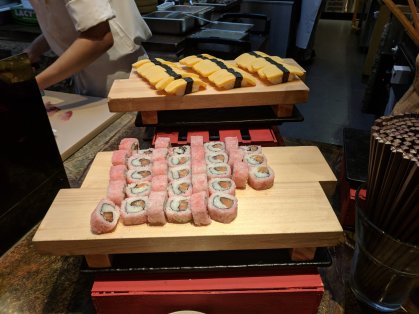 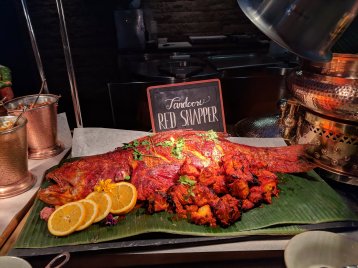 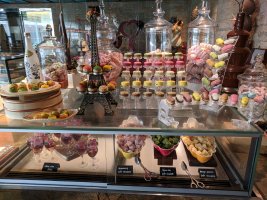 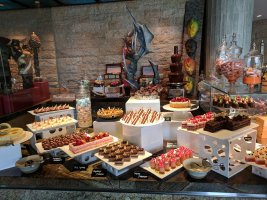 The seafood offerings were very impressive. Delicious oysters, and the crab legs were as big as the ones we’ve had in Alaska. The woman at the table next to us really enjoyed her seafood, as well. A couple different times it landed on our table (and Sal said something bounced off his head at one point).

We ended up staying there for two hours. Wow. I had to take a picture of the dead soldiers being rolled away.

We decided that we would go to Sentosa Island. Here is the description:

Sentosa is an island resort off Singapore’s southern coast, connected to the city by road, cable car, pedestrian boardwalk and monorail. By Sentosa Station, Tiger Sky Tower has panoramic views that can stretch as far as Indonesia. On the south coast, Palawan Beach is lined with food stalls and bars, and has a suspension bridge to a small offshore island. Palm-lined, crescent-shaped Tanjong Beach is more tranquil.

We bought cable car tickets through Klook to save a few bucks. We got a taxi from brunch to the cable car station, and had a driver that we literally could only understand 15% of what he was saying. Wow! We did understand when he asked us why we let Trump get elected, though. Side note: I keep forgetting to tell people we are Canadian so we can miss these sorts of conversations.

The cable car line was quite long and took about 30 minutes, and it was the only time we had to share a car with other people. The views were quite nice. 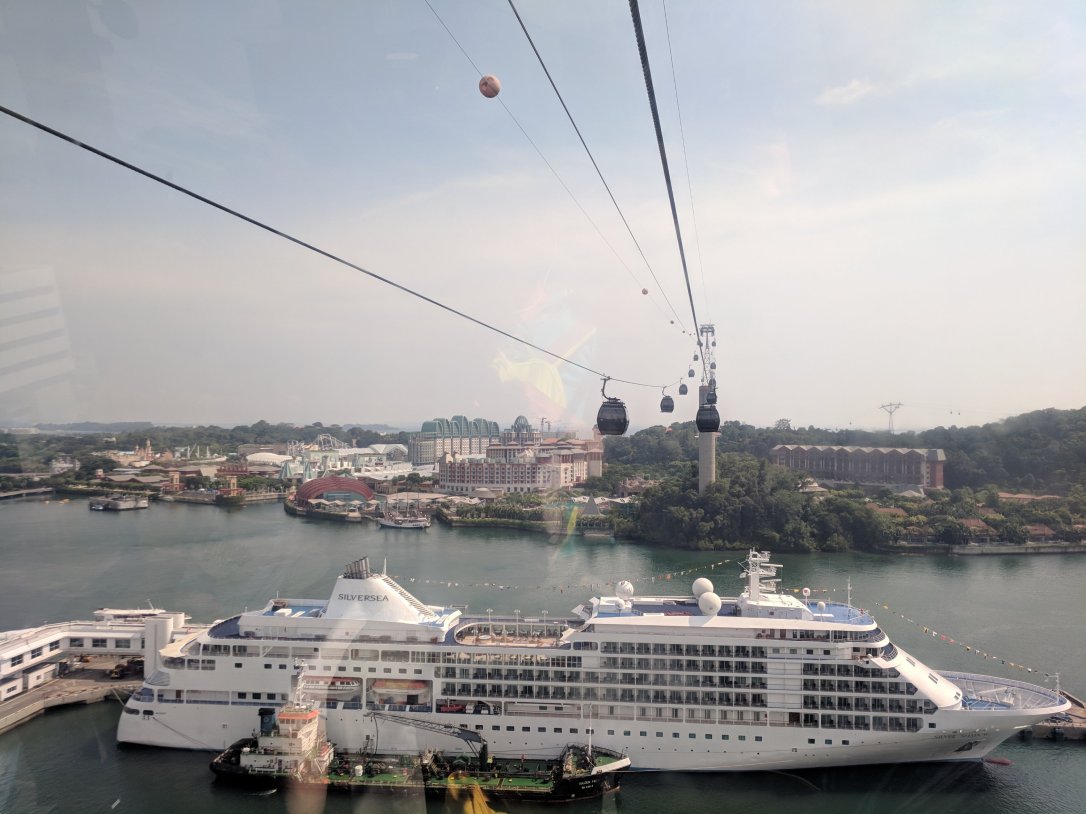 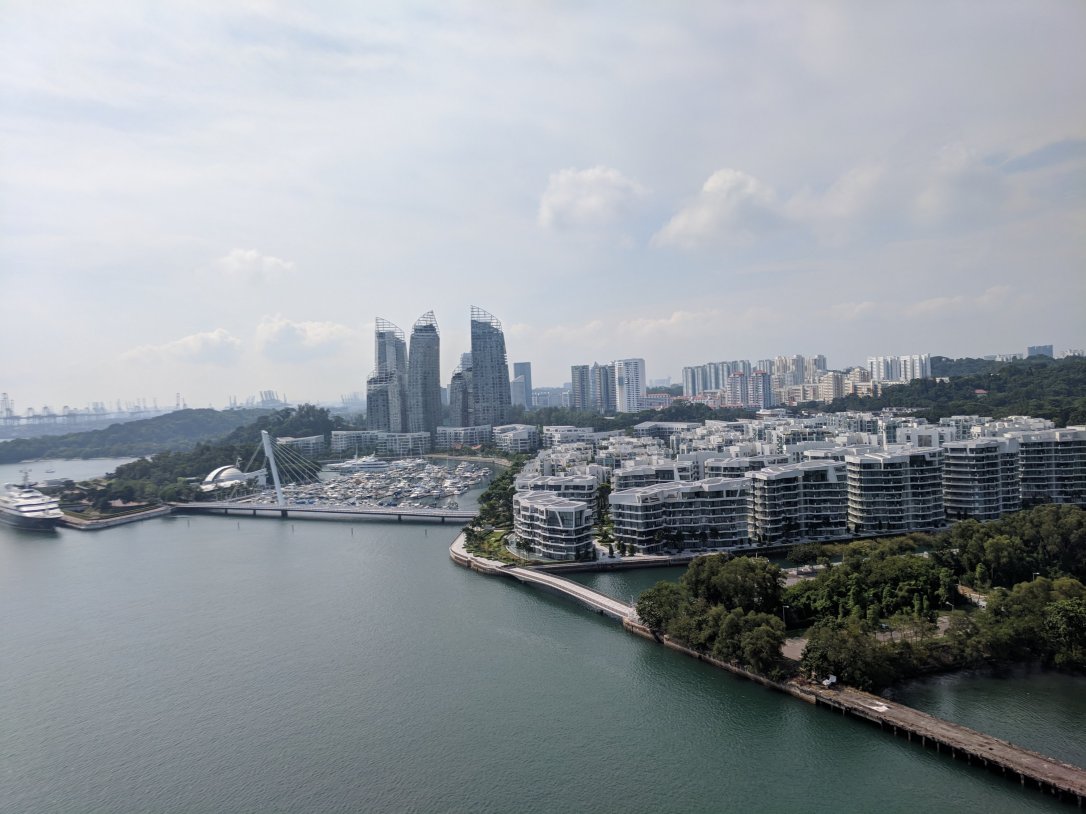 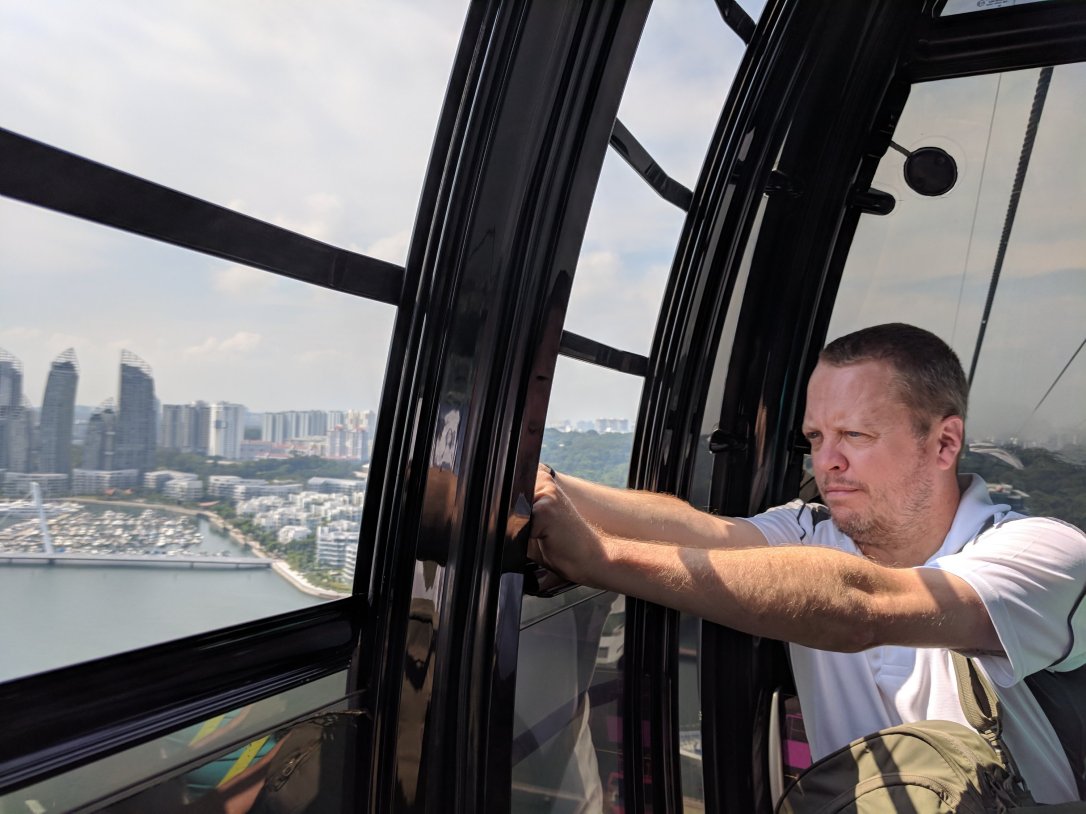 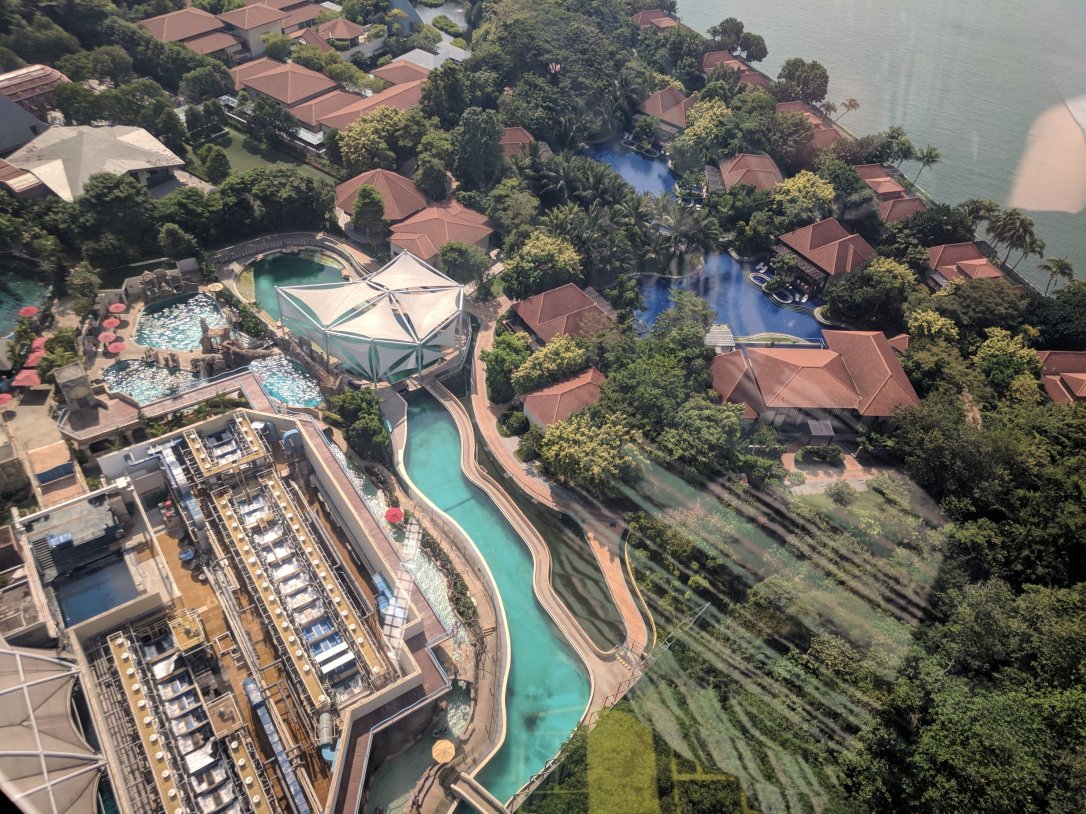 Once we got to the sentosa, we decided to do this:

While we were waiting in line, my heart was doing this:

Which ended up being silly because it was quite fun and not scary at all! The line was very long for the first run (45 minutes), but if you had more than one run you could take the fast track line and have subsequent rides basically without waiting. We did the easy route the first time and the faster route the second. Actually, the ski lift after the luge scared me more (fear of heights)  than the actual luge did. 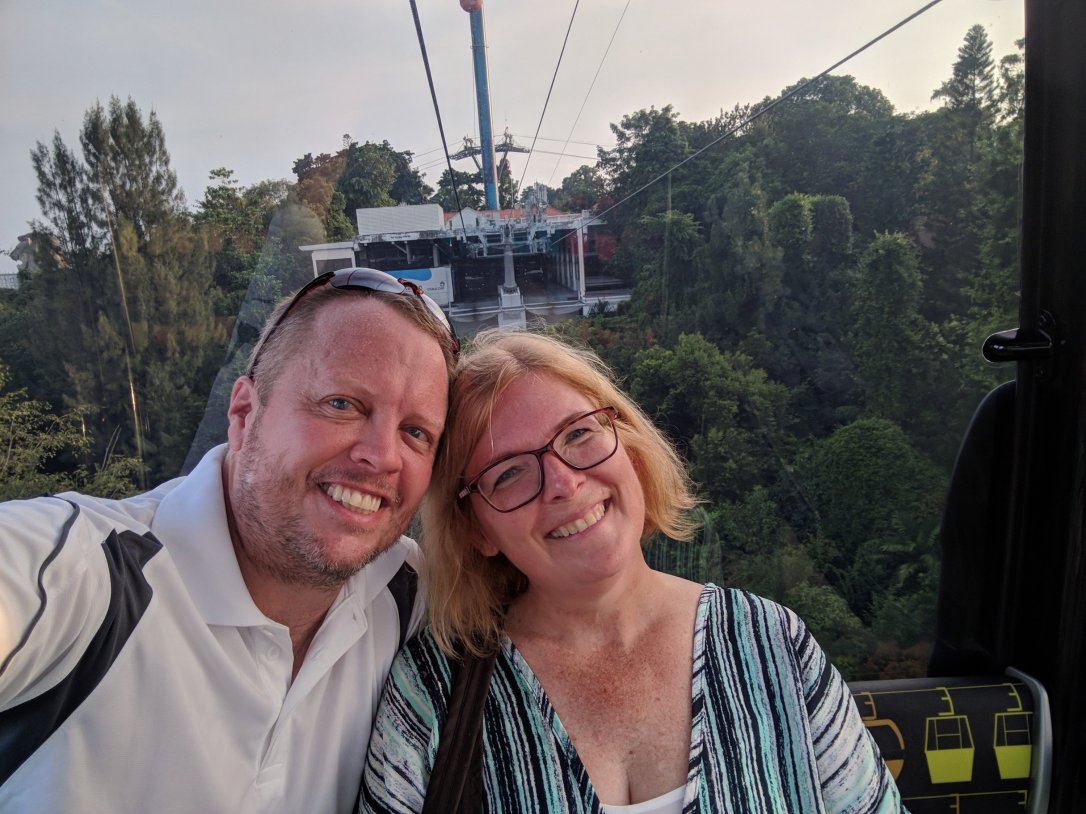 After the luge we decided to take the other cable car line that is only on Sentosa to explore a bit. We ended up going up on the skywalk to Ft. Siloso . It was 15 stories up, I think, but it wasn’t very scary because it was about as solid as you could get with a wide cement walkway. Here are some pics from the walk:

We got to the Fort, and it had closed 15 minutes earlier. That was OK. We decided to walk the trail on the way back instead of the skywalk, and found this fella, who literally honked at us.

At least we didn’t run into monkeys. There were signs warning that they were around. Dodged a bullet there. We decided to ride the cable cars back to the mainland and get an Uber back to the hotel. We saw this at the station:

Instead of vending machine OJ, we decided to have a nightcap at the bar.

And called it a night.

It was another steamer. Note the time of this screen cap. I am not exaggerating when I saw that it’s freakin’ hot here. Air conditioning is a gift from God.